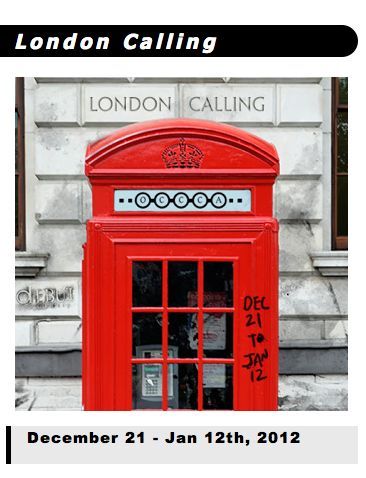 As an avid follower of the LA art scene myself, i stumbled across this exciting show.

A Britsh contingent of 30 emerging artists are hopping across the pond to colonise the OCCCA for 3 weeks. The Orange County Center for Contemporary Art is known to present cutting edge artwork since the 1980’s.

It certainly doesn’t seem like this group of fledgling YBA’s will be anything other than cutting-edge.

Picked by the OCCCA Executive Directors and Curators for their talent, freshness and undeniable Britishness. The show centers around the culture and vibrancy of the London and LA scenes, with works such as ‘Benji’ by Victoria Heald which references a pose taken from Antonioni’s iconic 1966 film ‘Blow-Up’ – the epitome of 1960s ‘Swinging London’.

Perhaps the most exciting thing about this collective is that in our climate of limited art funding, the artists have taken it upon themselves to promote and raise the profile of the London Art scene overseas. This week an article was published by Luciana Bellini recognising them at the forefront of the biggest movements in the contemporary art scene today. The artists are working collaboratively to come up with creative solutions, opposing the diminution of diversity in art, and extending the reach of UK arts: Fundraising to get as many of the talented artists to LA as possible, to be true ambassadors of the London art scene. They are empowering themselves to create their own opportunities. Find out more on their fundraising platform and Etsy art shop.

In our economic downturn, artists are loosing the financial opportunity and the space in which things become possible, and where new ways of thinking and being can arise. Shrinking the artistic and creative culture in the UK is a great loss. Artists need to work collectively, come up with creative solutions, which is what this new collective is all about. “We are raising our own ‘arts funding’ to achieve more out of this amazing opportunity we have been presented with” said artist Nicola Anthony

The Debut Contemporary artists were invited to show at OCCCA – having been discovered by their Head of Outreach, Joella March at a unique LA Art Fair which they were showcased at during September 2011, alongside some of LA’s leading artists, curators and art industry heavyweights. During September, the artists attracted attention from the likes

of LACE of Hollywood Boulevard and MOCA amongst other galleries from the buzzing Los Angeles art scene.

Samir Ceric, Director of London’s Debut Contemporary notes passionately, “I feel this is just the beginning of a very exciting project which has come out of this unique way of collaborating between Debut Artists and art professionals in the industry… One of Debut’s very important roles is to serve as conduits of information and opportunities between the Debut collective and community and the art world at large.”