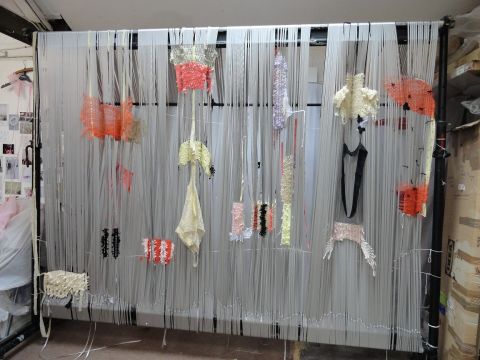 Offerings, a new work by Lucy Brown, created as a result of a period of development, supported by Arts Council England and The Theo Moorman Trust for Weavers, was seen in the project space at Collect, May 2012 and at the Holden Gallery, University of Manchester, July 2012, in two different representations.

Lucy Brown has moved into a new way of working after a complete questioning of her practice. This new direction has been a few years in the making, and the decision to continue practising as an artist was fuelled by a desire to take a different approach, technically as well as conceptually.

This process and the work, as a result, appear entirely experimental; she has embraced doubt and uncertainty, allowing the work to be seen as an ongoing piece/work in progress. It is not finished, and in the future there may be several representations of it, and in different locations it can and will invite different readings.

The first phase of developing the work on the loom ended with the public Studio Loom View(ing) event. The artist was considering the forms on a vertical plane of the loom, and the relationship of each of the nine forms to each other as a whole. In the cutting down, the piece is ready to be reincarnated as another piece entirely. Where the cuts were made dictated what form the next stage took. There was a considerable element of chance at this stage, which was accepted.

Using the architecture of the space she has made an installation where the columns or available uprights, become verticals for ribbon and reconstructed textile figurative elements. Walls also hold ribbons so that the piece appears stuck, in some way. Within the web of ribbons at head to toe height, you notice that the foci of intense activity are three or four reconstructed garments, similar to those in her past work, but they have different personae here. They are less reminiscent of the past wearer, and more evocative of the human body. Each one has a subtitle, suggesting its own narrative.

In this new body of work, the boundaries are extended beyond the standing or hanging forms of past work such as ‘Squeeze’ and ‘Petti-fur-coat’ – a space approximately three by three metres is made with ribbon and textiles which make up structure/ skeleton/ tension lines of Offerings.

In the open spaces are hung garment fragments, trapped in the ribbon or a yoke lying on the floor. The body is evoked clearly in some areas. Linking these together are lines, formed by grey ribbon which define the ‘spaces in between”. They also act as lines in this 3D drawing.

Ribbons are the ‘warp’ as well as carrying meanings beyond this usefulness. Brown’s research led her to the exploring the ribbon as an enhancement to a working class outfit, and the choice of grey over pink became more charged by the discovery that the grey ribbon is being worn today to support mental health charities and organisations working against abused elders, as well as sex trafficking. LB saw these associations as positive, giving darker side to the usual ‘pretty’ image of ribbon.

Offerings is not clearly defined by artist as a single piece; its umbrella title, with subtitles which suggests a reading of separate pieces meeting each other within a single space, and having conversations.

The three narratives (in discussion with the artist at Holden gallery)

The earlier work around the figurative form was a starting point – when the garment sometimes dictated the ‘personality’ of the piece and they evoked characters of previous wearers. In Offerings, we are introduced to three ideas evoked by a word or phrase which give us an insight into LB’s concerns into the continuing inbalances of the relationships between men and women.

As with previous work, she has woven using discarded garments which speak to her in some way. Here a yellow ball gown, there a Marks and Spencers night dress, garments epitomising femininity, become, in their mutation/transformation, emblems and points of protest, happening, and conveyors of dialogue and resilience/resistance.

The three/four elements started off as ‘siblings’ on the loom, where LB was closely aware of their negative spaces, their relationship to one another. When cutting them off the loom, in a sense severed all connections between them, they became 6 individual forms, which were then to be worked up into another performance, suspended in space, in conversation with one another again, reunited.

1. Bit of Skirt -these are pieces literally made of pieces of skirt. LB overheard builders using the term, which seemed to her a tired cliché, but no less derogatory for its dated quality.

2. Try not to breathe – the pieces of cloth are neck related or look as though they relate to the chest area. LB sees this as a vulnerable part of the body, identified with breathlessness, or not breathing when we are scared and gasping or suffocation.

3. Waiting for you to….this is ideas of waiting, being passive, in attendance on someone, or dependent on the action or word of someone or something else. There are songs of Nina Simone and Ella Fitzferald which often refer tot this sense of waiting. This piece is the most overt and suggestive, the opening suggested by an open neck of a dress/petticoat/nightie is also sexual, and being at knee height takes on a strange, prostrate nature. The whole piece is around 6ft in height is a vulva like, closely woven form, and quite structured.

The space was a small room within Offerings filled the space, and there were few ‘openings’ – physical or emotional – for the visitor to inhabit the piece, in a way that was possible at the next showing. Looking at the work from the outside looking in was almost frustrating. Lucy had little time between cutting off the loom and presenting the work, and the installation ‘window’ at Collect left little time for experimentation.

However, it provided a useful and high profile context for the work to be launched, though there was little time for the artist to consider the presentation and interpretation of the work. The artist referred to this second stage of the work on her blog, as ‘limbo’. The lessons learnt fed into the next showing.

The work was much more successfully presented in this space, and you were able to see it from 270 degrees, as well as feel more surrounded by it.

There is a melancholy grandeur to the work, and it reminds me of the ungainly experimental painting by Picasso, Demoiselles D’Avignon, with its new ideas emerging awkwardly yet unashamedly, and leading the way for new work to follow.

Lucy’s Blog charts the journey of the piece and the documentation which can be viewed with the piece, informs you of the whole process.

‘Lace Works’ is part of ‘Lace: Here: Now’ – a season of lace exhibitions and events that celebrate the heritage of the Nottingham Lace industry and demonstrates that lace still inspires, fascinates and excites. www.laceherenow.co.uk

Kate Stoddart is a visual arts curator with 25 years experience of development and delivering the following in the public and private sector: exhibitions, public art, commissions, events, & publications. Her work includes advising & mentoring organisations and artists, as well as researching, writing & fund raising.

She is working for the National Trust, developing contemporary art, in partnership with Jane Greenfield, creative producer, to initiate and embed a two year contemporary art programme with three properties in the East Midlands region.

She received a Sparkplug (Crafts Council) ResearchÂ  & Development award to develop a contemporary craft project in 2013.Â  She has worked with Designer Maker West Midlands as an artists mentor (Future Forward 1& 2) , and is an Artistic Assessor for Arts Council England 2010 - 2011.