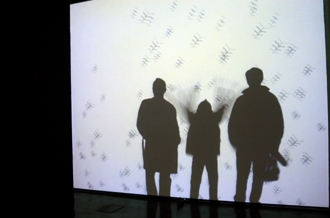 There is no such thing as a passive experience. With ‘interactive art’ and the increased usage of technology by artists and in other aspects of contemporary culture this fact is often overlooked. A reasonable argument might be that the less the inventor does to direct the user's experience, the more the participant, spectator or navigator gets from it. Related to this in the 1960s Marshall McLuhan coined the phrases hot medium and cold medium to describe an important difference. A hot medium leaves less for the imagination, little room for manoeuvre (possibly even actual physical manoeuvre), gives the receiver everything possible. A cold medium does as little as possible, leaves spectators to fill in the gaps or engage in a more active manner if they choose to do so. A photo might be hot relative to a drawing, a lecture hot compared to a seminar or television hot compared with radio. Clearly though, life is more complicated than this.

Shilpa Gupta’s untitled work at the current Lyon Biennale gives passers through the option to do nothing, a little or a lot. Five individuals at a time enter a space to discover their silhouettes projected on a wall a few metres in front of them. Initially wave-like abstract moving imagery appears in silhouette form too, near the figures. Other stages follow involving digital shadows and moving shapes corresponding to objects and figures of various sorts. It is possible to interact with these projected shadows through shifting oneself, waving, moving limbs, turning for example. Artificial Intelligence behind the scene means that an animated figure which appears at a certain point is able to locate suitable gaps between the digital shadows of the five participants. The outline (of a girl) makes gestures, calls for a response. And therein lies one contradiction. For most passing through, the cold medium suggestion turns out to be an illusion: there exists less scope for freedom than initially imagined.

I’m proud to say that a friend and I stuck to our plan not to move at all but everyone else acted predictably, as if 'interpelated' or controlled by some invisible director. Not only that but astonishingly this refusal to play along met a frustrated response. One of the five demonstrated their anger at my friend’s refusal to do the obvious and interact with the ‘needy’ animated silhouette.

Of course a similar issue surrounds the viewing of painting or sculpture. In the case of a stationary artefact spectator activity is not so evident but presumably the majority are affected and engage in a similar way to each other. Which is risky speculation. Important fulfilment comes from knowing that I might bring something different along. In fact an effective creator or artist permits me to bring something different along. And against the, now mundane, backdrop of hyperreality in everyday life, where McLuhan’s hot media appear to have won the day – look at advertising, cgi-enhanced movies, computer gaming, the nature of most information provision, pornography, the arts and entertainment generally – the rarer incidences of cold or, like Gupta’s work here, cold-hot phenomena are rendered especially poignant.