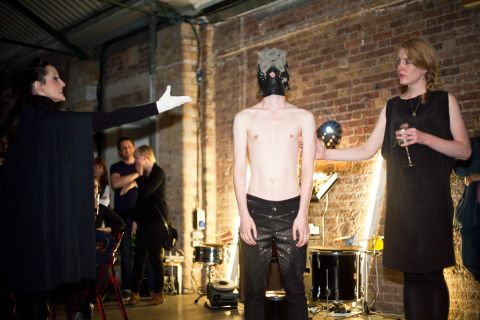 The embers of an online debate which arose in response to an opinion piece, http://www.culturewars.org.uk/index.php/site/artic…)published in October, continued to burn and crackle for some time afterwards, and rightly so. The discussion (now archived on Disability Arts Online http://www.disabilityartsonline.org.uk/colins_blog…) followed the piece’s criticism of Rachel Gadsden’s presentation and her project work with the Bambanani Group, for Unlimited Global Alchemy. I didn’t attend the UGA event myself, although I did see the performance, Magnetic Man, by the artist Roberto Ekholm which was staged at T.R.I.A.L: Does Dark Matter? an evening of art and performance curated by CosmicMegaBrain. In light of these recent discussions, it becomes impossible not to situate Ekholm’s performance within the critical context of this debate.

Since the article had been written in review of the UGA event, some critical analysis of contemporary experiences of HIV diagnosis and management across the globe may have been a reasonable expectation. Stigma, fear and misinformation still affect how HIV is perceived around the world and so it is fair to say that the virus is not approached with the same moral neutrality as influenza, for example. Perhaps this could have been an opportunity to expand upon and develop narratives to challenge those stigmatizing or moralistic assumptions that serve only to inextricably link the virus to ‘lifestyle’ choices in the West. The piece was, ostensibly, a comment on how definitions of ‘disability’ and ‘disability arts’ can be seen to be undergoing a process of revision, hastened perhaps by the sour taste of political and cultural sidelining. Anachronistic condescensions as to the aesthetic value of art therapy or art-as-therapy aside, the main concern, (and it seems, defence of the article itself in some of the posts), was a fervent preoccupation with authenticity, with ‘real’ or ‘genuine’ disability featuring as something visible, or at least visibly performed, and therefore comforting in its quantifiability. So, according to some, it would be the lack of definition offered by the ‘broad church’ of disability arts, as it were, that constitutes the biggest obstacle in thinking around blind spots affecting artistic practice, or indeed, any type of cultural production that deals with the body.

One of the criticisms levelled at the artist and co-ordinator, Rachel Gadsden, by the author of the piece was that she didn’t disclose fully or properly, the extent or nature of her own disability. I think that this goes some way towards emphasizing the risks inherent in performance and display, as well as in noting the marked difference between ‘talking back’ and ‘telling’. This moment comes precisely at a time when many are suffering at the sharp end of highly rationalized systems of administration, forced to ‘tell’ themselves in order to receive basic levels of much needed support, and made to do so in the blunting language of bureaucrats. In grim circumstances such as these, the assertion that identity and experience can and should be ‘transcended’, in order to attain some notion of artistic greatness is, frankly, bizarre.

In revisiting Roberto Ekholm’s performance for T.R.I.A.L: Does Dark Matter? I am prompted to think about how, on closer inspection, the artist’s subjectivity cannot help but reveal itself through its subject matter in this case. Ekholm has refined a practice of fictionalizing or re-contextualising characters, borrowed in part from clinical and medical histories but also from popular myths, cautionary tales and folklore. Working with photography, sculpture and performance, Ekholm explores belief systems, myths about the body, and concepts of health and illness. He is particularly interested in the mysticism associated with the use of magnets to treat illness, taking Franz Mesmer’s concept of animal magnetism as a point of departure for Magnetic Man. Ekholm’s photographs and objects use magnets and iron filings to evoke the transference of life energies between animate and inanimate objects, suggesting that the inorganic forms might somehow have been brought to life through these ritualistic ‘treatments’. Ekholm’s use of resin-coated stoneware, metal-work, hand-blown glass, found objects, charcoal and iron filings, to build prop-like constructions, stage for the viewer an intuitive resonance in materials, perhaps waiting in hope of alchemical or miraculous transformation. They remind us of the invisible forces and energies within the body, but also of those that pull and pressure the body from the outside too.

The substance of fact is treated differently in Magnetic Man though. In recalling the quack, the shaman, the expert, the confidence trickster, and the salesman, the performance becomes an honouring of mysterious forces: the power of suggestion, a respect for ambiguity, a transformative ritual, while simultaneously an act of public display or promotion. For Ekholm, there is a broader acknowledgement to be made here too, and that is to think about how culture consolidates relationships of power and privilege. In Magnetic Man, it is made via opera, the entertainment of the privileged, so that the figure of the healer (Mesmer) is placed in proximity to that of the artist (Mozart) since, as the story goes, a young Mozart had been commissioned by Mesmer to write the libretto, Bastien und Bastienne, for the occasion of his garden party.

As the soprano sings Bastien und Bastienne and the iron filings are poured from above and onto the magnetic man, the iron filings build up, distorting the contours of the face on the leather mask, and clumping together to form black, shiny stalagmites and awkwardly balanced protrusions that occasionally rupture and crumble. Presence, tension, ambiance, intensity, suspension of belief, and seduction- the performance itself has everything one might expect from a visit to Mesmer himself and, in fact, Mesmer’s own practice was nothing less than theatrical. Creating an atmosphere where absolute faith in his healing powers could be cultivated, he famously used the captivating, ghostly sounds of the glass armonica during his treatments, to induce his patients into a trance-like state or to calm them afterwards. Of course, the story of Franz Mesmer is deliciously rich stuff for the imaginative mind, not least because of the fluctuations in his popularity and the lack of verification for both the events of his life and theories. His reputation became irrevocably damaged not only by conclusions that his treatments were harmful, (to women especially, since it was thought that it caused them to ‘lose their inhibitions’), but by accusations of inappropriate behaviour towards his impressionable younger female patients. Though his theories remain unsubstantiated by modern science, there is a flourishing market for magnetic healing therapies, and this together with the strength of support for contemporary alternative medicines and therapies, does return us to those fine lines of separation where the showman, the healer, the charlatan and the artist, are all connected by a willingness to ‘believe’.

In Magnetic Man, the shifting balance of the hero/ villain role is manipulated to theatrical effect, referencing the detail that although Mesmer was revered for his miraculous powers of healing, so too did he become a hunted man after failing to successfully heal a number of important people at various points in his career.

Magnetic Man becomes a tool for studying how belief systems, political leanings and moral formations are subject to varying exertions of pressure and change, and echoes those movements of adaptability, corruption and resilience within bodies or in viruses themselves, for instance. Could it be that that the expanding definitions of ‘disability’ and ‘disability arts’ reflect a similar state of flux in a wider cultural sense?

In this vein, there is something intriguing about Ekholm’s work, because a full or literal disclosure of his HIV positive status is rarely given. However, his obvious fascination with medical knowledge and histories, as well as its transgressions, has a considered depth of context. Magnetic Man produces a subtle combination of metaphor and symbolism to work in such a way that any disclosure is only articulated according to the artist’s terms, and yet revealing the specificity of living with a chronic illness or condition. Ekholm could just as well be making reference to the profiles of other medical conditions, and yet it is the particularities of his own experience which drive the investigation into this area.

Since HIV diagnosis has increasingly come to mean a chronic condition, as opposed to a terminal illness, there is still very much a moral dimension that affects perceptions of the virus, and where belief is involved, that proves much harder to change. Conversely though, works such as Magnetic Man draw our attention to the great value we heap upon rationality, on evidence and hard fact, despite the subjectivising effects of opinion and belief that alter meaning over time. For Ekholm, it is a proximate involvement with illness, then, or rather, concepts of ‘illness’ and ‘health’, which operate as a way in which worldly and bodily relations may be read more widely.