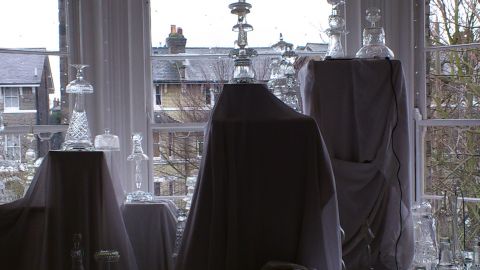 Walking into Xavier White’s front room gallery space is like walking into a spiritually uplifting, meditative sanctuary. In front of the vast bay windows, looking out over the heath, is an undulating landscape, draped in white, and bedecked with some sixty odd glass spires, lit up from within against the dark night sky behind. The remaining three walls and staircase are hung with Maia Spall’s rich and swirling purple, blue and magenta canvases, evoking a sense of movement, both of the ocean and sky from which she draws much of her inspiration, as well as of the spirit and soul. There is an all-encompassing eurythmy to the works, which carries you away as much as does the soundtrack of Gregorio Allegri’s choral piece, Miserere, composed during the 1630s for use during the Holy Week matins services in the Sistine Chapel, playing on repeat.

Gilles Deleuze (1925-1995) conceives of the entire universe as a series of folds, with the major fold being the point of contact between the lower level of matter and being, and the upper level of the soul, with the critical idea being that nothing is divided, but rather runs on as one unbroken continuum. Spall’s paintings capture this concept perfectly: their waves of colour bringing out the essence of life on both levels. Floating through Night, in particular, resplendent in its varying intensities of purple, yellow, and dark, dark blue, suggests a progression upwards from the scratched into and daubed over lower third, through a patchy middle, where one can catch glimpses of the prepared but unpainted white canvas gleaming through, to the darker, calmer upper band, where the struggles of life have been replaced by a sense of serenity. Interestingly, White claims to see John Everett Millais’ Ophelia (1851-2) in this work – either way, there is a peacefulness to it; an end to the stresses and woes of earthly existence.

The largest piece in the exhibition, Landscape, hangs opposite the windows, an immense altarpiece behind a draped shelf, again lit with White’s exquisite spires. It is flanked by smaller figure studies (enchanting, but not as fitting as the abstracted landscapes), seascapes and coastal studies (Spall moved from her native South East London to Whitstable ten years ago). Although the influence of J.M.W. Turner (1775-1851) is apparent in works such as Sea Light and Ships at Sea, the colour scheme remains very much Spall’s own.

Trained in art therapy, Spall explains that she works “intuitively, usually as an act of expressive improvisation, musically not unlike the exploration of a free-jazz piece, […] becom[ing] absorbed with the movements and rhythms of light, colour, and composition.” It is perhaps no surprise, then, that her work has such a strong sense of breaking free: capturing momentum, entropy, and the breathing of a wave as it ebbs and flows.