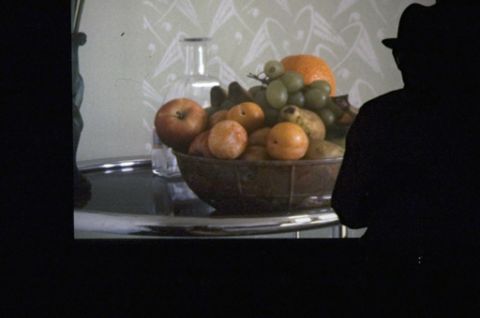 I am in the gallery at 5pm on Saturday. A sign reads ‘The performance will take place each Saturday afternoon at 3pm’.

I return a week later, and settle straight into the performance.

An immersive environment where each aspect acts separately, but does not feel too disconnected. Each feels like an alluring prop, gently trendy from the 80’s:

The chairs: Design prototypes, where the plywood mock-up becomes the chosen product. Watching a performance in a theatre; an audience. Although there is something unexpectedly athletic about this setup: a pyramid, a pack, a flock.

We sit together and view the performance as individuals.

The music, the pacing man (gesture), the voiceover.

The lit cigarette: A non-committal gesture, which causes a heap of admin when reconstructed.

The slideshow and screen: setup of a lecture

The projected images: setup of a domestic space, a café. Transient spaces of everyday life, which feel static and simultaneously do not need to move, since they are well-known archetypes. Similarly, narrative fragments that do not require the whole story.

Elements acknowledge each other and overlap, but do not infringe, giving the impression of being in many different places at once: a hybrid space. The man gazes at the screen, but not at the audience.

An intimate and sexual encounter between a man and woman that starts in any anonymous provincial café. An archetypal encounter that can take over an individual’s mind, causing them to pace around in circles, rerunning repeated fragments, and I notice that some of these words have been said before.

An encounter that is so generic, yet the voice of the writing does not sound cliché, and I wonder: maybe it’s not generic at all. Too engaging to be fabricated, yet not a strong sense of the directly autobiographical either. Perhaps it’s about something else entirely.

A spoken narrative can be difficult to grasp onto, but attentiveness feels enhanced. Every phrase feels recognised, having read the text a week earlier: a pleasing surprise.

Do not worry if your focus is not acute: the documentation is there to be returned to. Being surrounded by the spoken words installed on the walls is a comforting gesture, granting permission to drift from the performance.

As the slideshow and voice draw to an end, the 80s synthesised music from the beginning crossfades in once more, reminiscent of a dance in any anonymous dark club. For me, it conjures sounds of stomping in an acoustically pleasing alleyway: a certain Harringay Passage.

Something that I came back to:

Of the two travellers it seemed one was fragile or delicate, the other strong…

One assertive, one withdrawn…

Which was which was unclear, or rather, they were within one condition…

As one acquired clarity, so the other lost focus…

Much time is spent in description, within sensations… in shifts of mood, and in ambiguity… so rare scenes of activity, occasional moments of action, seems as incongruous as scars on delicate flesh…

… dwelling on ills and pleasures…