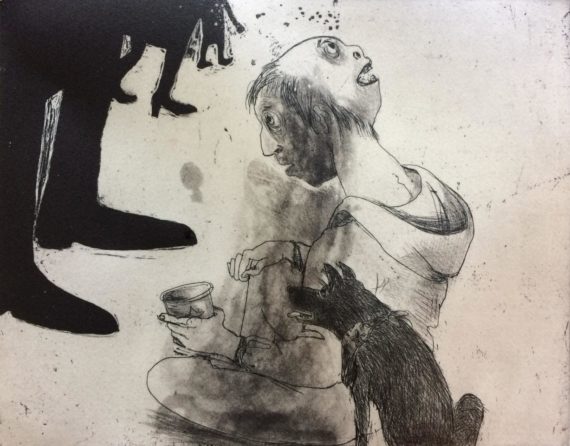 In May this year I saw nine prints from Marcelle Hanselaar’s series The Crying Game at The London Original Print Fair at the Royal Academy of Arts, Piccadilly. Looking carefully at them could not be called an easy experience, but it is compelling. They are full of the depths of human misery. War, abuse, cruelty. Man’s inhumanity to man, and man’s inhumanity to women.

However they are beautifully crafted works, using etching and aquatint each one seems to introduce a new technique. They were worked on in pairs, and the shift from one to the next is fascinating when you can, just for a short while, put away the subject matter. But the visceral attacking of the plates, or the tender rubbing and mark making which creates such three dimensional chiaroscuro can almost be physically felt and this feeds into the human response demanded by them.

Of her source material Hanselaar says: “My imagery comes from my imagination of reading snippets in cheapo broadsheets like Metro, I never listen to the radio [ever] and rarely watch the news on TV, nearly everything is reading or hearing in a kind of roundabout way, not straight journalism, which kick starts my imagination and empathy. And some might come from filmed documentaries, not straight photography.” *

And in this way she gives the prints something which a photograph of atrocities cannot do. She has responded, felt, focused in, composed, and worked on these images until they were right. Only once did she have to abandon a print. Every other time she has been able to scratch, scrape and salvage an image into life, and that energy demands that we look and that we cannot turn away. We are compelled to identify and respond. These people could be any of us in other circumstances.

I have been thinking about why I found seeing the complete set of thirty prints together a cathartic experience. For three days only (and I’m afraid those three days ended on November 2nd) Julian Page exhibited the whole set at The Herrick Gallery Piccadilly. This coincided with a book launch of the complete set of The Crying Game so it is now possible to see them in another format in a beautifully produced book.

Does that mean the set is finished? That all of human misery is contained in one place? This is where the catharsis comes in. If that is so, if Hanselaar has looked and seen and decided there are no more, it is all there, then we can breathe a sigh of relief. Now there is room for the last remaining piece of the human experience to emerge, and that is hope.