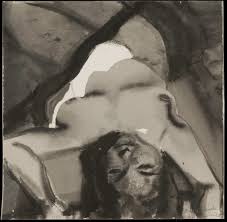 I first met the work of Marlene Dumas at the Pompidou centre in 2001, at the time I was subsumed in a push-pull experience between entrancement and awkward self-consciousness. As a bloke staring up close and personal  at cocks, cracks and arseholes I was given plenty to think about beyond their quality of mark.  It was a sublime painterly exposition of the ‘male gaze’ and my maleness plonked me slap bang in the discourse. To write at this juncture using the biological terms of penis, vagina and anus would seem, while correct, to miss the point.

This ability to disarm, and dislocate the viewer via the activation of mixed visual codes dominates this show at Tate Modern.  Marlene Dumas achieves this in a highly articulated range of strategies. Powerful, political depictions of black Africans are just one of the core things she tackles, but let’s start with the works  as painting. With many of the works in this impressive body there is an effortless oscillation between demonstrations of highly skilled representation to wonderfully clunky and miss-shaped daubs of crude painting.

The fluid application of paint creates a highly impactful visceral quality in relations to the skin tones and fleshy body masses.  At other times when the naturalism almost drops off altogether, Dumas always achieves an anchored ‘bodily’ essence with fluid washes comparable in looseness with Auerbach’s trowelled on paint at the ‘heavier’ end of the painting spectrum.  She manages to capture the essence of an eye, a head or a nipple or arsehole with an almost invisible swish of watery mark, but it is always emphatically there.

Her subject matter is predominantly ‘dark’ several dealing with harsh treatment and cruelty towards black African’s, male and female, but beyond narrative she conveys something rare in contemporary art. I would describe this as ‘odd’ in a poetic manner.  ‘Odd’ alone is relatively easy to achieve but ‘odd’ with poetry is a much bigger mountain to climb.

There are images where the subject is anonymous, and other where the subject is recognisable, either from appropriated press imagery or due to the celebrity status of the subject.  Like in the image of Princess Diana next to Naomi Campbell titled ‘Great Britain’. This contrast of a crude painting of the black super model  next the depiction of Diana  with its tighter allusions to Gainsborough, juxtapose different iconic associations. I get the feeling Dumas has a lot of fun making paintings despite the profundity of her work. She is an artist at play within the canon of representational painting.  The same room is dominated by large vertical canvases of sexually encoded images of women, including one of a woman touching  herself up. There is the inclusion of a solitary naked male figure looking back towards these women with piercing, menacing  eyes. Together they create a powerful visual discord.

All the work is tied up in the process of looking and arguably ‘gawping’ rather than gazing. As a viewer you look and many of the paintings stare back at you. The eyes are often blurred and washy and create a sense of melancholy emptiness and dislocated awkwardness. There is a huge amount of works on show here and many give delight, like the paired images of Phil Spector both with and without wig, very funny and well painted.

Dumas highlights the media world with efficacy and deals with sexual and racial objectification with dynamic impact. But more than that, she translates it into sensual, fluid and masterful paintings and that is what struck me the most. She is first and foremost a fantastic painter making paintings. Paintings which reference both the history of art and the media world that dominates us, but above all paintings and all the possibilities that  offers. I took in the ‘heap big medicine’ Sigmar Polke show at the same time and while wholly impressive, if art were comedy, he struck me as closer to a Michael McIntyre in terms of his sleek, cool professionalism, skipping across the stage on Friday night TV with a big ‘Hello…’ While Dumas for me is more of a Jerry Sadowitz, much more uncomfortable, and all the more richer because of it.