Martin O'Brien, Breathe for Me - a-n The Artists Information Company 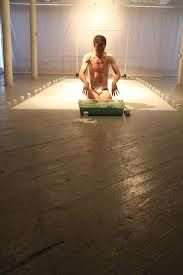 5:04 PM – 15 Feb 13 Martin O’Brien #IBT13 – hand out before him, he can’t see through the latex hood, he feels with his foot, touching his toe to find the edge. / he checks his blood, takes his temperature, urinates, eats a biscuit, drinks; the green clay in a footprint pattern / he inserts two needles into the skin of his right abdomen; with latex gloves he unwraps another; and another; six now / he is kneeling as he does this, behind him the white fourfold hospital screen, eight needles now. earlier blood dry

[The audience is seated on the floor round the edge of the space, along two walls mostly, and it is quite dark outside of the performance area, the catwalk that O’Brien staggers or shuffles down; it is quite warm, and we listen closely, watch intently as he goes through the repeated actions.]

5:22 PM – 15 Feb 13 Martin O’Brien #IBT13 – the room is quiet, we watch, he goes on; he looks up at them as some people enter; watches a girl leave, continues. / i can’t count the needles now; a cluster of them below his navel; little runnel of blood, dark from the sternum / he crawls to the tub of liquid green, dips his face and crawls back, wipes his face on the large wedge, and again / his face drips the goo, he shakes his head, he spits; he comes again to the tub; needles have dropped on his path;

[O’Brien engages directly with us at moments, looking out towards a particular movement or sound, when someone leaves he notices (notes) it, and reminds us that we are not watching a screen, not watching from some position that is invisible, disconnected, separate. The repetition allows the viewer to attend to details, like the drying and darkening and flaking blood, or the dropping needles.]

5:44 PM – 15 Feb 13 Martin O’Brien. #IBT13 – his body crawling arcs and twists in effort, clavicle rising, ribs showing, his falling, foot dragged onward, again / another frame pause; he goes to the table and checks his statistics, the cut-away pants facilitate the thermometer / the tedious repetitions of illness, of care, presented here as formal actions, for observation, to be witnessed. / lying over the wedge cushion he slaps his upper chest, to shift the phlegm, and then spits it into a sample bottle;

[This particular body, its forms and shape, its anatomy, is present and visible, in action, working, working through the sequence of actions, working against resistance of the phlegm, against exhaustion. We can see the specific movements of these bones, this skin, these muscles. We can also observe the actions the artist needs to perform, daily, in those other than art situations, everyday.]

6:14 PM – 15 Feb 13 Martin O’Brien. #IBT13 – he is engaged in a task; this chest beating has a function; and he is presenting this to us as formalised ritual? / his chest is reddened from the repeated slapping, he moves with more effort now, lets out a groan or gasp, goes on; / he has reached the tenth of 16 bottles along the right edge of his area, now the eleventh: he continues, another go / the woman sitting two along hides each time he spits in the jar, that is the bit she can’t watch; his casting out

[The work that O’Brien carries out as part of this performance, within this performance frame, is a work of living, of keeping going, of continuing, and it continues outside this frame so he can continue. His body is marked by the activity, it is written on the surface, the skin redder in the chest area, the blood tracing dark lines, the green clay catching in blobs on his body hair and in smears across legs or back. We count the elements, thinking ahead in the coming sequence, to urge him toward the end, or to press the process toward a finish. ]

6:36 PM – 15 Feb 13 Martin O’Brien. #IBT13 – a neat line, clear plastic with white lids, the sample jars are being filled, he moves now to the sixteenth; spits. / he goes to the jars with mucus, opens each, and removing the phlegm, smears the contents on his body, in his hair / he works his way along the row, methodical, from right to left, back, forth, i begin to feel nauseous, i look off / at the table he again notes temperature and blood and breath counts, and eats a biscuit, drinks, takes a ventilator

[And we each have different thresholds, or points of feeling overcome by the activity here, and for me this comes when O’Brien fishes the cold phlegm from the plastic bottles and plasters his body with it. Others have found earlier moments too difficult to watch, or to listen to, and there is some sense of embarrassment in this urge to turn away. The embarrassment is not (for me) in any sense of not being ‘up to it’ or strong enough to battle it out, but an embarrassment in recognising my privilege in having the choice to turn away, to opt out of this process. This is work that presents us with another person, but inevitably, without cliché, also presents us with ourselves. We are aware of our bodies in this space near together, hips or legs or knees touching, and recognise in the skinny near-naked body of O’Brien something that is shared. And then it ends, and we can relax, and gather our stuff, and go out into the bright foyer, and chat about what we’ve seen and move on to the next show. And perhaps we return to this all in sudden physical recollection at some moment when we cough later that evening.]