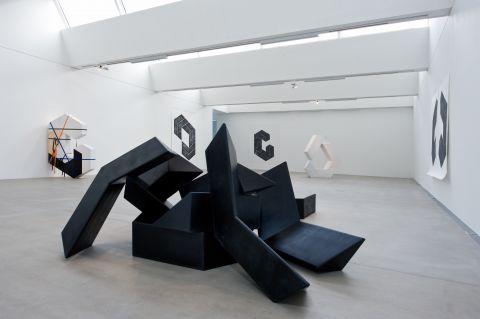 Art in austere times seem to flourish here in Newcastle, using uplifting conceptual ties with deterioration, revival and flux. Matt Calderwood (born Northern Ireland, 1975)’s first solo exhibition in a public UK gallery investigates these themes, and explores them amongst other key ideas that forms a new body of work.

Modular forms in constructed arrangements compliment the crisp industrial penthouse architecture that the show sits in. There are three sculptures that instantly demand inspection; one glossy white, second matt black, and third – an amalgamation. The matt black piece, Rubber (Pile) (2010-13) reminisces hard edge abstraction, akin to the sculptural series: Untitled by Garth Evans (1968) but sits in a playful arrangement that inhibits a tactile response. Scrapes on the floor from the gloss-white Ply (Pinch), (2011) insinuate the lifespan of the piece within this gallery context. The amalgamation: Ply (Strapped) (2011-13) fills the room with literal tension, while the sound-bleed from the second room (crashes, breaking and shattering sound) whilst enticing, sets up a co-dependency between materiality and response, with an interpretation of peril, destruction and transformation: this is met with further tension from their current stasis but with a welcoming nod to future altercations. Rubber (Pile), is much harder to pin down this way, but the elusive human traces, just oily fingerprints at the minute help to form a more specific timescale of the works.

Occupying the walls there are four large-scale paper pieces, Untitled (Rubber) ink on paper and three Untitled (Ply) gloss on paper pieces appear as contact prints of the sculptures in an unforgiving black. They sit quite humbly on the walls pinning down work in such flux. But still, they offer promise for change and also serving as a reference to the tangible again.

Tactile dreams become apprehended in an adjacent room with Mirror, (2013). A four minute, HD video of strip light tubing breaking and shattering, shards flaking and smoke leaking like a slow waterfall; all from an out-of-shot force. This destruction of something so constant and static like lighting reflects as a sculptural idea throughout the show and demonstrates the performative electricity of charging objects by simply re-arranging them. Such patterns of thinking have long been apparent in Calderwood’s work taking into account Plank (1998) and Tape (2004)

Exposure Sculptures (2013) are on the other side of the projection screen, basking in the video’s afterglow. They are interchangeable series of robust steel welded forms, with varying planes of paper covering the majority of the steel, set up in four stacked compositions. Unique in their installation, the first site behind a projection screen, and the second on the rooftop terrace, they ready themselves for Northumbrian weather. By the end of the exhibition paper has flaked off, metal panels infected with rust, haggard. The materials have grown weak and tired, this snapshot of an exact length of exposure treats the white cube as a stasis pod, holding the structures in a safe, controlled environment, perfectly contrasting its place of installation with blunt force. Bird shit, tears and pallet marked rust lines all form the aesthetic, giving evidence of their movement and endurance. Their arrangements before appeared modular and sublime now feel co-dependent and jaded. On the terrace, three pallets are empty, with one left to bare the brunt until the end. Exposure Sculptures has all the stains and traces of a performative installation, but with the action out of shot, the air around their deterioration feels that much more uncomfortable. Through the course of the exhibition these sculptures will be rearranged by the Artist according to chance, no doubt with the ideas that Hans Georg-Gadamer discusses in The Ontology of the Work of Art and its Hermeneutical Significance, specifically Play as the Clue to Ontological Explanation and further, The Concept of Play in mind.

The dynamic of Paper over the Cracks is absolutely contemporary, challenging the white cube through the observation of deteriorated materials, maintaining the freshness of the encounter by re-arranging works thought to be in-situ and through it, keeping the art-making process unquestionably paramount.