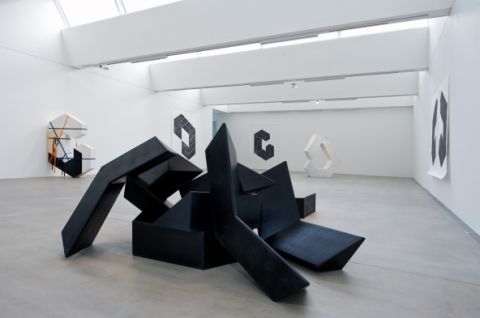 There’s a clinical sense of the unknown in Calderwood’s presentation at the Baltic’s auxilliary project space siteBaltic 39, a feeling somehow that one has emerged in a strangely familiar yet completely alien land. On the immaculately white walls hang futuristic pseudo-scientific cartographies and schematics, appearing to manipulate and distort space and time through their resemblance to Escher’s conundrums and other optical illusions.

Elsewhere on the ground lay sculptures in delicate poise, their configurations in one of a number of possible solutions. There appears to be a hint of mystical exoticism as if some power or function could be unlocked if the viewer could but try to unravel the sequence for the correct combination. The ambiguous sense of interlocking space brings to mind something slightly more than complex than a simple Rubik’s cube, something more akin to the fictional Lermarchand’s Boxand the Lament Configuration devised by Cliver Barker and featuring in the popular Hellraiser series of horror films. A tale whereby an explorer attempts to unravel the secrets of a puzzle box linked to another dimension. Although the exhibition’s aesthetics are less steampunk and obviously in line with a conceptual minimalism, think Agnes Martin or maybe Donald Judd and a hint of Gareth Jones. Its the high black and white contrasts, the criss crossing primary coloured ties resembling a de-constructed Mondrian or  the matte metallic sheen, the crisp smooth delineations upon which is founded our contemporary view of advanced but everyday consumer technologies. A seductive consumer aesthetic which has also been explored by recent Baltic exhibitor and Turner Prize winner Elizabeth Price in her excellentUser Group Disco, 2009. There’s definately something very pleasing in the balancing acts between the three dimensional and two dimensional represntative forms that is evident in this room. There’s something that just feels right in terms of the amount  of space utilised.

As a curatorial aside (and its hard not to discuss in relation to the current sister shows on offer by the always excellent Baltic Centre for Contemporary Art separately), parallels can be drawn with the exploration of (monolithic) illusory forms of David Jablonowski whose works appear hewn from the earth, slabs of giant marble meticulously etched and chiselled from the quarry, their only blemish, the dust of iron oxide. Upon closer inspection, a much more satisfying complexity is revealed (much like the production of styrene in fact) in which the works are revealed to be not actually made from stone but by styrofoam, their weight now instantly disappearing and revealing a sudden lightness and poise which was not present previously. Perhaps now a simple tap would cause it’s bulk to now shudder and collapse. Having only had an opportunity to view Calderwood’s show on one day it was unfortunately not possible to witness the sculptures weathering and undergo a reconfiguration over the course of the exhibition’s run (and hinted at on the Baltic’s website and publicity poster) but it neatly introduces a further idea of fragility inherent in apparently solid structures – after all, iron bridges will fall and even planets eventually burn out and die. It will be interesting to see in the future how the role of chaos and chance due to these environmental factors eventually affect his decisions in their reconstruction and to what aesthetic end. It is with hope that the Baltic will document these changes on the website. They form a neat opposition against Jablonowski’s styrofoam monoliths which are crafted from a fragile but non biodegradeable substance that appears as if it could last through the ages.

The source of the sound is finally revealed near the back end of the exhibition space, and the video piece Mirror(2013) is a highlight. Being fortunate enough to not see the video piece at the beginning of the space (where it is supposed to viewed) and without prior knowledge of the piece’s title the construct of the work is not immediately obvious as the mind constantly analyses the situation that is gradually revealed. The piece ties in with the graphic design motifs explored in other pieces in the exhibition and with each shattering, splintering crash further pieces of the puzzle are uncovered revealing abstractions that appear like the jagged neon forms from the early to mid 90’s output of legendary studioThe Designer’s Republic.

The sense of fragility and balance is again present as the light shards fall into an abyss, traces of their physicality only evident in the splintering cacophony and wisps of escaped gas that is evidence of their destruction. It was nice to end on something that is starkly beautiful, simple and so physical in its concept.