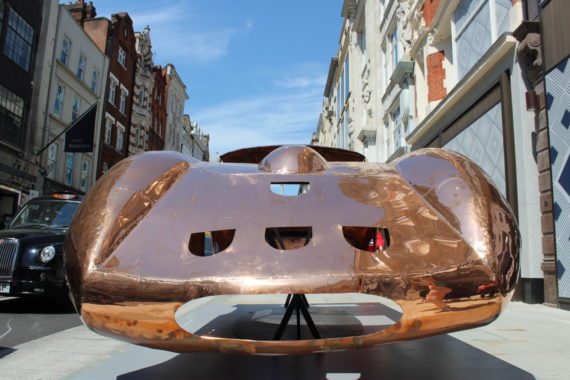 “Of course, there’s a humorous side to this piece,” says David Breuer-Weil, of his 12-foot bronze sculpture, Alien 2, currently positioned on the corner of New Bond and Clifford Street, slap-bang in the middle of London’s most moneyed district, Mayfair.

He can say that again. It appears that a gender-non-specific giant has just landed head-first from outer space, burying its upper torso in the concrete of the pavement, flailing its massive legs in a vain attempt to free itself from its newfound hell. 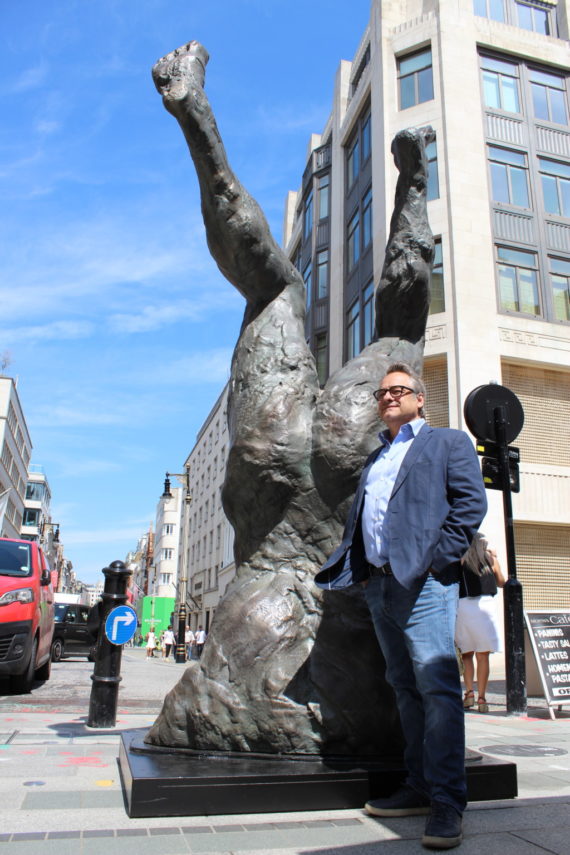 “But there’s a very serious side, too,” he continues. “My father was a refugee from Austria in the late thirties, who ended up in this city before the war. ‘Alien’ was the word they used for him, and many others like him. So it’s a personal piece, too: like most of my work, it’s about my family.”

David and I are part of a group being shown around this year’s Mayfair Sculpture Trail, by Cherie Silver, the project manager for Mayfair Art Weekend, the group that has co-organised the Trail with Art in Mayfair. The actual Mayfair Art Weekend, its sister gallery show, takes place later this month (June 25th-27th). We are a colourful bunch, of journalists and art-world insiders, delighted to be so personally introduced to this series of site-specific sculptures created from an international cast of top-level artists, in the open-air, on a beautiful sunny day. What better way to celebrate the art-world’s emergence from its pandemic-induced hibernation?

“Which is the best angle to contemplate your alien from?” I ask David, having just strayed into the cycle path next to the piece, and nearly collided with a slow-moving young man on a Boris bike. “From low-down, from behind, I reckon,” he says, but by the time I’ve got my camera into its right settings the group is moving on, stymying my photographic ambitions. 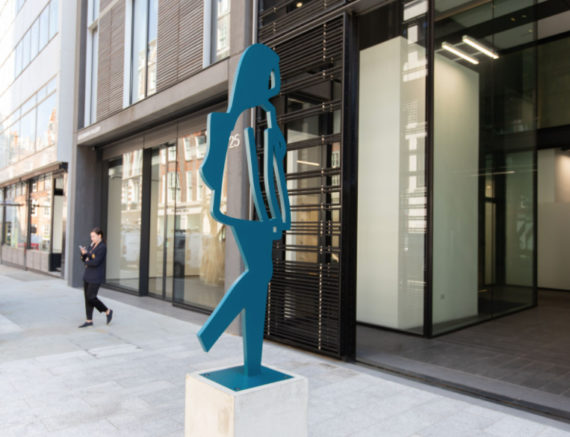 No matter. We’re soon looking at the life-size steel-framed silhouette of a pedestrian with a backpack, which is unmistakably the work of Julian Opie. Opie, Julia tells us, installed a camera in a traffic island near his studio and recorded the lunchtime pedestrians crossing at the lights in front. The point is, it seems, that anybody and everybody is a worthy model for a statue. “The artists weren’t given a theme to follow,” says Julia, “but like most of the entries this year (the second edition of the trail) the sculptures have taken on human form, with most of them, curiously, being gender non-specific.” Everybody and anybody as a potential statue? We’ve moved a long way from Edward Colston and co. 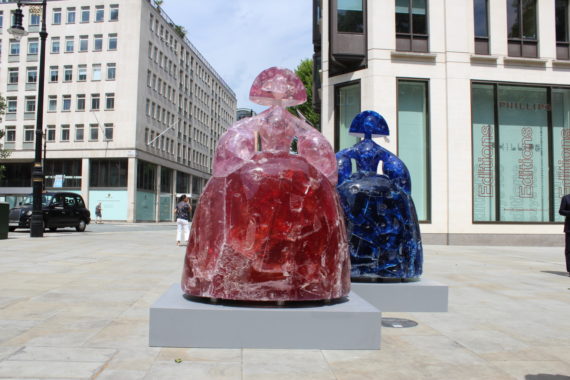 We continue our meander through those well-known Mayfair thoroughfares – Savile Row, Burlington Gardens, Cork Street – coming across surprise after surprise. A pair of seven-foot Velazquez-era Spanish Infantas by Manolo Valdés, seemingly gliding across the asphalt, in pink and blue resin, their curves a gracious counterpoint to the angularity of the buildings around them. A monumental white-marble head-carving on a plinth, Origin VI, by William Peers, demurely returning the gaze of the passers-by in Grosvenor Square. A two-headed ballerina, ecstasy self-portrait no 1 by Hande Şekerciler, its legs in the air, partially draped in a beautifully crafted bronze cloak, which slips from body to ground. An eight-foot-high hollow-eyed shell of a human face, formed entirely of bicycle chains, entitled Meditation 626, by Korean artist Seo Young-Deok. And, finally, the shiny copper chassis of a sports car – a Ferarri 250 GTO, according to its pavement caption – by Anthony James. This noisy, high-speed beast of the road, placed, perhaps, in its natural context, has been silenced and halted, stripped of both engine and function, and it is the most popular work of all those we have seen, with a hubbub of passers-by stopping for a selfie, the more petrol-headed among them notably excited by its shiny presence on the pavement. 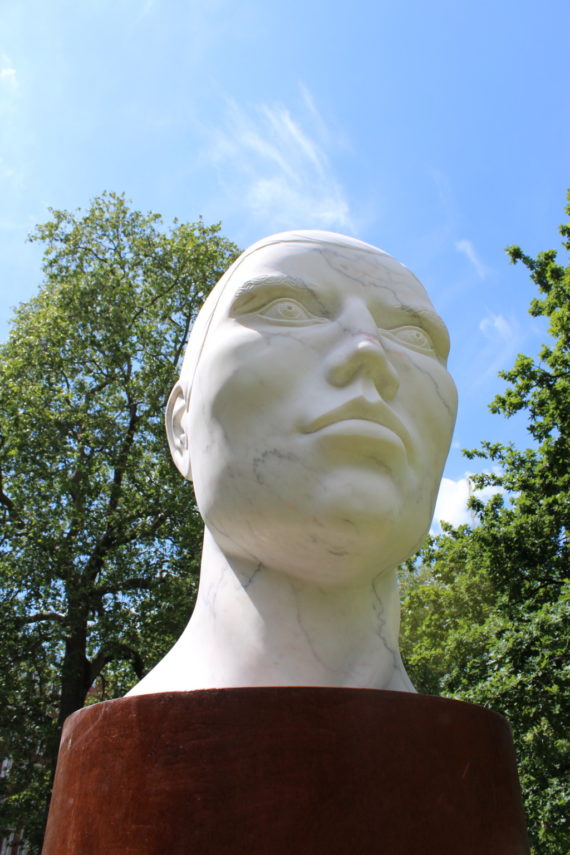 Of course, Mayfair is blessed with a number of permanent statues and sculptures, and these, too, are highlighted on the trail: an Antony Gormley figure standing sentry-like on top of Burlington Arcade; Lawrence Hofner’s ‘Allies’, the bronze figures of Churchill and Roosevelt, sharing a joke on a New Bond Street park bench; Henry Moore’s Time-Life Screen, integrated into the architecture of the shops below. There’s even a Banksy, his Falling Shopper forever halfway to a sorry end at the foot of a brutalist Bruton Lane tower block. 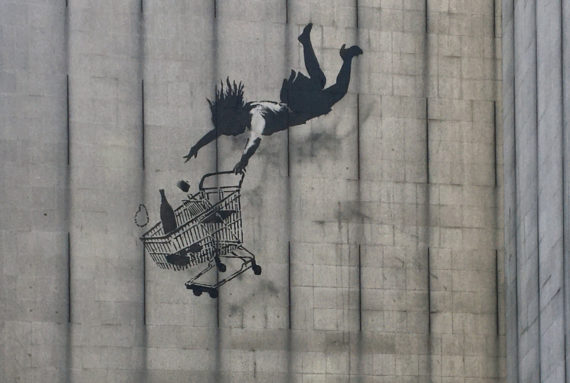 Each of the artists involved in the Trail is represented by a local gallery, and we visit several of these too, along the way, as a little taster, perhaps, for the Mayfair Art weekend to come. So the Lisson Gallery’s walls are covered with more Julian Opie works from the same series. Alongside a remarkable exhibition of works on paper by Joan Miro, Cyzer Gallery in Bruton Street is showing several maquettes by David Bauer-Weil, who has gamely stuck with us throughout the tour. David takes us through a piece he seems particularly proud of, two figures pulling away from one another, but nonetheless held together by malleable-yet-indestructible strands. “That’s me and my brother,” he says. “As I say, it’s all about my family.” 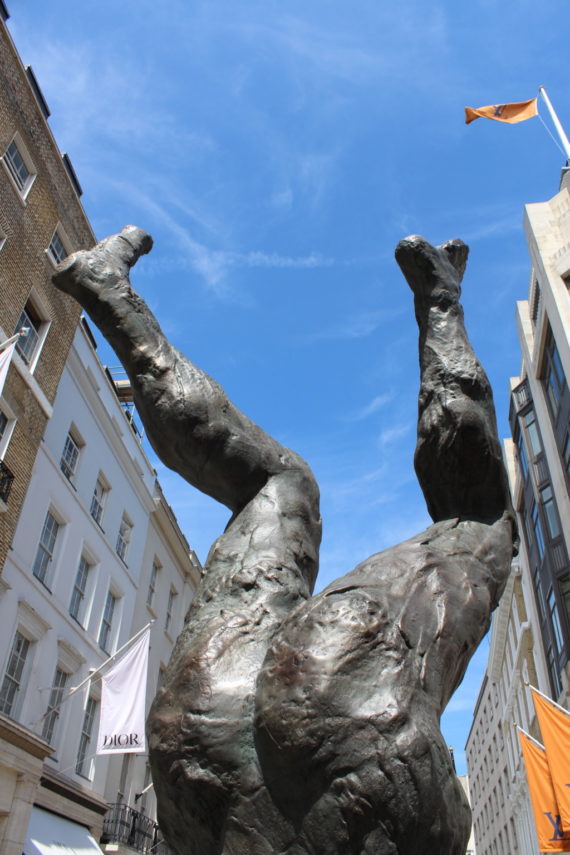 After the tour, I return to take the picture of Alien 2 from the angle that its sculptor suggested. And he was right, it’s best viewed from down near the ground, from behind, where the flailing legs are framed by the towering blocks of the high-rise New Bond Street stores. Humour meeting tragedy, on the pavements of London’s plushest shopping quarter: that’ll be the image that forever encapsulates my memories of the 2021 Mayfair Sculpture Trail. Go try yourself – just be careful of Boris bikes.

Join Mayfair Sculpture Trail at www.mayfairartweekend.com or on the Smartify App.