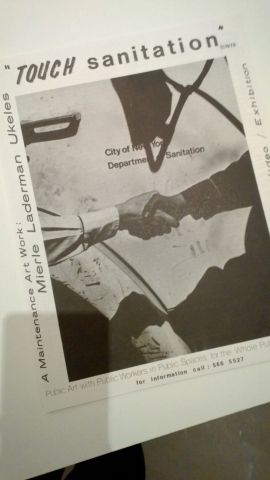 “I am an artist. I am a woman. I am a wife. I am a mother, (random order) I do a hell of a lot of washing, cleaning, cooking, renewing, supporting, preserving, etc. Also, (up to now separatly) I ‘do’ Art. Now I will simply do these everyday things and flush them up to consciousness, exhibit them, as Art.”

These are the opening words to Mierle Laderman Ukeles Maintenance Art Works exhibition at the Arnolfini, Bristol. In 1969 Ukeles fell out of the art world when she became a mother. In order to combat the oppositions between art and life she wrote the Manifesto for Maintenance Art. It was her re-positioning into art, highlighting the everyday and questioning what is defined as ‘work’ or a ‘role’, culminating in a body of perfomance work.

The exhibition contains documents and photographs that archive the Maintenence performances in a layout that can be described as ‘dry’, or as though the original intention was for these works to be presented within a book. The experience would be exactly the same, except you could be sitting down instead.

Presenting an archive in the context of an exhibition needs more effort in preventing a stagnant environment. Two video’s of Ukeles most well known performance, Touch Sanitation are presented in an individual manner. Television, headphones, chair, viewer, and in this the impact of the piece as public art is lost. Yes these are videos of a moment in time, a ‘one time performance’ but this is what remains, therefore the viewing of these videos could have been presented in a more centralised, shared atmosphere.

The aim of touch sanitation was to break down social boundaries and to empower people in the act of change, appreciating those who worked for New York city, doing the jobs people prefer to ignore and leave to others. Although it seems the resulting empowerment lies within Ukeles and her career. What did shaking hands with this woman mean to the workers of the Department of Sanitation? When looking back upon the project she writes:

“I meet a sanitation worker. I see deep in his eyes what I have come to call the Gates of Acceptance. I see him looking at me, and then I see his gates opening up….We are exploding the old upstairs-downstairs cultural frame together.” (Feb 2007)

She saw meeting new people as a scary, dangerous prospect, as though these people are a different species, staring at her, but then everything turns out okay. She is fine and well treated. Sanitation workers are people too, who would have thought. Its seems that Ukeles entered the project with stereotypical views, placing herself as the ‘upstairs’ to their ‘downstairs’ it begs the question who was this really for?