Mixing It Up- Painting Today - a-n The Artists Information Company 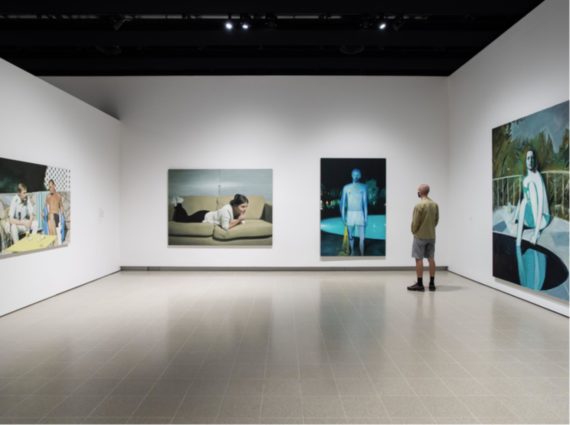 Painting has come home again and is being hailed once more as an important contemporary art form- as if it had gone somewhere!? Since the YBAs of the 90s, with their contemporary brand of cool, conceptually accessible sensationalism, had all but wiped out what might be termed ‘Neo-Expressionist’ painting of the previous decade, the validity of painting has been in question. Charles Saatchi certainly picked up on this and his 2005 exhibition ‘The Triumph of Painting’, aimed to reboot this traditionally categorised art form by challenging such preconceptions. It proved to be an influential decision as since then, prestigious venues around the world have had exhibitions focused on painting. They usually spring up every few years or so, proclaiming painting’s inherent vitality and importance within what is regarded as contemporary art today. ‘Mixing It Up: Painting Today’ at The Hayward Gallery, London is no exception.

Indeed, in Ralph Rugloff’s Introduction to the exhibition, he goes on at great length to present a case for painting’s relevance today. All the arguments you’d expect are there: painting’s (dis)connection with its past; comparisons to 20th century sculpture with its evolution through installation work and eventually to performance art; painting as alternative to the ‘disposable, swipe-able, one liner images that inundate our lives’; discussions on painting’s materiality, immediacy, heterogeneousness etc. However, in just using these categories, Rugloff’s arguments for painting’s relevance today, though extensive, is flimsy.  Surely it’s the idea(s) behind the construction of a painting which indicates significance? What binds together the 31 British-working artists in this show is not anything conceptual (as is our expectation for contemporary art), but medium itself- the medium of paint. For all the talk about and around ‘painting’ as a theme which unifies these artists, Rugloff then backdrops all this with grand global issues to do with race, gender, private/public, high/low culture.  He even includes a quote by the often contentious  philosopher Slavoj Źiźek- used out of context! It all feels a bit desperate.

But what of the work? As with any group show, there is diversity of theme and style. The exhibition contained a refreshing selection of skilful visual artists- all of different ages and backgrounds. As a painter myself, I could not help but be interested in the wide range of techniques on display. Painting with stains, impasto, washes, trompe l’oeil, photo-realism, miniatures, murals, alternative substrates/materials, figurative/abstraction, gestural/mechanical applications.  All your favourites are there which gives the exhibition enormous variety and visual interest. In many ways this was the real delight and that which is honestly reflected in the exhibition’s title. I spent over two hours absorbing the paintings. The experience felt fresh and new in many ways but was also familiar terrain.  Visiting a gallery of visual work hung on walls is an experience common to most. There is an egalitarianism about viewing paintings which allows people to engage easily with art, as aesthetics are often an entry point. Some highlights from the exhibition for me were:

Ominous canvases acting as portraits which are defined by their very lack of human presence.  Sami’s post-war Iraq interiors and landscapes vibrate with menace and a narrative stillness. Skilfully gestural passages of oil paint combined with black spray paint, washes and scumbling make for satisfying contrasts between hard and soft edges. Most interesting pieces for me were ‘Infection II’ and ‘Family Issues II’ both of which use shadows of furniture and house plants to achieve a lurking eeriness within the room which you are enclosed. The viewer changes from spectator to participant- simple, clever and powerful.

Two photo-realist paintings: Patio and Couch. Impressive in their technical execution, especially the thick palette knife modelling and scraping contrasting with soft blended brushstrokes in Patio. Something of the Photoshop in the altered brightness and colour here. Couch is nothing new in the photorealist style and has all the lush softness of Richter’s work. Though admirable in execution, more interesting of Wateridge’s paintings for me were the two large poolside portraits ‘Night Swimmer’ and ‘Figure by Pool’. Within their dreamy, emerald-green tones, they presented a unique hybrid of representational painting- something between photography and a Matisse painting. The space is unsettling and hovers somewhere between 2 and 3 dimensions.

Some of the most interesting work in this exhibition for me.  Zhang uses stencils and photoshop to produce paintings which tap into that well-trodden tradition in painting from Pointillism to Warhol: the artist operating as a machine. Zhang’s paintings seem to contain pattern and replication of form however the rhythms are flawed. Drips, smudges and tonal areas which seem spontaneous are each repeated by hand giving each repeated form a uniqueness that highlights the human/machine relationship.  It’s as if a computer programme algorithm meant for outputting to a printer has been sent to a hand of flesh with paintbrush. This is ambitious painting. Cyborgs and post-human associations plant this work firmly in the realm of the contemporary.

Using the scale and frenzy of mid-century Abstract Expressionism, Murillo’s paintings project a type of cancellation or erasure energy. There seems to be a scene behind all the chaos like some secret which has been desperately censored.  Black is the dominant colour here entwined with white and red.  The three colours are powerful, they unite to suggest meat, blood, love and also have difficult associations with political propaganda from the 20th century. The inclusion of scrawled cerulean blue however is a real contrast and it separates itself from the black/white/red.  The blue offers some kind of hope.  It is a new sound in an otherwise symphony of aggression.

Kudzanai-Violet Hwami’s paintings are authoritative, masterfully combining elements of abstraction with buttery figuration.  Gareth Cadwallader produces fascinating, tiny, meticulous paintings- like a Richard Dadd fantasy set in a photo-realist modern world. Issy Wood’s collaged images of found objects which she paints on velvet produce a lush and dreamlike aesthetic. The exhibition was diverse and the majority of painters offered something different from each other. In this sense it was truly a ‘mixed up’ show. However, though it might have represented some painting today, I did not leave feeling it represented the future of painting.  It was just a nice slice of what’s going on.

‘Mixing It Up- Painting Today’ is a strong exhibition of some interesting artists working in Britain today.  The layout of the exhibition was very particular, forcing you to view the work by winding this way and that.  Very much like being at an Art Fair.  Unfortunately, this did give a flavour of the commercial to what really should be an institution dedicated to exposing art and ideas to the public. A price tag and red stickers would not have been out of place. I could not help but reflect on how/why the artists had been chosen.  I began to note the commercial gallery associated with each artist and wondered about the art market’s fickle and speculative nature. Thoughts of art as capital enter the conversation. Just what was each gallery’s association with The Hayward?  Trying to put these thoughts to the back of my mind, I focus on the show being stronger if the hang had contrasted with the Art Fair mould. Whatever these ponderings might reveal, commercial or not, this exhibition was always going to be a success.  Such a show of contemporary painting at a gallery with the status of The Hayward will always garner approving nods from the thousands of art enthusiasts out there who secretly (or not) will never be as embracing of contemporary art’s less traditional forms of expression. Vive la painting!