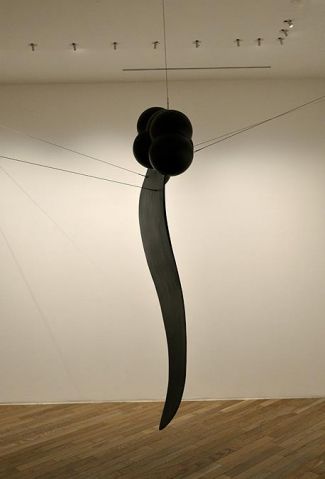 The current exhibition at the Hara Museum of Contemporary Art is a double-barrelled affair that combines the work of two of Portugal’s most renowned artists; Pedro Costa and Rui Chafes. Chafes’ works are three-dimensional metal constructions, exclusively in grey or black. Some are in the form of absurd fixtures one might find in prisons to separate visitors from inmates, while others are abstract and more organic. These hang in the air suspended by thin wires, or project from the walls, and their matt black coating against the white of the gallery sometimes suggest giant unknown punctuation marks or scientific models of viruses.

Pedro Costa’s work has, since his film 1989 film ‘Blood’, been something of a bulwark against the easy heroic narrative template of Hollywood films. His contribution to the Hara Museum exhibition are excerpts from his films ‘In Vanda’s Room’ and ‘Colossal Youth’, as well as what could be described as monumental video portraits; looped film footage of subjects barely moving, projected vertically rather than in landscape format.

On one level the combination of two such different bodies of work does not bode well for a coherent exhibition; the architectonic nature of Chafes’ pieces intimate a modernist’s hope in the redeeming possibilities of art, whereas the deliberate obfuscation of the boundaries between ‘art’, ‘film’ and ‘reportage’ in Costa’s work seem to undermine this.

The exhibition therefore requires the viewer to do the work, not only of appreciating or interpreting pieces, but of considering relationships. A group show of several artists, which, in the big museums in Japan are often gathered together under a broadly encompassing theme, would have its own, if perhaps related, problems. In ‘Mu’ the partnering of two artists of quite different practices showing together leaves more room for an audience to ponder how pieces, and ways of perceiving the world, relate to each other.

This is more poignant when considering Costa’s video pieces, which feature people at the bottom end of society. They are seen shooting up, smoking, coughing, cooking on open fires in the street. The static camera records long stretches of very mundane activity in claustrophobic spaces, where the lack of drama only seems to heighten the pathos and misery of the scenes. Often the relationships depicted are those of need or dependence; a dealer and an addict, a mother and her disabled child.

The relationship between Costa and Chafes is described in the press release as one of friendship, not collaborators, and as the two artists have successful careers independent of each other, they do not need to exhibit together. That they do, despite the disparities in form and media, and the tendency towards the desolate in their work, is an eloquent statement in itself.

John L Tran is a British artist and writer of Vietnamese descent, currently based in Tsukuba, Japan.Â