My Body My Self: Art from the Body - a-n The Artists Information Company 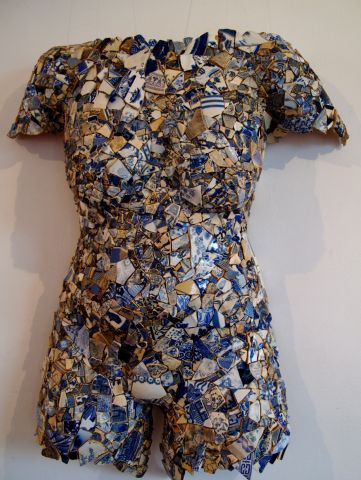 Caroline Born’s new exhibition in Kingsbridge brings together recent work and pieces that go back some decades. The earlier pieces have been chosen to contextualise or complement the recent series based on body casts. The exhibition is distributed across three spaces at Harbour House, with the rear space having works on paper and canvas, the central area having smaller works and including a selection of works by other artists, and the front space with large windows onto the Promenade showing the series of body casts.

The body casts draw on different crafts, processes, materials and narratives to tell aspects of a life story or stories. Family history, gender relations, personal history, and the changing physical body are put into play. Born’s cast torso is covered and reconstructed in a variety of forms including a mosaic of found blue and white china in ‘Re-gather’; an assemblage of bleached driftwood; a layering and framing of monogrammed napkins in ‘Cloth of Generations’; a collage of coloured papers; a patchwork of sanitary towels; and a mound of living turf. Each of these references or derives from a craft tradition, or an art technique, and uses this to tell a part of the history of her body.

Traditional and popular crafts are reworked in these contemporary sculptures as lacemaking, pottery mosaic, papier mache, patchwork, and embroidery are used by Born to shift the awareness of the audience. The viewer is asked to recognise the history and skill involved in making the work, and to notice that the form or the material is not traditional, not conventional. Thus each process operates on a number of levels, for example, the blue and white china mosaic may recall rural crafts where such mosaics covered large jars or pots to form vases or lamp bases. The material also refers directly to Born’s family home in Salcombe and the activity of her and other children gathering these fragments from the beach. The fact that so many were found there links to the wider history of the twentieth century as the pottery may have come from the debris of houses bombed in the Plymouth Blitz when the rubble was reused as ballast to resist marine erosion.

The inclusion of crafts associated with the domestic sphere and with women, in particular textile crafts, situates Born’s work within a history of women’s work and of women’s bodies. Detailed and painstaking activities confined women, restricted them, while at the same time promising some liberation. Skill in needlework might be admired, but it was a slow and tedious way to earn a living, and long hours manipulating bobbins kept a woman busy and at home while allowing her to earn pin money. Born’s sculptures acknowledge this, but also suggest an alternative narrative of community and communication among craftswomen. This is represented in the upright and open stance of the body forms, and elevation or revelation of the materials used. (It is also underlined by Born’s crediting of her craft teachers, and her inclusion in the show of pieces by three other Devon-based women artists.)

The body described in this exhibition is a woman’s body, a woman of 57, a body marked with decades of history. It is a body which bled monthly for years, and has stopped bleeding. It is also a body connected to past and future, to other makers, and to family. The works presented here tell elements of this body’s tale, gathering its tokens, and translating them through slow procedures into emblems. These emblems convey strength and persistence, and a living on of this body into a future of telling and sharing.