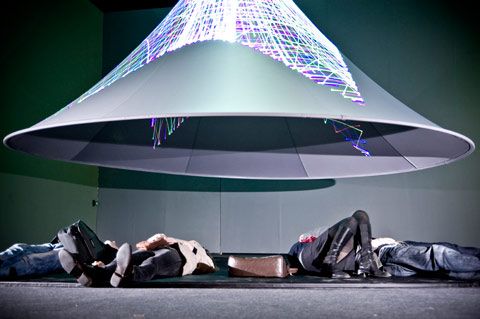 On the opening day of Nam June Paik at FACT Programmes Director Laura Sillars made an optimistic comparison between the Paik retrospective (the first since his death in 2006) and the 1907 posthumous Cezanne retrospective which inspired a surge of avant-garde output from a young generation of artists including Picasso and Braque. The hope for a young generation to show visible influence from Paik is perhaps a little over-ambitious but leads to the question of what Paik’s practice can offer a younger generation of artists today.

The retrospective begins at Tate Liverpool, where a comprehensive selection of early experiments and scrappy D.I.Y. electronics is displayed. Many of these once participatory works are disappointingly rendered inoperative by the necessary museum display. The exhibition covers 5 decades of works that often found resonance with the aesthetics of the time, resulting in an exhibition that does not shy away from the more embarrassingly outdated works of Paik’s repertoire. But Paik’s use of pop aesthetics, and occasionally brash delivery serves an important purpose; Beginning his career within the confines of the avant-garde Fluxus group Paik developed outward towards a more widely accesible practice. Paik’s desire to popularise avant-garde themes forms the cornerstone of his working method.

Although not lacking in humour and irony there is a sincerity to Paik which is manifest most earnestly in the relationships with Paik’s collaborators. Musical performances with Joseph Beuys show a genuine affection and mutual respect, ‘In Memoriam George Maciunas’ is a particularly touching example. It is a credit to Paik that he maintains inter-disciplinary collaborations throughout his career such as regular contributions from John Cage in many of Paik’s video works. If a young generation were to take influence from Paik, I would hope that they would aspire to Paik’s contribution to artistic community and acknowledgement of its significance.

One of Paik’s most recent collaborations is also one of the most enjoyable. Laser Cone made in collaboration with Norman Ballard just 5 years before Paik’s death continues his unrelenting drive to push the boundaries of technology forward. Laser Cone is a colossal funnel shaped sculpture suspended in the centre of the gallery space at FACT. A ring of lasers meet just above the funnel, projecting an array of twisting patterns navigating down the funnel. Participants lie beneath Laser Cone sharing a collective transfixion reminiscent of youthful stargazing.

The work at FACT is displayed much more sympathetically to Paik’s engagement with his audience. A series of monitors displaying Paik’s satellite T.V. experiments is presented in quasi-domestic environments allowing viewers to casually browse Paik’s T.V. works with the available remote controls. Cage, Moorman, and Duchamp merge with 1980’s neon pop music videos in various attempts to expand the New York avant-garde into wider contexts. Paik had a daring approach to producing work, he rarely held back, brazenly following through on each concept. This results in some offputtingly blunt works, most notably a series of anthropomorphised monitors stacked in the shapes of various characters, but looking beyond this there are compelling works which hold their own not just as technically pioneering but as lasting artworks. The display of artistic community and inter-disciplinary collaboration is well documented and hopefully resonates with working methods shared by a younger generation of artists today.