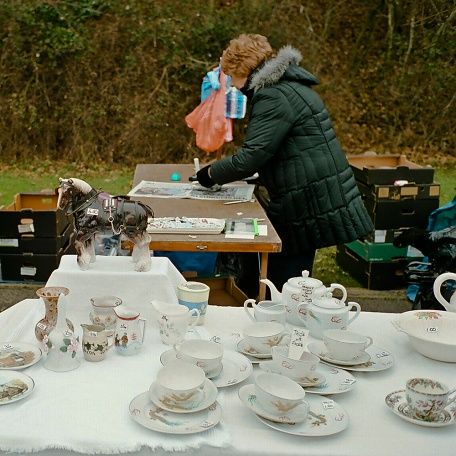 A rarely held group exhibition is currently on at MK Gallery and even when displaying the work of eight artists, it retains its trademark curatorial starkness. I can already hear readers of the local newspapers complaining the gallery is still too elitist, even though the aim of this particular exhibition is purposely to demonstrate the range of artistic talent in Milton Keynes. Even so, the exhibition firmly resists becoming too populist and the casual viewer may still struggle to connect with much of the work on display.

The eight artists featured are all drawn from finalists for the 2010 MK Community Foundation Arts Bursary Award (“CFABA”), which is designed to give an emerging artist the chance to further develop their skills and/or give them the financial freedom to concentrate on a new body of work. Caroline Devine was the overall winner. Whilst this is absolutely a valid group to select from, I am sure there are other contemporary artists in the region who are equally talented and committed but who have missed the opportunity of having their work shown in MK Gallery because they did not apply for this particular Award. Perhaps there is still an argument for the gallery to hold at least one annual open exhibition. The high standards of the gallery would still be maintained by virtue of its final selection (as it has been from their final selection from the CFABA candidates).

Having said all that, I am very pleased to see this exhibition here and first out of the starter’s block upon entering was Jamie Chalmers’ Spam Stitch series – small hoops of embroidery hung throughout the gallery. Titles from spam emails usually immediately deleted and forgotten replace usual “Home Sweet Home”-type mottos with amusing effect.

The Cube Gallery was taken up with Caroline Devine’s sound installation Recording Contract Recordings (vertical slice). In her artist statement Devine says she is concerned with the spaces within and around sounds and that her installations explore the spatial aspects of sound through the use of multi-channel speaker arrangements. The disembowelled stereo speaker components suspended from the ceiling and unsettling, indecipherable sounds between random legal jargon-filled sentences being emitted from ground level speakers featured here, create a haunting and perplexing installation.

Photography was the focus in the Middle Gallery. Frazer Waller’s Carbooting series and Stuart Southwell’s Grotesque Identities squared up against each other like boxers in opposing corners. Waller’s portraits of enthusiasts from all walks of life – those selling off a variety unwanted and unloved paraphernalia and those snapping up the same items, now transformed into bargains and must-haves, easily out classed Southwell’s more laboured musings on identity and Western cultures.

Unfortunately Jason Smith’s video of photographic stills from a 2008 performance piece and his Excavation series drawings positioned between the Middle and Long Gallery, were somewhat obscured on the day of my visit by activities taking place around the children’s art trolley and blocking access along the main corridor. This discourage anything more than a brief pause around that area.

Throughout the exhibition, information about the artists was limited to edited versions of their statements on the reverse of the exhibition guide. While further investigation on the gallery’s website revealed more detailed summaries, it would have been interesting to know a little more about them while visiting the exhibition itself.

Overall though, it was Emma Wilde’s little drawings and Lauren Keeley’s oil on canvas board paintings, which spoke to me the most. Confidence and authority quietly resonate throughout their work.

Less successful for me was the photography of Stuart Southwell and Kamil Szkopik. Tackling similar subjects of the conventions of identity within society (and although both are very technically accomplished) the visual outcome of their explorations and over-constructed statements failed to engage or impress. Szkopik in particular points out that none of the models in his photographs are airbrushed using computer software, but all of them are beautiful and youthful and his compositions are highly theatrical and staged. They are also softly focused and have filters applied, subtly manipulating the images, which is why I do not really understand the intent behind his work in relation to the rhetoric used in his artist statement.

On 18 August MK Gallery is holding an ‘in conversation’ event as part of its related events connected to this exhibition, where the artists involved will talk about their practices and the cultural climate in Milton Keynes. This is a date I have in my diary to attend and so may well change my opinions on some of the featured artists once I have heard them speak more in depth about their work. Knowledge is power for an fledging art critic…