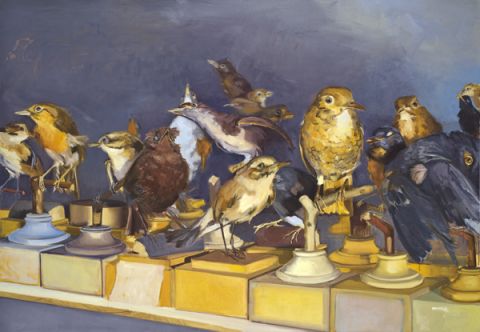 Berlin artist Nikola Irmer’s Promethean Boldness introduces to the British audience a series of striking and confrontational paintings and drawings from the last three years. The arresting subject is the largely forgotten collection of prepared specimens of birds in the Natural History Museum in Berlin. The virile quest for new species and new ways of classification meant that in the 19th century great numbers of indigenous animals and birds were hunted, killed and shipped back to Europe. Thousands of specimens stored since in the museum have apparently been hidden from public view for years.

Irmer came upon these colourful but increasingly decrepit birds, languishing in their cabinets, at a behind-the-scenes event at the museum. Despite it meaning the abandonment of ongoing projects, as well as a reappraisal and adaptation of her working methods, she felt compelled to devote herself to drawing and painting these forlorn but dignified subjects. ‘These are all specimens, individualized. Taxidermists try to make them as lifelike as possible, to be convincing, which still comes across. They are quite expressive and in the drawing and painting I project expression into them as well. But scientifically they are just considered to be representative of the species for scientific purposes. You’ll have hundreds of birds of prey of one genus from all over world, now they’re not used anymore so they all get shoved into this narrow space.’1

The many hours she has since spent observing and drawing the birds affirmed for her that there is still a residue of what was once there, and that is why she wanted to paint that spark as she sees it. It is unashamed projection and acts as fuel for work that whilst critical of the very existence of these discarded objects, the legacy of an over-reaching ambition by man to think that he could control and understand nature by collecting it, also aspires to transcend this shameful history and create works of wonder.

The titles of the paintings are taken from the extensive reading she has done around the subject. Some use the scientific jargon surrounding the collections and may be viewed as counterpoint to the paintings, ‘representing the world of control through language, a laconic reflection on how they are being talked about’. It is her intention though that the paintings give us an alternative way of seeing them. ‘I totally believe in painting and drawing, it’s so alive to me’.

It is in her belief in the power of painting as a medium of transformation, her agreement with Michelangelo that a painter ‘paints with his brains and not with his hands’, that Nikola Irmer shapes her ambition for the works in Promethean Boldness.

Through her newly learned patience, her care in ‘the decisions with many dimensions’ 2 she makes in her painting, she makes works that palimpsest time and meaning and so gain substance enough to start to grapple with the bizarre status of these objects.

She aims to be true to nature in her sympathetic depictions of the birds and in so doing shares with us her admiration at the taxidermists’ art of achieving life-like effect in their meticulous preparation of the specimens. They are at best now dusty or moth eaten, at worst disintegrated, limbs separated, heads toppled. Some are so damaged that it is hard to distinguish one from another and it is her intention and our privilege to watch her offer up stunning equivalents in pigment to the decay. In so doing she hopes to project new feeling, hers and ours, propose new narratives, re-invent psychological dramas and so give a new life to these discarded birds. ‘In a way that’s what really still shines through, that be they as moth eaten as they are, there is still enough of that revivification going on that can communicate itself to the viewer.’

As much as any of the paintings in the series, L’attitude de repos illustrates Irmer’s passion for her craft, her painterly skill and intentions. She employs the paint as well as the composition in order to direct us how to view the work. It is what painters do. Rembrandt and Velazquez used the whole range of oil paint from the thickest impasto to the thinnest glazes. Chardin’s careful, delicate application of paint in Still Life with Dead Pheasant and Hunting Bag 1760 heightens the element of empathy with the subject. The sheer physicality of oil paint, the surface texture, can give a painting great presence and a stronger sense of reality than perhaps the smooth surface of photograph or reproduction.

The upper third of the picture is a sensuous eddy of colour, of addition and erasure, the birds below it emerging out of the welter of brush marks. Signature strokes of paint are in flight, as the birds beneath can never again be. The process of painting is one of discovery for Irmer and for us too. There is within such virtuosity surely an invitation to draw closer or we may miss something. ‘As long as the viewer is really looking, that’s all the painting needs to achieve’.

When really looking at L’attitude de repos we must drag our eyes upward and away from those that would catch them, and find the clearing within which we may momentarily rest and consider the meaning of such display. In its deliberate sketchiness it encourages us to open our minds and allow new responses to move us, as clearly it has the artist. We may view the picture as an image of the artist’s feelings as well as an accurate observation.

Writing of the game still lives Dead Pheasant 1842 by William Etty and Cock’s Head 1951 by Lucian Freud, Julian Spalding proposes that ‘An image of “reality” must incorporate in it not only the object’s appearance but also our response to it.’ 3 Each of us will respond as we must and offered here is just a version, to be welcomed or discarded, but at the very least intended to be a prompt to the opening of our mind’s eye to the transforming properties of painting and to the aspect of time embodied within it. Irmer wishes us to experience ‘a quietude and a concentration to the work’. She knows the value of both, has lived them in the days and weeks spent in scrutiny, propped on make-shift wooden crutch in detailed drawing of her subjects.

‘A formal consideration of this subject was that I wanted to de-accelerate, slow my work down a lot in terms of both the working process and the viewing experience. I wanted to put so much work, so much labour into the painting that the viewer could stand in front of it, hopefully for a long time and see more and more. I wanted to slow the vision down, my vision and the viewer’s vision. I thought about what is so unique about painting. I think it is its slowness, the longer I look at a good painting or a drawing the better it gets and any time you come back it’ll be different, there’ll still be things to see. In my experience that’s different to photography or film or any other media.’

If we can slow our vision, we will perhaps get close to the improbability of sharing the excitement of the moments when those brush strokes soared. It is hard not to feel caught up in the passion for both subject and material that is evidenced here, to feel our arm twitch to mimic the arc of the painter’s as proportions of woman left their mark, to relish the pleasure of the flicked brush at the end of that arc, alla prima painting as fresh as in a brilliant oil sketch by Constable. Red under-painting is laid out bold on the surface, its ghostly bird outline a possible emblem for the thousands who are there still in the dark, unseen and forever unseeing but staring in disbelief. Inevitably within all this, personality is imposed by the painter, the tilt of a thrush’s head exaggerated, the twinkle in the eye captivating us. She has been moved and experienced latent empathy with these birds and wants us to feel it too.

David Hockney, a painter Irmer admires for his enquiry into the substance and value of painting, said ‘One thing all this does for me is to make me believe painting is far more important than even I thought, for if the photograph is attacked for not being what it almost claimed to be, it makes the hand very important again in depiction and recording. There is a moral purpose.’4

Blurred, seemingly not quite focused, an inverted peripheral vision of a quartet of birds is piled in the centre of the canvas in L’attitude de repos, dry wiped drag marks through them suggesting motion. Not easy to sum up, they are trying to tell us something. They may be late arrivals, the vanguard of all the rest that might also be here. They may just as well be departing, left suspended in the moment of removal, the tally reduced and so perhaps the guilt.

The wept clean sockets have bided their time for this moment, could not have been more patient in their charnel cases, the bleached head count, so long it cannot now be counted. These bony transmitters signal to us now that we must pause, take stock, question the cult of the cull and ask whether the journey from science to art justified their incarceration. For the artist it was a chance find, the bag at the end of a days speculative hunt. It’s what artists do, trawl alert and watchful, until if lucky a hunch is vindicated. And now at rest, reaching no absolute but closer, it is in the eye of the beholder, hers and ours that the salvaging occurs.

In the luminous works of Nikola Irmer the painter’s art is revealed as alive and burning as the beacon of enquiry it can be. The reprise is in the humanity of these paintings and the pinning of us by those unseeing eyes is the gift. The Byzantines knew of it, daVinci too and we can be reverent before it as they once were. It is the reward for the time spent, the love given, reflected homage.

1. The comments by Nikola Irmer are from an interview by Clare Carswell with the artist in her Berlin studio, 19th August 2011, and from subsequent email correspondence.

2. In his essay Making Decisions – or : the Underpainting Plays a Role for the catalogue Nikola Irmer/Personals K4 Galerie Saarbrücken 2005, Robert Felfe goes on to say

‘The technical brilliance that is performed here is used rarely and for a particular purpose. It creates within an image local “focusings”. Unlike in photography, these are defined according to the subject, and are denser and more complex than other passages. These compressions can create, even in small format a dramatic effect.’

3. In his essay Image, for Three Little Books on Painting Arts Council of Great Britain 1984, Julian Spalding continues ‘Paint is not a reflective glass and nothing can be translated into it without being radically altered. This transforming potential is the source of all expression of feeling and of imaginative power in painting.’

Clare Carswell is a performance artist, curator and writer, working from her studio near to Oxford, UK. www.clarecarswellperformance.com She is Curator at COUCOU Arts, www.coucoucuration.com where she runs the DWELL residency programme for women artists over fifty and the Art Pitch residency programme.