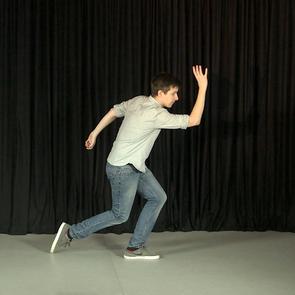 The film Let’s Go Bowling makes a refreshing contribution to the growing body archival art, defined as a genre by the contemporary art historian Hal Foster in his 2004 article An Archival Impulse. Foster identifies archival artists as those who “seek to make historical information, often lost or displaced, physically present. And to this end they elaborate on the found image, object, and text.” (1) In recent years, the democratising effect of the widespread digitisation of archives has enabled Paige, among others, to freely appropriate and reimagine the materials held in these collections. As Foster noted, the internet constitutes a “mega-archive.” (2) Rick Prelinger’s collection of thousands of public domain films, has been available online as an open access digital archive for anyone to freely download, reuse, borrow, copy and adapt since 2000 – and we are actively encouraged to do so. (3)

Paige appropriates his source material with a cool eye, drawing on the mid-20th century instructional bowling films of the United States to explore his Anglo-American identity and create an auto-ethnographic work. As the archivist and researcher Sue Breakwell states, “Archives are traces to which we respond; they are a reflection of ourselves, and our response to them says more about us than the archive itself.” (4) Prelinger Archives allows Paige to excavate historical material in the form of the instructional films remembered from his militarised childhood on a US Marines base – as a boy between the ages of six to ten years old, he learned bowling along with other healthy sporting activities during the annual Summer Schools.

Let’s Go Bowling foregrounds the presence of history through Paige’s strategy of bringing the past into the present and staging a filmed re-enactment of the demonstration of the correct performance of bowling. The original cultural context and instructional purposes have been stripped away. What remains are the repeated mimetic gestures of his performers as they attempt to master a set of behavioural rules.

Cinematic representational modes of the 1950s instructional films promote cleanliness, neatness, and healthy team-based exercise as a preferred leisure pursuit. As such, these post-second world war instructional films from the United States provide a blueprint for all-American respectability, in accordance with the dominant ideological system of patriarchy, and conducted according to specific rules and customs, clothing and behavioural scripts.

For Paige, bowling functions as a metaphor. The artist questions and rewrites the instructions, re-imagining bowling as an oppositional act, a critique of the inherently unstable binaries of normative masculinity and femininity. He sets his video camera on a tripod in the dance rehearsal studio, using a fixed wideangle view to frame the movements of the performers’ bodies against the backdrop of a plain, dark curtain. They re-enact the choreographed movements learned from watching instructional bowling films from the 1950s, provided by the artist via Prelinger Archives. Paige’s camera documents their actions. The performers embody resistance as they practise the moves of heteronormative patriarchal codes. (5) Their repetitions do not produce an improvement of technique, an increased strike rate, the approval of their peers; they do not compete. They operate within the parameters Paige has designed and constructed to queer the pitch of heteronormativity. Let’s Go Bowling is an act of cultural resistance against an oppressive regime that subjugates and erases difference from the norms of the public sphere.

The title invites us to participate in the group activity of bowling, a competitive leisure pursuit sited in a purpose-built arena, where our ability to deliver a skilled and controlled performance is on show, to be judged by our peers. Yet these performers have no agency and may only act within the confines of the scenario determined by Paige, and according to his directorial instructions. And something else is missing from the mise-en-scène – the focus of the performers’ attention is absent, there is no ball for their fingers to grip. The rhythms and choreographed social interaction of gameplay and the tournament have been silenced. We cannot hear the rumble of the heavy balls as they roll down the lanes, the strike as the ball smashes into the pins, or the clattering noise as the pins’ tumble and scatter.

In this work, as in the source material, priority is given to fixing the performance as a recording rather than its ‘liveness’. As an audience, we can’t intervene, as we could in a live performance, and bring back the lost ball into play – it is not there, the heavy weight of patriarchy has been elided. In Let’s Go Bowling the artist’s voice supplants the authority of the original material and manifests a conceptual space on screen in which we can contemplate the displaced performance of heteronormative behaviour in relation to our own auto-ethnography. Deploying subtle strategies of re-enactment and staging, Paige challenges and undermines patriarchal codes by not playing ball.

Notes
1. Hal Foster (2004) ‘An archival impulse’ OCTOBER 110 (Fall 2004) p. 4.
2. Ibid.
3. The website states: “Rick Prelinger and The Internet Archive hereby offer public domain films from Prelinger Archives to all for free downloading and reuse.
You are warmly encouraged to download, use and reproduce these films in whole or in part, in any medium or market throughout the world. You are also warmly encouraged to share, exchange, redistribute, transfer and copy these films, and especially encouraged to do so for free.” See the Rights statement at: https://archive.org/details/prelinger&tab=about
4. Sue Breakwell (2008) ‘Perspectives: Negotiating the Archive’ Tate Papers (no. 9, Spring 2008). p. 6.
5. Heteronormativity considers sexuality and gender to be fixed ‘natural’ categories organised as hierarchical binaries, with ‘man’ as the (superior) opposite of ‘woman’, and heterosexual as the (superior) opposite of homosexual. The heteronormative paradigm promotes heterosexuality – the binary norms of ‘masculinity’ and ‘femininity’ – as the only behaviour seen as acceptable, and reinforces the patriarchal structure of society through its prescriptive set of norms. Bisexual, intersex and transgender categories of identity challenge, or ‘queer’, heteronormativity because they demonstrate that gender and sexuality are fluid states that are able to flourish between the fixed orthodoxies.

Gallery in the Cinema
An initiative of Plymouth Arts Centre with the Moving Image Arts (MIA) research group at Plymouth University, it presents a regular programme of artists’ moving image exhibition in the Centre’s cinema, which is accompanied by a commissioned strand of written essays, in order to create a critical landscape for understanding contemporary artists’ moving image practice.

Artist film-maker creating innovative, experimental moving image works for cinema, gallery and broadcast television, and a range of commissions. The recipient of many awards, her work is shown worldwide across public, gallery and online spaces. Recent screenings include Plymouth Arts Centre (solo exhibition); Close-Up Cinema, London; Aurora Picture Show with the Menil Collection, Houston; and with One Minute at This Way Up, Hull, and VisualcontainerTV, Milan. In her practice she uses animation, photography, sound, performance, found objects, drawing, and writing, working with film-based and digital technologies to explore the interrelationship between the body and forgotten, liminal spaces. She received the 2016 Plymouth-Nicosia Artist Residency Award hosted by Nicosia Municipal Arts Centre (NiMAC), Republic of Cyprus, for Father-land, a collaborative film project with Stuart Moore, which will be exhibited at NiMAC in 2018.