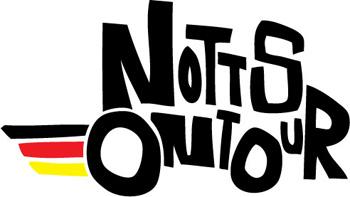 Designed, by Ellie Harrison, for ‘curators, artists and general artfolk’ from Nottingham and the surrounding areas, ‘Notts on Tour’ set off for a good ol’ bonding session over a shared interest in art. A range of ages, newly graduated beginners in the artworld, to those experienced artists.

With a very early start at 5am, bleary eyed travellers made their way onto the coach and straight away eyes were shut and snoring commenced. What a great way to start networking?! But as the sun rose, the ferry was boarded and the sea air attempted to blow the sleep away, here began our 12 hour journey across France, Belgium and Germany, finally reaching Munster in the late evening.

The trip was a success, despite the dreary weather and early mornings. No fatal accidents on our 3 hour bike tour of Skulptur Projekte 07, old and new works seen and experienced in the open air. Munster looked to question ‘what is the public?’ and to explore concepts of space. This resulted in art placed within the public realm that was purely there and not connected to a museum or gallery. This year 2007 less artists were invited, less traditional sculpture was produced, and the notions of developing, changing, privatisation and society were the main threads that flittered through the Projekte. Environmental changes alongside comments on the history of Munster developing into what the tour guide could only describe as production of playful works. Work from artists such as Isa Genzen developed harsh reactions from the Munster locals resulting in the public adding to the works and then others damaging the work quite violently.

Documenta 12 at Kassel. Awakening from our rain splattered marquees, the event provided a feast of varied works throughout the four indoor exhibitions and the dispersed outdoor pieces. Although the main curatorial choices we based on aesthetics, the themes that featured were incredibly hard hitting, varying from increasing AIDS deaths, to religious conflict, to problems with immigration, all types of war; Nazi violence to present day violence. There was a lot to take in, to absorb and find understanding, and to be almost bombarded continually with such issues was exhausting and almost too much to handle.

All this resulted on occasional trips back to the marquees for an afternoon nap, followed by a jaunt to a pub for a litre tankard of Brinkhoff or to the local Mexican bar for Enchilada hour and half price cocktails, to mull over the events and artworks of the day!

Friends found; acquaintances made; a lot of travelling; Art seen, experienced and explored, some liked, hated and others that created a distinct feeling of indifference that was definitely worth the dosh, the exhaustion and the over-eating on the coach!

Artist and freelance writer working in the West Midlands. www.alexandriaclark.com