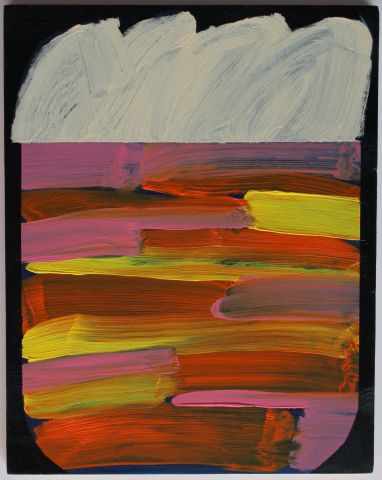 Predominantly small abstract paintings feature in the exhibition ‘Objects of Desire’ which opened this week at Centrespace gallery in Bristol, curated by Ruth Piper’s Searchers Contemporary. A trio of works by Melanie Russell, Midge Naylor and Brendan Lancaster stand out in their central position on the right hand wall, conveying both the collectable and ‘object’ aspects of exhibiting that this exhibition aims to promote. All three works display rich use of paint through strong visual markmaking and compositions evoking a grand scale.

Another particularly memorable set of works in the show are a grouping of nine by Michael Hayter to the left as you enter. Dark visionary characters inhabit these shadowy submerged colourscapes. Glazings of thin oil colour create misty psychic spaces within which the different characters appear to commune with each other. Each painting expresses a different stop on a broad scale of sentiments evident in Hayter’s work ranging from darkly sinister to darkly humorous. Small works by Robert Lang elsewhere in the show seem to have absorbed the dark psyche of Hayter’s paintings and reflect back a more rational afterimage as if seen on the inside of your eyelids.

Further painterly pathos is present in Maggie Royle’s large painting ‘Be My Homeward Dove’. Royle’s smaller work displayed opposite, demonstrates her process of painterly response to emotionally charged historical portraits, an intriguing additional layer to her seemingly abstract work. Where Royle uses imagery as a basis from which to spring forth into painterly expression, Anne Adamson’s method seems more to suffocate the imagery with her stilted brushwork and awkward scale.

A contrast between dedicative practices can be explored through Alexander Korzer-Robinson’s intricate sculptures from paper with Jess Woodrow’s heavily built up paintings which utilise both surface texture and physically visible relief to convey a feeling of dense space. Battled out in the studio through hours of looking and decision-making, Woodrow’s paintings display processes of both adding and removing paint. She layers on the paint so thick and clotted the whole canvas becomes encased, and then more tentatively scumbles and scrapes back in the final stages to resolve the surfaces. In contrast there is a Victorian sensibility at play in Korzer-Robinson’s laborious craft which complements the old-fashioned naive illustrations which he reveals layer by layer in his book sculptures. A subtle humour in his juxtapositions of imagery combined with the richness and visual fluidity of the resulting tableaus sits well within a show that mainly displays works of sophisticated painterly complexity.

A more introverted abstraction is evident in Stephen Buckeridge’s paintings, where skins of paint are excavated back to reveal weathered markers below their surfaces – but his pastel palette restricts the range of associations which could potentially be made, in contrast to Brendan Lancaster’s more fluid landscape-referencing paintings, and Midge Naylor’s more direct approach combining markmaking and composition into a single process. Multiple readings are also to be found in Melanie Russell’s humorous brushwork-filled silhouettes, which in the context of the exhibition’s title, makes them ultimately very desirable, as well as accessible.