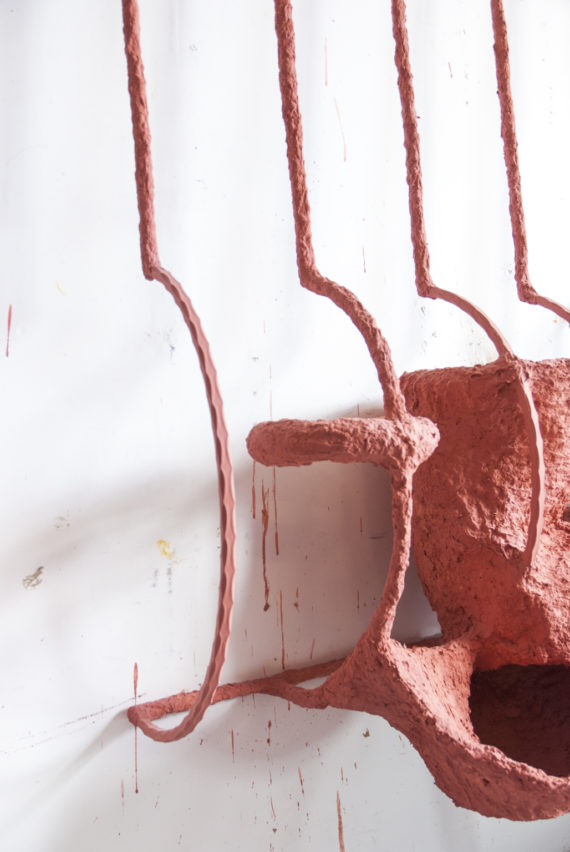 For a good few years now ‘Standpoint’  has run the Mark Tanner Sculpture award. The show due to take place this May was by 2019-20 Winner Olivia Bax. The combined factors of a solo show of an artist on the up postponed on Coronet Street due to Corona Virus seemed so alliteratively and linguistically linked it managed to grab my critical attention.

The great thing about making sculpture today is that when it comes to materials and process, the possibilities are arguably endless. The problem about making sculpture today is how to journey on this polymorphous quest and get beyond the plethora of maybe and actually make anything. The language of materials and process are often pivotal parts of this creative arena.

For me a particular materials coding and its direct denotative readings and wider associated connotative potential are frequently part and parcel of getting my head around sculptural work. Whether high-brow, say bronze or the low brow, say plastic milk bottles matter comes with ‘baggage’.  Through their wider societal application some materials feel more real and coded. Concrete is a classic example of this. Other designated ‘art’ materials carry less ‘baggage’ as if lying in unhatched latency, waiting patiently to be activated by an artist. Arguably this is the world of Olivia Bax.

Bax builds her delightfully madcap visual structures from the media often reserved for beginners;  Chicken wire, plaster, cardboard and steel.  She builds up her forms in a confidently crude manner. Her production values are raw, quick and immediate. There is no laboured smoothing out or apparent finessing of surface. Add in her preference of using bright flat colour on her sinuous gangly forms and one is faced with a body of work that joyfully flies in the face of much of the received sculptural wisdom I have just been musing over. Ultimately it manifests a preference for play over poetry. And that is exactly what makes it interesting. It is as much about what it isn’t as what it is.  Any viewer totally locked down into issues of ‘material integrity’ or high production values either needs to walk away from her work or preferably start to interrogate their own frames of sculptural prejudice.

There is a subversive nod to purpose in many of her forms, where vessel shapes or rung like ladder structures often conjure up the image of some kind of industrial functionality, but unlike the sober early works of Caro or solid forms of certain Cragg works, these are quick, quirky and emphatically doodle like in their core characteristics. In her 2019 work ‘Dam’ she created a wall piece which evokes an ‘Ikea’ bathroom fitting meets ‘Dr Seuss’ aesthetic.  Some 150cms across it suggests purpose then discards it by loose application of media and scale.  In her 2019 work ‘Skewball’ a conical cup form feeds into an intestinal vessel connected by a crudely formed spirally tube. Rough hand-made qualities with clear unadulterated textural marks signify the personal touch which underpins her work. Pigmented in purple in block colour this piece alludes to boozing and ingestion via some bizarre ‘Heath Robinson’ device. But it is also much more than this. Like all the work I’ve viewed on image this is sketch like in its production. Indeed the work steers well clear of any quasi manufactured aesthetics favouring evident artifice and immediacy. There is something curiously refreshing and uplifting about what she does, something that gives you something to ponder, but it also gives you an enormous visual hug in that process. Her use of materials for me is a carefully considered utilisation of their relative neutrality as signifiers and a euphoric exploration of plastic possibility. Arguably this choice allows her to say more formally as the media itself, say less.

I contacted Olivia to ascertain what was going to be in the upcoming re-scheduled show. She was keen to keep it under wraps, which I understand. She did discuss how the postponement has given her more time to reflect on the work she has been making. And how it has also allowed her to see the exhibition under a new (changing) context.  Reflective thinking is really important on the creative journey, so perhaps that is a positive to be taken out of this ghastly Covid chapter.  I am also acutely aware I am writing this from a screen based viewing. Sculpture is a tactile media, a physical entity in the world. In a primary encounter it forces you to circumnavigate it  at the very least. It is heartening to hear that this show will rise again and exist in the real rather than the virtual world of encounters. The show is now going to be called ‘off grid’ and if it lives up to her past work promises to be well worth a visit.

This writing was Supported by a bursary from a-n The Artists Information Company and Arts Council England.  It is the second in a series of five ‘reviews’ on shows cancelled or postponed due to Covid 19