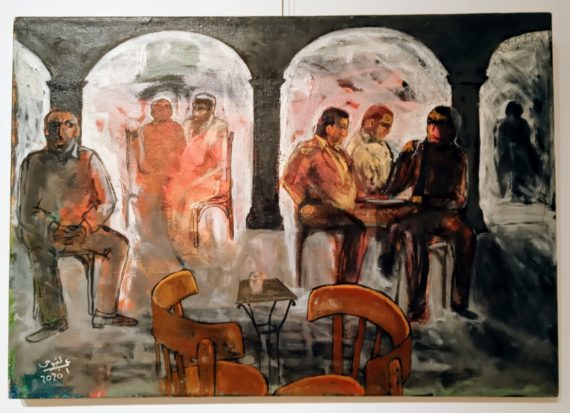 [I am lucky enough to be spending my Coronavirus in Cairo, where at least it is sunny and the galleries are open (distanced of course). I’m going to take you on a tour of the Cairo art scene.]

Painter Omar El Fayoumi’s new solo exhibition at the Nile Gallery was the first opportunity I had had to see this artist’s work live. Until now I had only seen it online and had always been impressed by both his stunning portraits and his highly atmospheric Cairo street scenes, which he paints in vibrant and immersive colours.

Born in 1957, Omar El Fayoumi studied painting at Cairo School of Fine Art and went on to postgraduate studies at the renowned Repin Academy of Fine Art in St. Petersburg, Russia. Since then he has been based in Cairo, which forms the inspiration and visual material of his work.

The Repin was the foremost school of art in Soviet Russia, training talented painters in complex traditions such as icon painting and realism. The challenge for painters in the post-Soviet era was to translate these highly traditional techniques into work that can resonate with contemporary audiences. El Fayoumi is an example of just such an artist. His pictures are not only technically excellent and cognizant of the history of art, they also speak to the viewer, telling us something about what the artist feels and thinks.

El Fayoumi’s portraits hark back to an early and perhaps lesser-known period in realistic painting:  the Fayoum portraits made during the Roman era in Egypt. These were wax-encaustic realistic portraits painted on wood and attached to mummies from Roman Egypt, named for the oasis region of Fayoum where they were found. Fascinatingly, recent DNA research on the mummies demonstrates that the Roman Egyptians were genetically almost identical to today’s Egyptians. This adds a piquancy to El Fayoumi’s portraits, as uses the ancient, archaic style to make modern versions of the people of Egypt.

However, the exhibition also presents dynamic and revelatory scenes from Cairo’s older streets. With a sly nod to the colouring of the Impressionists and post-Impressionists, the first artists to depict cities under artificial light, El Fayoumi’s Cairo is both recognisable and timeless. Is he showing us Cairo of the 1900s, the 1920’s, the 1960s or today? The socioeconomic conditions, the way that folks gather in the cafes and the city landscape, the lighting and the animals, are all there as they were in the past. It is an appealing version of the city, observational yet nostalgic and not quite romantic.  The pictures offer a sense of how it feels to inhabit the small streets and alleys of old Cairo.

Gillian Mciver writes, makes art and films. She wrote 'Art History for Filmmakers' (Bloomsbury Press) and lives at www.artsite.org.uk Her main blog is at www.theartraveller.com