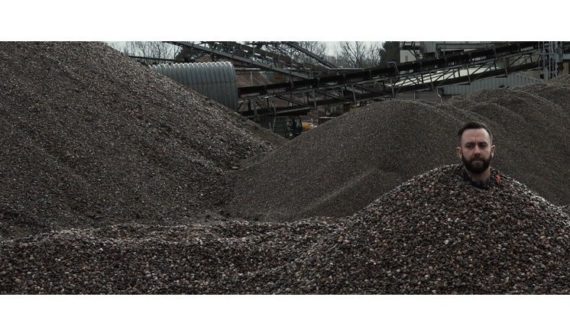 Regional open exhibitions have a challenging course to steer in a London-centric art world. Particularly in a hard to define region like the East Midlands in comparison to somewhere like say Yorkshire, which from a regional perspective exudes a strong sense of having an essence as an entity in itself. As I write this I am acutely aware of the pitfalls of personifying a region, but bear with me. Here in the East Midlands things seem much more disparate. Which is kind of what I like about it.

The worst kind of regional open can act like a consolation prize for ‘local’ artists and here I use the term ‘local’ intentionally with its all artistically limiting connotations and implications. In essence parochial. Every artist lives somewhere and is by default a ‘local’. But it is more a matter of outlook. Your physical place may be local but your critical location or artistic output can arguably be in a different galaxy. Due to a combination of art colleges, affordable rents and great galleries, this curious non region is alive with exciting artistic output that is far removed from the parochial.

OPEM 4 stands testimony to this. The show is selected down with only 8 artists picked: Reece Straw, Jake Kent, Stephanie Douet, Jake Moore, Selina Mosinski, Matthew Chesney, Ellen Brady, Colette Griffin. The show is dominated by a palpable sense of humanity. By this I mean work that deals with being in the world.

From the moment you enter the darkened space you can kind of smell the substance. First up you meet Mathew Chesney’s delightfully absurd Video. The curator is stuck. Chesney is impressive as an curator and artist. Something rather rare.

Here he sits centre screen in a state of bewildered pathos, buried up to the neck in a mound of gravel, as the day to day business of the gravel production plant continues to produce useful matter for the functional world. As sleet falls and trucks pass behind, he appears quite literally stuck and weighed down in a surreal state of curious stasis. As the cold wet weather howls away the protagonist sits there with dead pan impotence, nothing but eyes looking left and right as if hoping for some kind of resolution. Very much like being an artist really, obsessing and struggling with oft daft situations. Many lost nights over minor internal creative arguments with one-self while the ‘real’ world trundles on by about its business. This was my second exposure to this work and I could watch it over and over. His second piece continues to probe the creative process through a staged dialogue in a theatre space where exhibition planning emails between Chesney and Ashley Gallant, curator at The Collection are read out loud as a staged and filmed performance. The same self-deprecating found in the first video humour pervades this work. It is equally probing and playful. Art of ideas, also art that does not ignore the notion of audience. Chesney understands to have dialogue you need to draw the viewer in. Not as bullshit add on, but as an integral strand of the work.

Jake Kent combines old torn sections of denim clothing with clumsy hand fashioned ceramic elements, water pumps and other odds and sods of gathered stuff. It reminds me in part of the stuff put together by an eight year old trying to get it right, an eight year old who keeps trying, keeps failing but continues. Visually clumsy, but all the better for it. This faux naivety works well for me. As humans and artists we have to continue don’t we? To enjoy this work, it relies in part on trusting the fact that the artist is eschewing traditional craft skill in favour of discourse on the act of making or the need to self-actualise and build a world through making. It is an art of play. But play with substance.

Collette Griffin showed a mixture of creative strategies, but I was particularly drawn to the flat yellow metal plate forms which were leant against the dark grey walls. As forms they occupy a curious quasi domestic yet pragmatically defunct aesthetic. The bendy blobby shapes evocative of Alessi design. This sense of formal ambiguity made my eyes loiter and heart warm. Both good things to feel when looking at art.

I was also struck by the engrossing soundtrack and dynamic animation of Jake Moore who takes disease and medical matters as a creative start point. The shapes and energy of the pulsating, morphing, linear structure were bewitching and held my attention firmly. The only thing that stopped my viewing was the expiry on the rather expensive Flaxengate car park.

The remaining four artists are equally worth a good look. The show opening this Saturday across the corridor may also be worth a butchers.