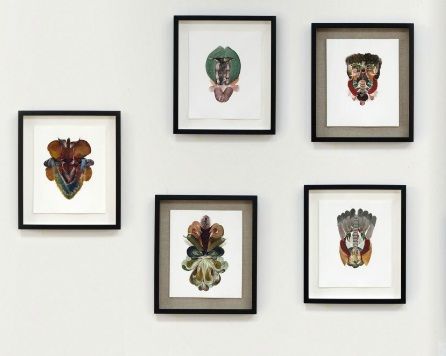 The Oriel Davies Open 2012 showcases the work of 38 artists selected from over 600 diverse submissions. This exhibition is a demonstration of the wealth of artistic practise both locally and internationally, with each piece pushing the boundaries of contemporary art. Within this show visitors can find a range of innovative materials used in a variety of ways, creating social and environmental juxtapositions.

Among the varying mediums used in the chosen submissions for this show, visitors can find sculptures from artists such as James Clarkson, Ruth Boothroyd, and Rosie Dolton, whose piece ‘Untitled’ (2011) consists of a wooden crate colourfully embroidered with roses, turning something old or mundane into something surprising and attractive. Ben Woodesen, another successful artist chosen for this exhibition, has created a mixed media collaboration which consists of a precarious sheet of glass balanced on a bungee cord in the corner of the gallery space, entitled ‘Slice and Dice.’ This piece feels like a physical manifestation of the precarious and unpredictable nature of contemporary artistic practise, and perhaps the unease felt by emerging artists. ‘Coal Sphere’ (2011) created by Jessica Lloyd-Jones, allows the viewer to find something intriguing and oddly beautiful where they perhaps normally wouldn’t. Her piece engages the viewer, requiring them to look into the lens of the coal ball, where they will be surprised to find plant life growing within.

There are also a stunning collection of photographs on show for this exhibition, including artists such as Tom Lovelace, Anna Solum and Barbara and Zafer Baran, whose ‘Moon Drawing 9764’ and ‘Star Drawing 7012’ pieces use scattered light to create hauntingly beautiful compositions. One of the larger collections of photographs within the gallery space was contributed by Mike Perry, who has titled his pieces ‘Mor Plastig 15 Bottle Grid’ (2012). This photographic series consists of 15 images of old bottles, found washed up by the sea, presumably along the Welsh seaside. The textures and colours of these dirty, squashed and cracked found objects makes for surprisingly attractive images, perhaps indicative of the vibrant yet rugged landscape in Wales, and these certainly reflect the diverse and colourful amalgamation of social cultures found in this exhibition.

Artists using more traditional mediums such as drawing and painting have still managed to challenge any confines of the materials for their submissions here. Andy Harper’s ‘Actus Reus’ oil pictures are beautifully detailed and rich in colour and texture, and Angela Smith’s series using gloss, enamel and oil has created marbled cross sections of animals, pushing the boundaries of traditional representation. Julie Cassels’ silent video painting ‘Mountain Lake – Gold Dress’ (2011) has combined two mediums to create an image in which the stillness of the photographic image becomes animated – a truly intriguing and innovative piece. This is certainly not the only use of video in this exhibition, as the overall winner of the Oriel Davies Open, Melanie Manchot, submitted a video piece which explores chance encounters and identity. Short film ‘Decommissioned’ (2011) can also be found on show here, created by artist Mary Vetisse, who won the student prize in the Oriel Davies Open 2012. Vetisse’s video appears to focus on changing landscapes and memory, seemingly personal to the artist. Viewer’s are confronted by the familiar occurrence of places moving and changing around them, and reminded of how photographic images can force-feed our memory.

The Oriel Davies Open 2012 is an overall engaging and varied exhibition, showcasing both personal and contextual pieces from varying locations. The assortment of pieces comment on different social and environmental stories, and boundaries with regards to medium and subject are certainly pushed. Here viewers can find a mixture of engaging and thought-provoking mixed media and video submissions, alongside other diverse classic and contemporary techniques such as sculpture and photography, which take the mediums to a new level. Some pieces have even integrated and hidden themselves within the gallery space by chipping away at the gallery wall or replacing traditional electric sockets with plugs connected by plaited hair, both whimsical submissions courtesy of Shan Hur and Sarah Pager. On the whole this exhibition provides an intriguing assortment of creative submissions, showing a small but stunning snapshot of local and international contemporary art.