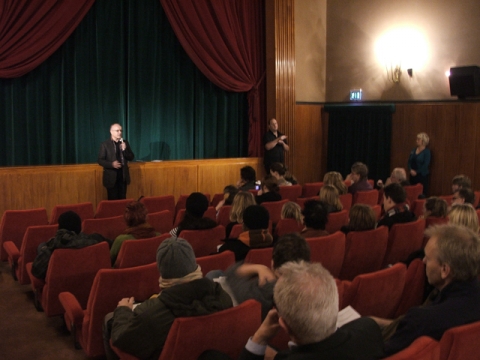 I was in Sweden recently – prompted by an article in the October issue of a-n magazine re an International Video Festival taking place in the city of Orebro, which mentioned contemporaries of mine I hadn’t seen for a long time.

It was an ambitious sounding programme. 10 curators from 10 different countries selecting a body of work which explores the diverse range of visual languages and practices currently being realised in video art.

When I completed my MA at Norwich School of Art in 2000, Jonas Nilsson and Eva Olsson had been instrumental in encouraging a small collaborative video project with graduating students, to make individual videos of one minute each presented in a showcase reel and run in a loop, which touched on seperate artists practices. Was this I wondered the germination of the Internatinal Video Festivael in Orebro?

And so it was I made my way on an autumnal day in October through the boulevard style streets of Orebro to the Bio Roxy cinema , one of three venues hosting the Festival- the others being the Orebro Lans museum (the county museum) and the Orebro Kunsthall (a contemporary art gallery), all of which were within sight of each other and the city’s handsome castle, which made walking between them easy.

The video selections were introduced by the curators themselves, whose own work in the main, featured in the 30- 40 minute showings. They were delivered in English and gave a fascinating insight into the contextual background against which the videos were made – in the case of the Balkan countries and Egypt, turbulent political situations which inevitably impacted on the flavour of the work.

There was the question of how to source video art and the necessity for networking as a means of sharing good practice, and discussions about video art definitions – coming as it is out of a very broad range of visual practices. The Danish artist Jeannette Land Schou who has been making video art for twenty years described them as poems, often with an underlying anarchic element, which struck me as as good a definition as any. And the ’poems’ I saw in Orebro were good: inventive and intelligent, funny and moving, glimpses into cultural worlds which made you realise what a rich vehicle video art is- capable of carrying complex and sophisticated messages, aided by its’ democratic nature- making video art is still relatively cheap. The audience was small and intimate, but given the calibre and number of artists work being screened – there were 106 videos in total – disappointing that more people weren’t grabbing the opportunity to engage in such an experience. Congratulations to Art Video Screening for mounting such an ambitious programme of video art, and roll on the second Orebro International Videoart Festival, which I hope will find a scale of audience a festival of this magnitude and quality deserves. 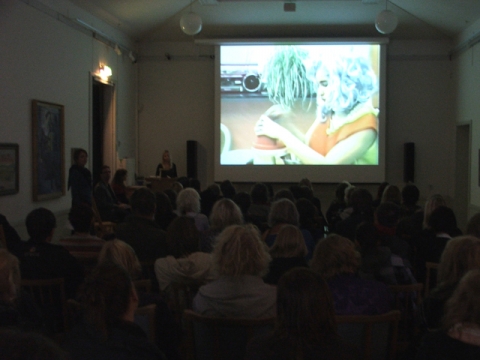