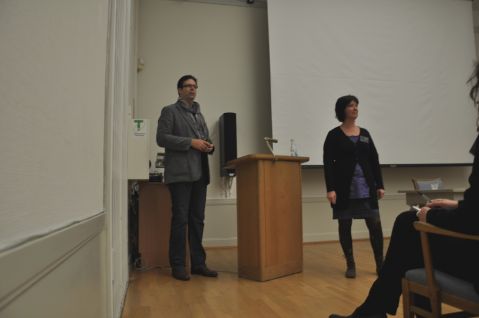 If you want a great overview of what’s out there in video art at the moment then the festival format provides a brilliant opportunity to get just that.

If you want to combine it with warm autumn sunshine in a hospitable Swedish university town, then Ã–rebro International Videoart Festival ticks all the boxes.

It was my second visit to the town in two years to see how the Festival had developed since its inception in 2008. It’s the brainchild of Jonas Nilsson and Eva Olsson of Art Video Screening who in 2008, created Ã–rebro International Videoart Festival to provide a platform for video artists to secure the exposure and audiences they felt they needed in Sweden.

For this year’s festival they invited 10 curators from 8 different countries to present curated shows of around 35 minutes each, run in a loop form.

It amounted to 97 video pieces by 87 artists from 28 countries and makes it the biggest festival of its kind in Sweden!

It was opened by Lene Crone Jensen, until recently director of the Public Art Gallery in Gothenburg, who introduced the festival in English with a zest and rapidity that amazed my English speaking self and set the tone for the international character of the 3 day event.

She articulated what an ambitious and important venture the Festival was for Sweden, happening as she put it, in an area of Sweden often described as peripheral. She spoke about the opportunities it provided for immersing ourselves in the video art medium and the insights it potentially gives us into what it means to work with video. Eva Olsson took up this comment when she reminded people just how long video art takes to make –a short 2 minute piece representing possibly months of editing work.

With this in mind I began my video art fest- an intense and exhilarating looking experience which did indeed embrace the wealth of video art practices identified by Jensen. There were works which used the body as a primary means of expression, work which exploited sound, work which relied on slow meditative looking, work which addressed gender, work with strong filmic qualities, work with graphic sensibilities and inventive dialogue.

And the Festival had grown in other ways. They had collaborated with Ã–rebro konsthall to show the video work of Erik Olofson- a fascinating and clever 26 minute looped piece which kept you guessing. And at the Konstfrämjandet Bergslagen in WadkÃ¶ping (the old Falun red timber settlement just outside the town, which was formed from ancient Ã–rebro townhouses preserved from demolition in the 1960’s) they showed the work of Etta Säfve, a Swedish artist practising in the Netherlands who has strong family roots in this area. Her quiet, meditative ‘low tech’ work suited the interior of this tiny Swedish townhouse, filled as it was, with its own residual memories. There were lectures by Petra Johansson of the Borås konstmuseum about the museums video art collection, and the project ‘Sharing Art’- a collaboration with this years’ Gothenburg Film Festival – and by John Sundholm of Karlstad University on the origins of video art. There was a film too by the veteran Swedish artist Guvnor Nelson. Indeed work for everyone.

And yet, not quite everyone seemed to be there. Experiencing video art which is not TV and not quite film, requires a particular sort of looking or head space it seems, which audiences are perhaps nervous of trying. They are definitely missing out!

Two pieces in particular came through as Festival favourites: ‘Synchronisation’ by Rimas Sakalauskas from Lithuania, whose memorable video manages to animate iconic Soviet era buildings with a poetry and invention which is breathtaking, and ‘Runaway’ by Flo Kasearu from Estonia which follows a white horse projected onto the streets of Tallin which gallops through the night tracked by a car. They were both fairly long pieces – 8 minutes and 14 minutes respectively and perhaps keyed into my own particular interests – but that’s the point. The Festival embraced a wealth of tastes and approaches which a wide range of people could enjoy. In this, they were ably assisted by the curators who had worked hard to present cohesive bodies of work which at the same time revealed the breadth of video art forms out there.

It’s going to take time, and another Festival, but I am hopeful that the dedicated audience who did enjoy the work will spread the word: and the numbers are up- double those of 2008.

Included in the programme was the work of students from Ã–rebro Konstskola who showed work which revealed a maturity and innate understanding of video art which was impressive. It surely heralds the start of many good things?

What the Festival needs now is the confidence to convince people of the gem they have in their midst. Here’s to the third Ã–rebro International Videoart Festival. Let it be the biggest and best yet!