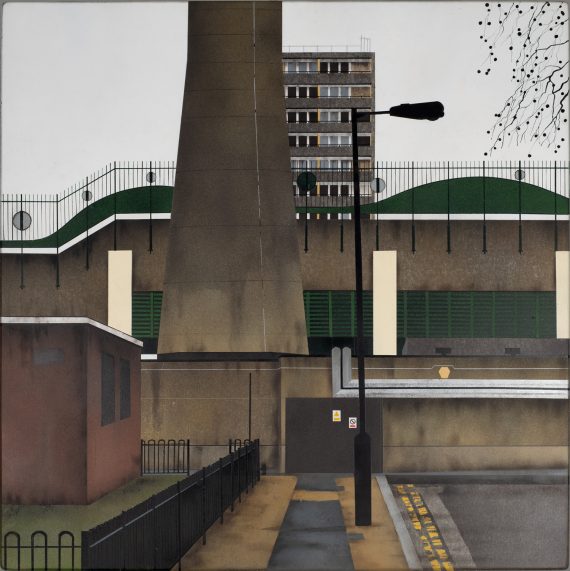 One of the most beautiful experiences to be had is to approach an artwork from across a gallery, assuming it to be a photograph, only to discover it is a painting of either consummate skill or surprising texture.  There is a point as you near the work when perception shifts and you are asked to reconsider your initial understanding, and address more information and ideas.  This phenomenon is most clearly manifest in ‘Out of Time’, Mandy Payne’s exhibition at Huddersfield Art Gallery.  Her work demands and rewards close inspection.  Most of it uses concrete as a substrate, reinforcing the real-life materiality of the principle motif, Brutalism, and, like a method actor, the artist’s deep, emotional connection with her subject.  There are also works on marble amongst the fifteen on show.  Often the surface remains untouched, reminding us that we are looking at a painting of a concrete building on a piece of concrete.  Mandy is  adept at inventing both precise and seductive ways of rendering the variety of textures she encounters.

In ‘Beginning of the End’ we are confronted head-on by a section of a Brutalist housing development.  The weathered front is created by the subtlest staining of the existing, mid-grey surface; two darker fascias have their rougher brickwork suggested by mesh pressed lightly into drying paint.  In ‘Precinct I’ the swirling pattern of the marble base becomes an apocalyptic sky, an ominous backdrop for an off-the-peg high-rise block and a generic, shopping centre outbuilding.  The objecthood and bearing of marble is a marked counterpoint to this undeniably deprived area.  A row of black bollards in the foreground serve to create a pictorial space that the fantastical sky defers, but also thwart any attempt to imagine ourselves entering the painting.  These might be slightly, and understandably hesitant steps, for this is not an attractive part of the city to wander around.  It is not photogenic in any conventional way.  No bright lights and glitz here.  Payne’s focus is firmly on the dark grey side of town, with a measured and apposite treatment, cool, understated application of paint that betrays little about the artist’s feelings towards her subject other than a great reverence for painting.  Like the functional architectural design at hand, there is no fancy flourishing or bravura brushwork to overtake the power of the motif’s meaning.  The printmaker’s quest for efficient methods of mass reproduction is evident, and the large glass case in the centre of the exhibition space exquisitely lays out Payne’s techniques, both formal and experimental.

The works’ titles, however, are more candid, hinting at disillusionment or a sadness with the loss of established communities and their concomitant spirit.  ‘Remnants of a Welfare State’ stands as a memorial to the failure of social housing with Payne’s barely-suppressed anger making it all the more poignant.  This is an epic painting, almost panoramic in dimension; the full frontal composition evokes the Modernist grid of Agnes Martin; the colour scheme of relentless drab grey and filthy ochre lifted only by four rich blue panels that could, in another world, be Barnett Newmans.  The windows, and therefore the inhabitants, are so close together in this monumental construction.  Two red, graffitied numbers are the painting’s punctum.  There is no logical sequence and their meaning, if they were ever intended to have one, now lost.

The exhibition, the gestalt, like a Guardi capriccio, sees identifiable parts of English cities amalgamate to form an oppressive, mythical metropolis where the sun rarely shines and its citizens remain indoors.  There are glimpses of human activity – recurrent graffiti, as if someone else has taken credit for and signed the painting, echoed again in Payne’s intelligent use of spray paint; legitimised street art on a wall in the mid-distance, ironically recalling High Modernist painting, even more keenly displayed in the near-Mondrian abstraction of ‘Urban Geometry’, brings shafts and flatter planes of colour to the enveloping eeriness.  The effect of seeing the works together is claustrophobic, how it should be, accurately replicating the real, human experience of urban negotiation and navigation.  We are immured in this city of concrete.

A tantalising question remains as to a subject that, while lending itself so perfectly to picture-making, is the exact nature of its attraction.  Yes, the grey and splashes of richer colour combine so well; the pleasing geometry and lines of perspective create a dramatic sense of space, and the sweeping curves of the flyover/overpass lead the eye into and through the painting.   Is it a style of architecture from such an austere time that its poignancy reverberates down the ages and is chillingly relevant again?  Does it haunt us?  This personal investigation via painterly and printmaking techniques is so engaging that its greater relevance is revealed.  Mandy Payne invites us all to contemplate the more peripheral aspects of our rapidly-changing contemporary urban environment, as well as consider the socio-political implications of such change.  She is recording it before it is gone and becomes something very different and more exclusive. Regeneration, gentrification, in so many ways, is not for everyone.