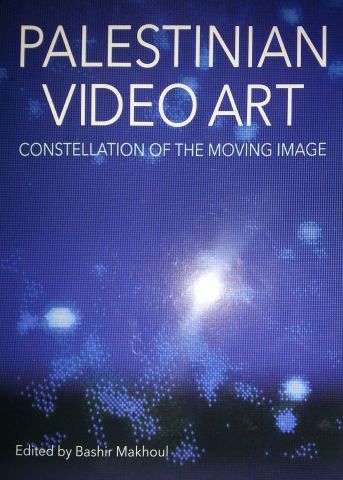 The book begins with a premise that the reader is invited to share, and in sharing is taken on a journey into a world little-grasped beyond the confines of the news report on the TV screen, or the screaming headline. Palestine. The premise that the book operates from is that of the occupation of Palestine by Israel, and the ensuing oppression, outrage and injustice visited upon the people in the Palestinian territories. Within this framework, the position of Palestinian artists is discussed. The book eschews debate on this subject, and offers a purely Palestinian-focused perspective. It does not discuss, for example, work by Israeli artists who are equally critical of the occupation situation, the separation wall etc.

This is not in any way a criticism of the book. This premise serves to focus the book very finely upon a position and a perspective, and then explores the art made within this position and perspective with remarkable thoroughness. Since the position of the Palestinian artists here discussed needs to be appreciated, the book clarifies this very well. It is, however, a caveat of the book; there are no different points of view, no grey areas. This might be difficult for the reader, but bear with it. The book unfolds many marvel and many challenges.

However one thing that is fascinating and problematic is even in the title “Palestinian” Video Art. The question of identity – Palestinian identity – is at the forefront. It arises repeatedly throughout the book as each author tries to get to grips with it, but then it slips away. By whom, and for whom, is Palestinian video art made? Many of the artists featured are no longer based in Palestine, and some have never been – they “identify” as Palestinian due to family heritage. And the audience – are they in Palestine? Perhaps some of them are, but in an interview online, Gaza based artists Tarzan and Arab, say that “in Gaza people are interested in basic survival and not in art.” Editor Bashir Makhoul discusses the problem of identity, artist and audience in a wide ranging and incisive essay that opens the book. The essay asserts that “Palestinian” is both a real, geographical place and a political situation created by and upon, human bodies; but it is also a shifting, multiple and fluid identity that can sometimes be chosen, and that choice is a political act that binds the chooser to that interface of human bodies and geography.

To a member of the “global “ audience, one not involved with Middle Eastern politics, what does the book offer? It is the first book to actually address the question of Palestinian video art in its multiple forms in an explicit context. It brings together some of the most important artists and critics in a weighty (literally!) authoritative text that rarely deals in clichés or art-world obscurantism. It offers a window into an art practice that is always de-marked by its lack of freedom from political ignorance or political complacency. And yet, the question of “identity” and its centrality to an artists practice remains an unsettling and inconclusive question. And the audience? The reader is left unsure if “Palestinian video art” is the expression of artists reflecting and then representing a nation or a people, or a consciousness-raising exercise and gesture to the world outside the region? Can it really be both?

And then the reader must reflect upon the tools of understanding needed to comprehend work made outside the Western cultural tradition, especially in particular the contemporary situation. Until the 1960s the flow of cultural discourse between the “Middle East” and Europe was not subjected to quite the same political (including immigration) stresses it is today. Today, for the mass of the population, there is the mutual isolation of daily life. In this relative isolation, political and cultural change happens. How is it / is it communicated through Euro-American art forms and initiatives? For a very few elites, there is a kind of global one-ness mainly expressed in art. Biennials, touring programmes, international foundations.

The question I am asking here is, inevitably, how can we the reader /audience – stuck in our quotidian isolation from the real life of the Palestinian (Egyptian, Lebanese, Syrian, Iraqi, etc.) person – resist adopting the Orientalising approach to this art? How do we resist seeing the “exotic” and exciting, in the video-art encounters with checkpoints and military threat, from which we are so sanitorially excluded in our daily life.

The book has many excellent essays, notably Sean Cubitt’s discussion of the uses of video within the art context with reference to specific works. The highly knowledgeable Cubitt offers a stimulating and thoughtful analysis that also provokes a useful reconsideration of the role of video in art today.

However, the most urgent, the most provocative and the most satisfying is Omar Kholeif’s critique of the work of crowd-pleasers “Tarzan and Arab,” Gazan artists Ahmad and Mohammad Abu Nasser. Kholeif pulls no punches: his essay eviscerates the “neo-colonial” ironies that pile up in the work of the aforementioned artists with their pastiche Hollywood (“Gazawood”) détournements – or are they recuperations? Kholeif, a curator and film programmer, laments the way that these and other younger artists seem to be unaware of the dangers of oversimplification and reliance on irony. Here he echoes ?i?ek and others who are cautious about irony, wary of its ability to create a fantasy of transgression that obscures the author’s inadvertent complicity. He points out that the discourses around this kind of art engages with the idea of Palestine and Palestinians as perpetual victims, in need to help and opportunity, and not agents. He asks artists to critically examine and take responsibility for, the “opportunities” under offer.

In this rich and essential essay – which should be reproduced widely as a model of critique – Kholeif’s position above all suggests to us a way out of the “Orientalist” minefield: by actively questioning institutional forms and discourses together with the artists – thus bring together the artist and a critically engaged, informed audience.

The book is an obvious must for any university collection especially any institution teaching art history or moving image practice, and is a good addition to any video artist and/or politically-engaged artist’s library. It is thorough, comprehensive, contentious and lavishly produced – everything a major contribution to the knowledge of visual art needs to be. Its limitation is demonstrably the fact that any book about video is unable to offer more than still images, and unfortunately it does not include an index or comprehensive list of web links where at least some of the videos can be seen. However, web links are subject to change. It was possible to track down at least some of the artists in the book and see their work, albeit in the limited form of You tube and Vimeo. Two of the most interesting, discussed by Chris Meigh-Andrews in his essay, are Basel Abbas & Ruanne Abou-Rahme.

Their Vimeo channel is https://vimeo.com/ruanneandbasel

The vimeo channel does not give a sense of their installation framework of the videos but does give a flavour of their work and approach. Abbas & Ruanne Abou-Rahme were featured in the ICA’s summer 2013 programme.

Bashir Makhoul and his contributors, and publishers Palestinian Art Court – AL Hoash, have done us a great service. By offering this comprehensive and thoughtful, considered compendium of writings and “constellation” of artists and their works, they have begun the process of firmly reintegrating Palestinian art into mainstream global art discourse, as well as offering up a fascinating reflection on the practice of video art. In this latter capacity, it raises countless possibilities for any artist, to take that art form forward.

[the book is available on Amazon UK] 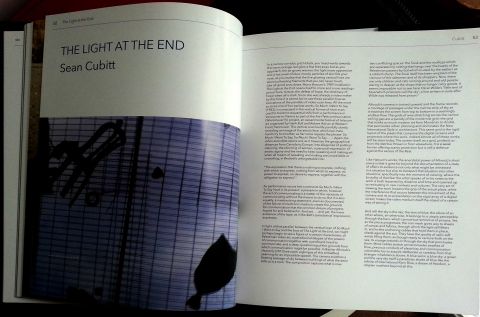