This show may be filed under ‘Historic’ (Heron died in 1999, after all) but his brushwork, mark-making, and philosophy of painting are remarkably contemporary. 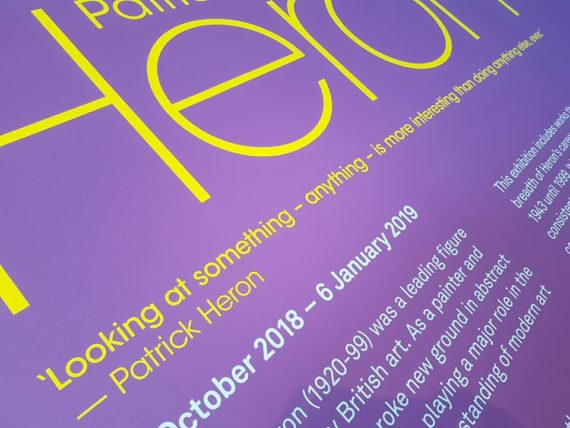 Shown in public for the first time, a series of gouaches produced just before his death use paint applied straight from the tube to create spiky, punk forms – think David Hockney’s recent clumsy, lazy, ‘that’ll do’ ipad drawings, but in real paint, on a real surface, and painted with real vitality and urgency.

These, Heron’s last works, are the first thing you see as you enter this exhibition. This is not a biographical retrospective, but rather one which connects the ideas he explored, placing a 1943 work alongside one from the 1960s, and these 1999 painting right at the start.

Like the late gouaches, Heron’s 1990s garden paintings feel remarkably fresh. Painted over a white background, his shapes, lines, and marks are very similar to those seen in the work of many illustrators working today, and his palette of pinks, turquoise, yellow, and deep purples could be straight from the brand book of a Millennial’s creative startup.

In these paintings, Heron breaks the physicality of the garden into the simplest lines and forms, and in doing so captures the real lived experience of that space. By the 1960s, Heron was insistent that everything was contained within the boundaries of his canvas, and there was no reference to anything outside the painting. These were paintings about painting. These 1990s works seem to be an attempt to break out of that frame, a move away from abstraction, visibly referencing the real world – but they could only be painted by an abstractionist. 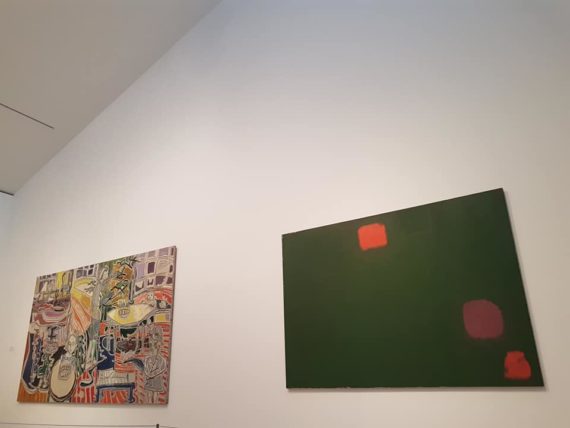 There is a consistency to Heron’s work, across the years, which this non-biographical retrospective plays with. In 1962 Heron said that ‘colour is both the subject and the means; the form and the content; the image and the meaning, in my painting today.’ That holds true across all his work, and there is a direct line from ‘The Piano’ (1943)  through the garden paintings to those final gouaches. While radically different, they’re visibly from the hand of the same artist. Private View, a tombstone-sized review of British Art published in 1965, said that ‘Heron has undressed the problem of colour and form in much the same way, and from much the same motives, as old-style painters undressed the living model.’ The paintings collected here allow you to follow his process.

Heron was also respected in his day as a writer on art, In Private View, Heron appears alongside Peter Blake, David Hockney, Elisabeth Frink, Ivon Hitchens and Barbara Hepworth. And while Lord Snowdon photographs him painting, John Russell writes about his writing: “For years Heron wrote week by week in the New Statesman and month by month in Arts (New York) on painting of every sort, and never said a silly thing.” A couple of examples are included here, and they’re a fascinating glimpse at another world that Heron inhabited. 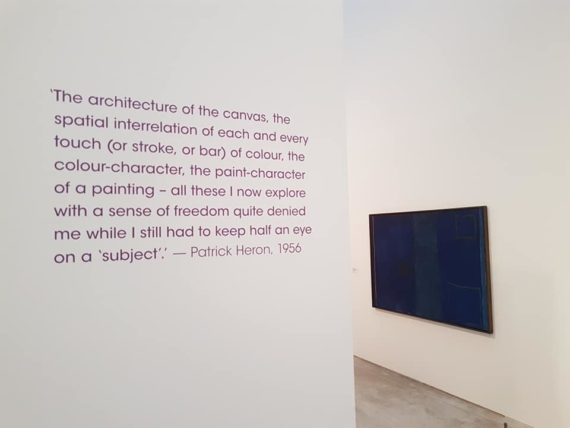 Hugely important in his day, Patrick Heron has been somewhat overlooked lately, largely forgotten by the end of the 20th century and rarely revisited in the 21st. This show, jointly curated by Andrew Wilson (Tate Britain), Sara Maston (Tate St Ives), and Sarah Martin (Turner Contemporary), is a reminder that he’s one of our nation’s Great Painters.