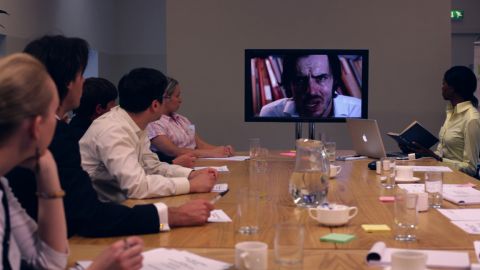 Paul Rooney’s Bellevue is a dark and, at times, comical film that offers a welcome edge to the otherwise utopian setting of Harewood House. This magnificent 18th century home was the location of the film’s production in 2009, and its Servants’ Quarters are now the setting for its screening. The contrast of the bleak backdrop of the domestic offices with the opulence of the lavishly furnished rooms upstairs, projects a duality that is at the core of this film.

Bellevue takes its inspiration from Lunar Caustic, a novella by Malcolm Lowry (1909-1957) that was published posthumously in the early 1960s. It tells the story of Bill Plantagenet, an alcoholic and failed jazz musician residing in the psychiatric ward of New York’s Bellevue Hospital. The film intertwines scenes from the text with those of a fictitious marketing focus group on an away day at Harewood House, discussing the use of Lowry’s writing in a future campaign. Both the novella and the film explore the concept of sanity and the boundaries of its definition.

Rooney’s portrayal of addiction and intoxication, and the paranoia and neurosis that surrounds it, is as visually and aesthetically rich as Lowry’s text is linguistically. Both are equally disorienting. The film’s lack of narrative continuity and its multiple sources of reference visually echo the cacophony of stories, music, poetry and rhymes through which the patients of Lowry’s psychiatric ward communicate. Like the rough jazz of its soundtrack, Bellevue functions like a series of improvisations on a theme – seemingly random yet tightly controlled and always returning to a central point. It is a dense film that skilfully reflects the complexity of its subject matter and, with some light self-mockery, manages to steer just the right side of impenetrable.

Lowry’s novella was loosely autobiographical. He is said to have checked himself into Bellevue Hospital to gather material, yet it is also claimed that he was committed by friends who felt his alcoholism unmanageable. It is an ambiguity that haunts the book and renders us distrustful of its narrator. This blurring between truth and fiction is a common theme in Rooney’s work, as is the use of different modes of storytelling and narrative. He is interested in art’s ability to allow us to experience extreme depths of desperation while simultaneously offering the reassurance of a safe return. Screening the film in its place of production operates as a touchpoint and ever-present reminder of the film’s status as artifice.

On a more practical level, however, the film’s showing at Harewood House to some extent compromises its reception. The stone floor of the Servants’ Quarters makes the acoustics difficult, which is problematic for a work whose significance lies so heavily in its exploration of language. The majority of the room’s spotlights are turned off, yet the light levels are still relatively high and the image a little washed out. The difficulties of accommodating different visitors, of encouraging viewers into the space, and no doubt heeding lengthy health and safety precautions, arguably mean that some form of compromise has to be found, but it is a balancing act that is not yet quite right.

Despite these small issues of display, the film is an otherwise excellent example of the rich relationship that can exist between contemporary art and historical sites, and which allows for a vital re-reading of both. Bellevue is a challenging work that requires time, yet the effort is ultimately repaid both in our appreciation of the film, as well as that of the beautiful setting of Harewood House, whose picturesque grounds provide the perfect Romantic backdrop to such existential angst.

Bellevue was co-commissioned by Film and Video Umbrella with the Bluecoat, in association with Harewood House, Leeds and Spacex, Exeter. 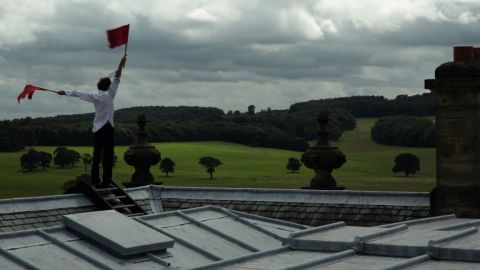