Platform P at The Duke - a-n The Artists Information Company 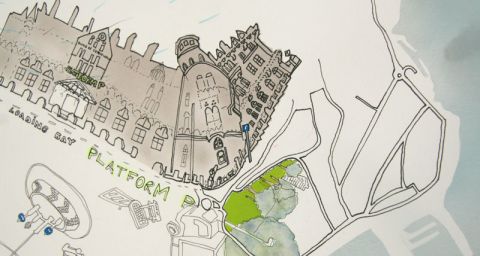 The Duke of Cornwall Hotel is a striking Victorian Gothic building set just away from the centre of Plymouth. Set among a mix of office, residential, and other leisure facilities, its ornate surface and complex silhouette rises suddenly from the streets. Its composition shows a selection of decorative and spatial elements used in British buildings that revived features of medieval church architecture for secular purposes. This building, was secured as a site or venue for a weekend of works curated and managed by Platform P (Edith Doove and Ray White). The project took place over Saturday and Sunday the 5th and 6th of November 2011. Something of the eclecticism of the design, décor, and purpose of the Duke was evident in the selection, presentation, and management of the event.

It was almost ‘access all areas’ as the curators had negotiated the use of a number of bedrooms on several floors, an unused small bar on the ground floor, the main bar, the ballroom, corridor areas, and some meeting rooms while the day-to-day life and work of the hotel continued around them. Works presented ranged from the re-hanging or re-display of images linked by historical association to the hotel’s name, work made specifically for the event in response to the request from the curators, or responding to the context of Plymouth, and works re-made on site, or curated for a working hotel environment.

Some pieces were shown in rooms being used by guests, and their personal belongings were evident in the space beside the art pieces. In the installation by Alexandra Dementieva, balloons filled the en-suite bath and a camera underneath them was video-linked to the room’s wall-mounted flat-screen TV. Garments hung on the clothes rail and make-up items were on the dressing table. The work exploited some of the standard fittings of a contemporary hotel room, playing on the imagined luxury of a super-large bubble bath, and setting it against the dullness of late night hotel television on a business trip.

Sally Hall had responded to a bedroom in the process of refurbishment. Using adhesive tapes of different colours and widths she re-articulated the partly stripped twin-room (little remained except for two flounced bed canopies), drawing our attention to small details of the fittings or to the traces of absent furnishings. Her intervention operated partly as a schematic representation of the space concurrent with it, like a one-to-one scale map. As viewers we noticed busy and quiet areas, things present and things no longer there, over the top drapery, faded patches, and the mandatory fire escape sign.

Ryan Curtis worked on his project [Title] in the Clam Bar, an unused wood-panelled bar-room where stacked rolls of spare carpet and underlay filled almost half the space. The contingency and uncertainty of the room worked well in juxtaposition with Curtis’s delicately propped and precariously balanced sticks, bars, bricks and other found or salvaged materials. The visitor held their breath in case any motion, even an exhalation would dislodge the structures. Of course they fell down, even without someone bumping into them, and then Curtis rebuilt them in another temporary transient contingent arrangement. Like the room he was using, they were transitional, between states, and could be quickly gathered up and removed leaving no impression, except documentation or in the recollection of those who had braved the space.

In contrast to Hall and Curtis’ interventions directly onto the space of the hotel, Nathalie Hunter had made a series of framed coloured drawings (none larger than 50cm at their widest). She presented these on the floor of one of the bedrooms on the fourth floor. The room was busily decorated in Victorian patterns, in busy imagery of coral and vegetation, in pinks, yellows, and greens (with pinks predominating). The setting worked to make the lightly painted drawings seem cool and calm. Hunter had created imagined panoramas and aerial views of Plymouth using internet resources (Streetview, Flickr etc). In the bedroom the visitor could compare these ink and wash images with the ‘real’ buildings and locations outside the windows. Showing the works on the floor maintained their orientation to the depicted topography, and in the same moment disorientated the viewer who towered over the drawn streets and water and needed to adjust focus and mode of attention when they looked outside.

Dressed as a ‘chambermaid’, or member of housekeeping staff, Anna Francis wheeled her trolley through the corridor and hallway spaces. She paused to polish a mirror, to dust a ledge. There were ‘real’ cleaning materials on the trolley, and alongside them she had a series of small multiple works by other artists that she had curated, making her trolley a mobile gallery / art shop. She chatted to visitors about the works, and engaged them in her double or even triple role of performer, curator, and guide. In the absence of an MC or maître d’ for the event Anna Francis seemed to take on this role, greeting visitors, suggesting directions or routes, pointing people towards less easily found work.

To (very) briefly mention some of the other pieces shown, there was a double-bed sheet punningly embroidered in human hair by Sara Bomans, Remco Roes’ eruption of silk-screened paper and clamps that swirled out of a wardrobe and around the bed, an arcade game by David Blandy in the main bar, and a performanceand installation by Olga Boldyreff in the bar, and three performances on the Saturday evening by Sylvia Rimat, Nicola Canavan, and Hannah Pollard.

Distributed across bedrooms on five floors and several other spaces the project was at points unwieldy, and difficult to navigate in time or space. The gaps between parts sagged, and there was not enough signposting to hold us to our purposes. The information available via the project’s blog or Facebook was minimal, mostly giving an overall duration and some indication of who was presenting work. There were discussion and talk events as part of the programme, and the evening of Saturday was given over to a series of performance works presented in the hotel ballroom. The print materials available on site listed the artists and gave some indication of where and when different parts might be seen. There were short texts placed under each artists’ name, and these mixed artist statements, texts to accompany the particular works shown, and passages that felt like excerpts from a website or a longer text. This material in varied style and intention gave some context for the works and makers.

There were talks and communal meals that offered an opportunity to discuss aspects of the work and the context in more detail. There was also a guided walk by Jason Hirons, and a VJ session to close the Saturday evening. I did not see everything that was to be seen, to be able to would almost have required being resident in the hotel for the two days. Part of the curators’ intention may have been to present something beyond full apprehension, ungraspable as a whole, too much to take in. Like the hotel itself, different styles, different eras, different markets, occupying overlapping and intersecting spaces and times. Platform P @ The Duke was an ambitious and exciting undertaking from Doove and White. They brought a lot of varied work together in an unusual setting and offered some minimal framing to allow the work to ‘speak for itself’. In ways a tighter programming with someone clearly in an MC role, and some more consideration of the information provided, would have made better use of the great location, and held the audience more securely in the event. 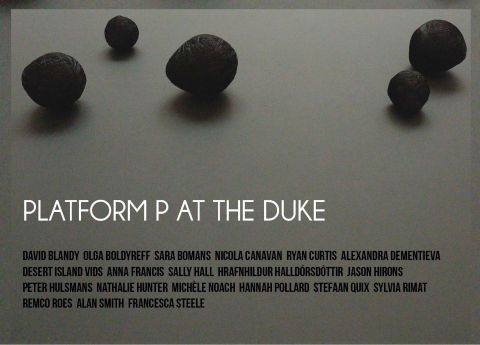