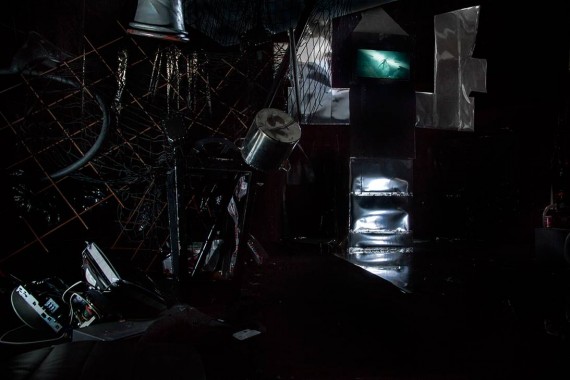 A group of young men are targeting a solid industrial street bench. This is a ledge jam competition – artist Keith Harrison has invited skaters to attempt to ‘transform his bench sculpture with their tricks’ in this collaborative performance at Prime Skatepark, Plymouth as part of the Crafts Council’s touring Acts of Making Festival.

Recently arrived in the city, this touring commission-based festival has been incorporated into the inaugural Plymouth Art Weekender programme of open studios, artist-led and institutional exhibitions, happenings and performances – a festival within a festival if you like.

Harrison’s project is very much an event for the skater community and being a bystander adds another dimension to the experience. No longer in the safe position that arts audience member usually affords, I am physically aware of being an awkward outsider to this scene. Within this space between celebratory community and formal observer, the competition becomes an absurd form of product testing, the skaters are free to mount the street furniture in a game of future vandal-proofing.

The next day I encounter the artist, Keith Harrison, in a different environment, causing minor artwork-induced havoc within his studio group exhibition at Karst. His industrial clay-covered light bulb wreath has been altering its material qualities as it heats, spitting clay and setting off the fire alarm. Harrison’s work is about the incongruous use of materials and experiences in an imperfect quest for permanent change. The irreverent humour running through his experiments applies as much to his limited editions as to his publicly commissioned experiences.

Editions is an exhibition of works by the eight Karst studio holders – one per artist. Each artist has exhibited their work on the door of their space, creating a whitewashed corridor gallery, that neatly conceals the studio areas behind them. These include Clare Thornton’s beautiful constructivist plywood sculptures – that are appropriately functional as a croquet set, Rosie King’s witty Bench Spotting Guide of Plymouth benches and Donna Howard’s beautifully presented property development disclaimer.

I take a bus out to the architecturally impressive Royal William Yard, a former 19th century military building and Royal Navy depot, that has been transformed by developers into a waterfront hub. Apart from a couple of musicians playing on a cafe terrace, I find no trace of a promised street party.

Within the yard, artist collective Convergence have navigated the corporate indoor space of the Mills Bakery Atrium, their interest in site-specifity coming to the fore as several works feel almost built into the space.

Laura Hopes’ projection-installation Breath, is spherically-contained within a dish that seems so part of the architectural fabric it is hard to imagine that it was ever shown elsewhere. Rachael Allain’s photographs and video, documenting the bay directly behind the yard, are sited and framed in such a way that the inner glass windows within the space unwittingly act as a material extension of the pieces.

Juliet Middleton-Batts has re-appropriated objects that she has found around the area, using them as physical hosts for photographic presentation and projection. The artists’ works successfully manage the space, but I leave feeling that they would still benefit from an aesthetically kinder space.

There are several more curatorially-considered group exhibitions spread across Plymouth, between the open studios, art markets and institutional shows. The four artists of Pipe Studios have also chosen to avoid the open studios format, turning their cavernous tunnel into an exhibition space for the weekend, with a number of choice works by each of the artists, whilst Karen Roulstone and Sarah Chapman’s joint exhibition at The Alamo Project creates a thoughtful and vibrant dialogue between the two artists works.

A shared sensibility is highlighted by the interwoven display of each artists works. Chapman’s polaroids and (often found) photographs, abruptly distorted with enamel or acrylic, and Roulstone’s oil glazes on wood each manifest an intuitive simplicity, the result of adept transformational markings.

Plymouth Art Centre has a strong selection of projects. There’s an underlying consideration about how the audience navigates the exhibition space throughout. Tim Etchells backs the viewer into an impossible place. “Move back”, “Get back”, Step back”, “Step away” – four standing speakers face each other, slightly off centre within the exhibition space, a male voice issuing orders. This could be an internal conflict within the mind of this invisible person, however it feels like a direct command to the audience. If literally followed to conclusion, the viewer could only hope to leave one speaker still standing.

The anger and frustration, albeit without the aggression, follow me all the way to the Upstairs Gallery, where Ghosts 1-12 further channels the sentiments into a raging message. ‘They taught their children that the poor were ghosts and did not exist’ is scrawled in black acrylic on seven sheets of paper, lightly pinned to the wall of the gallery, alongside abstracted images – the reverse imprints of these messages. In turn, Mirror Pieces continues the confusion and catch 22 situation of the ground floor audio piece. Six multicoloured neon signs, ‘optical illusions’, ‘political delusions’, ‘poetical confusions’ are paired and mirrored with each other – this celebratory vision seems to announce to the viewer the burden of their own interpretations.

In the PAC Home Space, Emily Pope and Francesca Hawkesworth have found a unique way of exhibiting www.theoctopuswasnakedbutthecrabwasdressed.com – a web-based curatorial project – as tablets embedded atop two slim plinths. Alongside 14 other artists, they have drawn on Facebook’s ceaseless supply of images and advertisements to create a series of Viral videos and GIFs that appropriate and reframe the messaging of these online Stickers. From pornographic images, cartoon caricatures to social media aphorisms, these anonymously presented artworks find humorous one-liners to respond to the notion of being watched and data mined online.’Life is futile – LOL!’.

Next door, the Back in 5 Minutes Squad have transformed the centre’s artist-in-residence studio into an immersive apocalyptic experience. Although I have come prepared, I am almost wrong footed by their hand written Back in 5 Minutes (Squad) sign at the entrance. Bonkers and bombastic, the squad have pulled out all the stops to create this exhilarating futuristic shipwreck.

Rubber tubes, metal pans, fishnet, metal cones, reflective mirror board become more than the sum of their parts as refrains from Roxette’s ‘I’ll always get by on my own’ surround the viewer wandering this black plastic wilderness. A totemic structure broadcasts sequences from blockbuster films constructing a narrative of hope, survival and eventual doom.

In the pleasure of this immersive experience it is easy to forget ‘that the future has been lost to us’ as we bear witness to these romantic foretellngs. But then, would it really be so bad if those surveying the remnants of our civilisation can only make sense of our legacy through power ballads and blockbuster action movies?

Elsewhere, Salon at St Saviours has an informality to its curation. Several artist members of PAC Home present experimental new works in St Saviours Hall, a former Sunday School and current home to the library of the late artist Robert Lenkiewicz.

Loose sheets from Rose King’s hand-written narrative of a family legacy that has gradually been lost to rising house prices and cliff erosion, is piled atop a stack of cardboard boxes. This wonky lecturn is aptly suited to the anonymous narrator, who could be real or fictional, embellishing or rewriting history for all the reader knows.

Adrian Lee’s appropriated fire sign blinks high above at the far end of the wall – 300 LED light bulbs creating a fiery symbol that could be part of the building’s existing furnishings. Lee is interested in the absurdities of legalese and during what appears to be a performance interval, we hear ghostly sounds within the room – the artist reading out six wildly varying disclaimers found on psychics’ websites.

Mo Bottomley and friends is a sprawling, exultory experience, far more entertaining and surprising than the séance that is advertised. ‘There was a fire here’ drones his voice to electronic keyboard. Lee’s fire escape sign blinks ominously above. Bottomley in comely dress presents a ritualistic variety show that shifts gears from solemn hymn to farcical slapstick – from posing in a negligee in front of a mirror to adorning impressive claws in a lobster ballet.

This wide-ranging performance has many potential beginnings and endings, with friends appearing on stage for spoken word and live music interludes – at times as if clearing up.

As guest after guest arrives, performs and leaves the stage, Bottomley, almost gracefully moves in and out of the picture, seemlessly joining the performer when he wishes, like a deranged Jools Holland in drag. This is however, far from threatening. With Robert Lenkewicz works on the wall behind, for a moment it is as if we are looking into someone’s front room as they jam with friends. It feels as if this is the real introduction to Plymouth’s art scene.