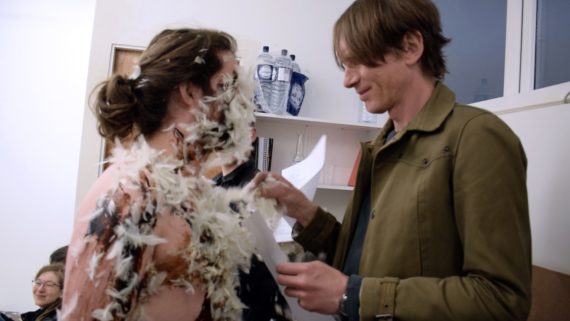 History as a running material

A woman wearing a white dress, heavy set make-up and a red bow in her hair, elegant, a little overdressed, removes her shoes and sits at a table. The table is covered in a white cotton cloth, the neat horizontal markings suggestive of a folding ritual after a holy communion , the three objects; white paint, cotton wool and ribbon allude to a contemporary trinity. The woman dips her hand into the clay like paint feeling the texture through her fingers. She applies the paint to her face, with each application she loses herself to the material, the actions encouraged by strange sounds. The glaggy material starts to transform the face, gradually demising the doll like persona. Two hands come across the face revealing a sinister smile as the red smears into her cheeks. The actions are both grotesque and provocative, the audience is repelled and drawn in simultaneously. Whilst shifting presences, she chews cotton wool balls. As the sound track next to her reveals images of what appears to be 18th century styled angels with crude carboard wings being splattered by blood. The multiple images crosshatch themes and disturbs the visuals of the transition.  She stands up,  back towards the audience and pull down the zip of her dress. She takes it off. Then her underwear lifting her arms in a crooked crucifix, revealing her hairy armpits, with a twisted grin the clown removes the red ribbon holding her hair and ties this around her neck as she pulls the loop tight, the audience are pulled out of their viewing position and feel the tension of the pull, eventually she makes a bow. Her eyes stream, saliva falls, rupturing the grotesque clown.  The clown grins whilst tears stream over the mound of cotton wool balls whilst fishing for the knife that has dropped on the floor, upon finding the knife she uses her toes to pick it up, a feeling of dread is felt from the crowd as the knife is brought to her hand she cuts the red ribbon and ties the already chewed cotton wool balls into a present she puts this into her mouth a fleeting gag, she ties the present. The clown walks along the wall, it supports her upright stepping between props she hands the present to an audience member, they embrace as she reveals human qualities, it is temporarily accepted. In a wobbly state she collects her clothes and retreats through a door.

As an audience member Lawson starts to write onto a blood stained canvas, the drawing appears child-like,  each mark reveals sinister adult content. We (the audience)are faced all at once with a child sized stick figure with a grossly enlarged phallic, with stick hair on two small balls, gendering the figure as man.  The performance was quick and intuitive yet we were left with the stain of male dominated power and the powerless child. The image was left as a residue in the space.  Michael Bryan later metaphorically  transformed the adult contents to a blood stained sheet resembling birth.

Woodward dressed in a black hoody, blue top and black jeans.  As he takes off his top, he is no longer recognizable as part of the audience and hands out text to participates. As the half naked man he starts shouting out a self made language, this seemed to shake the viewer out of the resting place that the break had provided. At once he became a mad man, smearing black treacle onto his body, the act appears masochistic, he becomes a spectacle , the substance appears like oil, as he pulls feathers out of a white bag that faintly resembled a cushion case. As he throws feathers onto his body, he mouths out unknown words. We become aware of a man that has lost control, this unnerves the audience into a state of internal madness which was only heightened by the white gallery space. At points the gallery space became a padded cell where the audience could no longer contain themselves. Laughter was shameful but at the same time unavoidable. As the mad man found a pace, he moves ritualistically throwing feathers at members of the audience whilst shouting angry unknown words, which provokes a natural urge to shout back and throw feathers at the mad man. He then unexpectedly pulls the sack over his head and finds the table where the red ribbon is held from Starkey’s previous piece and  wraps the ribbon around the sack. Reinforcing the ribbon as a restraint tool.  Resembling a tar and feathering humiliation, this was no performance but a live action piece. Where I could no longer decipher on a singular ‘artist’. Only after the event I questioned his madness. Maybe he was always in control?

Michael Bryan’s crawling piece was originally banned in 2014 part of “UNIT”, Camberwell’s 2nd year group exhibition for fine art courses (BA Drawing, Photography, Sculpture, Painting), CGP and Dilston Grove Galleries.
A Black body manoeuvres through a feathered, white space, as he started to crouch his active body revealed a naked brown back, where the artist was unable to cover himself.  As his black hands, legs and face delicately grapple the floor, his painted black arms become wings, attempting to find hard ground, finger tips discovering surroundings like a child. Crawling slowly feeling the feathers between his fingers and the floor, the movements revealed a duo presence of a painted black man that had almost lost function and a bird-like child. Another man covered in what appears to be tar and feathers, shouting unknown words placed feathers on the crawling man’s naked back, he fleetingly becomes an angel. As he crawls, the man lets go and surrenders his feathers face pressed against the floor. The audience captivated as the two performances interlock fleetingly. There is a silent presence in the room. I feel myself afraid to breathe as I don’t want to inflict noise. The naked man drags himself and presses his hands into blood stained cotton sheet, gently creating a ball like shape akin to his own body. Bryan transforms what was previously a canvas containing adult content and aggressive blood spatter into a womb. Bryan releases the ball of fabric/ bird and returns to his child self, the child curls up becoming foetal, innocent and unmarked.  Bryan pulls himself away from the space leaving Black residue on the wall. The performance was simultaneously vulnerable and empowering.

‘The body reflects upon nature repeating the movements and patterns found within oneself.’

We asked Michael Bryan why he thought the piece might have been banned in 2014?

In your opinion why was your crawling piece banned from UNIT in 2014?

My opinion: A combination of things…

1) the previous year a female student got away with a performance that few people realized she was topless. There was a backlash against that.
2) they were very scared of the sight of a naked black man disrupting the opening night. 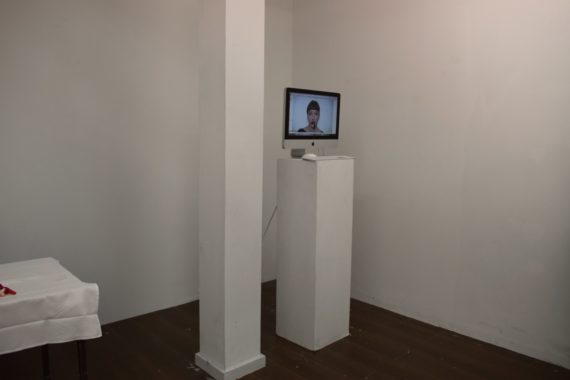 Ramus was seen through a screen, the screen became a mirror. As she applied lipstick, over and over the lips became a dissociated object, an automatous form. Ramus started to lose sense of self, and gradually became a puppet to what were her own action, the doll like red lips become sexualized, as the lipstick turns phallic. The lips grow rubber-like until she is left with a gaping hole. The composition is minimalistic yet the transformation of the lips become a bizarre perverse form, some thing that could be found in Bataille’s Story of the Eye. As the lips transform the audience become aware of a monstrous counterimage and feed into the screen whilst becoming increasingly aware of their own faces.

It’s always slightly unnerving to be present in a white cube space, not so much as an ethnically “marked” body as spectator, but the sheer whiteness of the gallery seems to uncomfortably engulf and neutralize whatever power a radically created art piece had outside of it. Which is why the performance by Emma Starkey is an unnerving experience, because of the willingness to accept and embrace the whiteness of the gallery space within and without.

The performance begins with Starkey sat in front of a table with three objects neatly placed. Of these three objects, the face paint is the first to be used, Starkey applying with at first messy, then sensual strokes, slowly disappearing in the process. A pile of cotton wool balls is the second item on the table, this time Starkey chews one ball at a time, saliva leaking from her mouth and occasionally generating a retching reflex. The consumption and wearing of two brightly white objects, accompanied by the stuttering of a digitally slowed-down video displayed alongside the table became a repulsive sight to see.

Punctuating her white facial mask is the third object; a roll of red ribbon tape, slowly unveiled and sensually tied around her neck, the red mirroring the images of blood shown in the video. The performance becomes increasing visceral as Starkey proceeds to shed her white clothing. Standing up, her newly marked face contrasts with the rest of her nude body, causing an disturbing dichotomy of white as object and subject.

The concept of “alien” bodies, present in an unmarked, White space was recently discussed in the book space invaders (2003), however author Nirmal Puwar made references to non-White, non-male bodies. The striking thing about Starkey’s performance is that she has seemingly achieved the very same effect utilising the colour white. Out of the three objects used, the face paint is significant, because we see a young woman, racially identified in society as White covering her face with bright white paint, disappearing in the process.

Of the books recently written about the concept of whiteness, only two (Unmarked by Peggy Phelan and White by Richard Dyer) attempt to uncover and unpack its qualities, possibly due ito its default societal status it seems to avoid analysis. Seeing a white female artist doing the same within her performances is an unsettling experience, because she dares to question the very foundations of Western society, one in which “whiteness” is seen as the pinnacle of existence.

A big thank-you to Five Years whom hosted the event!