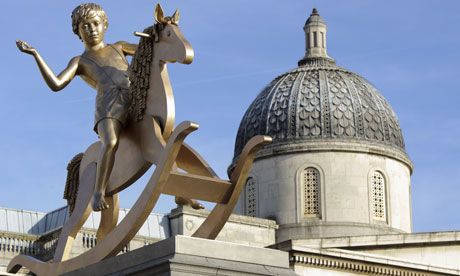 This year, Trafalgar Square’s Fourth Plinth was home to Michael Elmgreen and Ingar Dragset’s bronze statue of a young boy astride a rocking horse entitled PowerlessStructures fig 101. The prestigious commission physically occupies a high-profile location and attracts a substantial amount of national and international attention and artistic kudos. Although the Fourth Plinth is termed ‘Public art’ we must remember that there is no such thing as a singular public. The Fourth Plinth’s ambitious mission is to appeal to a general non-art specific audience whilst showcasing innovative Contemporary art with an engaging discourse. I believe Powerless Structures was conceived with many subtle layers for flexible interpretations in order to appeal to different audiences and fulfil different political agendas. Although the media is inundated with casual discussion surrounding Fourth Plinth, I will instead question why certain themes in Powerless Structures are emphasised whilst other themes are overlooked. My analysis will move beyond the usual discourse, to explore the artist’s driving force behind creating the statue. I will argue that beneath the gleaming surface the artists question difficult topics including, masculinity, social class, and institutional critique.

When quintessential English actress and OBE holder, Joanna Lumley, unveiledPowerless Structures, she described the work as “joyful” “adorable” and “completely unthreatening.” She recognised the instantaneous emotive impact of the heart-warming image. I agree that this instantaneous emotion is present within Powerless Structures, and in an interview Elmgreen concurs that the audience in Trafalgar Square “are not asking to have an art experience as such and you need to respect that in a certain way…we chose to speak with a lower, more poetic voice and chose to show something more fragile.” He adds, “one of the biggest dangers in public is to show you are vulnerable, to cry or show too much affection.” Although it is subtle, there is a hint of subversion through using an unfamiliarly personal tone in a culture entrenched in pushy advertising, passive aggressiveness and hostility on public transport. The boy’s vulnerability is heightened by its contrast to public expectations – it does not depict a stern experienced man like most bronze statues. The boys head faces down to meet the eyes of pedestrians whereas many memorial statues have figures staring intensely into the future. Through creating a sculpture that does not conform to our expectations it in fact emphasises the conventions of bronze statues and the city environment.

Elmgreen and Dragset are not opposed to creating an artwork that has a universal appeal- in fact they enforce this interpretation of their work. In a statement to the BBC artists said the purpose of the statue is “to consider the less spectacular events in their lives which are often the most important.” This elevates the everyday to a privileged place within society and promotes an idyllic view of London where we are equals. It is comparable to Gormley’s One and Other (which I was lucky enough to be part of) where a cross-section of ‘ordinary’ people represent contemporary London through using the Fourth Plinth as a stage for creativity and self-expression. I do not believe the artists driving force was to create something “adorable” and “unspectacular” – I believe this aspect has been accentuated to present a positive image of London, and to easily communicate the statues themes to a broad non-art audience. Of course this is the type of statement that appeases the general public and satisfies short press articles; however it is only a convenient façade for a deeper enquiry.

My favourite interpretation of Powerless Structures was by Boris Johnson who said, “I think it may be a very subtle reference to the Olympic year and the fact that Team GB is very successful in Olympic sports that involve sitting down such as sailing and rowing.” (The Olympians do more than just sit down Boris!) The statue featured in footage of the Olympics and it loosely relates equestrian sports, yet the boy does not appear to be competing. Interestingly, if you look at the prototype model of Powerless Structure the boy is looking ahead with a look of determination and his arm is poised to make a powerful gesture, yet in the finished statue the boy looks down condescendingly whilst he appears to give a royal wave. Is it possible that Powerless Structure was chosen as the 2012 icon because Boris and the FRCG envisioned a pro-olympic icon, yet through a few subtle changes Elmgreen and Dragset were able to subvert this idea discreetly? In the finished statue, I am more inclined to believe Powerless Structures is a reference to equestrian statues rather than sporting events, and the Olympic interpretation seems uncomfortably forced.

Elmgreen and Dragset’s Powerless Structure fig 101 is more than just an endearing playful scene or a patriotic symbol, which is apparent through examining the artist’s oeuvre. Since the artists began collaborating in 1995 they created a range of installations, performances and sculptures. Their installations explore institutional critique through disrupting visitor expectations by changing familiar environments- for example they transformed Victoria Miro gallery into a nightclub in The Mirror, at Venice Biennale a gallery space transformed into a scene of a crime for their work Death of a Collector, and Prada Marfa is a boutique made in the Texas dessert. The subversive humour reminds me of Maurrizo Cattelan gallery pranks, such as the “be back soon” sign constantly hung on the gallery door to stop people seeing his exhibition, or when he copied Carsten HÃ¶ller’s exhibition to create a perfect replica of the exhibition hung at the gallery next door.* Both artists rely on public reactions to challenge accepted modes of viewing. In this context, it is unsurprising that there is more to Powerless Structure chocolate box art.

In an interview at the unveiling, Joanna Lumley commented that the sculpture is entitled ‘Powerless Structure, Fig 101’ because the boy is powerless compared to powerful military figures. Although this is a valid explanation, Powerless Structures, Fig 101 is actually part of a series of works, Powerless Structures, that Elmgreen and Dragset have been developing since 1997. The works in the series vary in style and scale, although they are often architectural, understated, and ulitise the language of Minimalism. (see http://artnews.org/elmgreendragset/?s=2#13) Works in the series are about overturning the gallery environment (often physically), seeing potential in small or subtle things, and turning banal objects into powerful ideas. The results are humorous but critical.

The title Powerless Structure evolved from the artists misreading of Focault, and the concept that “structures impose no power, only the way we deal with them.” Powerless Structures, Fig 101 uses the convention of bronze memorial statue to depict a young boy usually deemed powerless. The act of giving power to objects is comparable to art institutions, and in this case, if the sculpture was not selected by the commissioning group to be placed on a plinth, then it would not be an object of power. This concept raises questions such as: Why are figures made into statues? What qualities to we look for in a hero worthy of a statue? How do we relate to these statues as pedestrians? (As I have already explored, Powerless Structure illustrates the importance of patriotism and positive morale in statues). Interestingly the Fourth Plinth was built to display a bronze equestrian statue of King William IV, but it was never completed due to insufficient funds.

Let us return to the interpretation I presented earlier that Powerless Structures hints at being about equality. Would these Elmgreen and Dragset really be content creating an artwork that ignores the power structures that forms civilisation? I believe the artists deal with the issue of class division during an economic crisis, however it is not made explicit for obvious political reasons. The boy is neatly dressed and there is a smug smile of superiority upon his lips whilst he gives the royal wave to pedestrians. His curly hair gives the statue a classical appearance, as curls were traditionally regarded as a symbol of vitality and good health in youth. In relation to youth, Elmgreen said “The boy in the statue is at an age where he does not have too many worries yet… society today is filled with fear. Everyone worries about the global economy, global warming… It is very depressing if the current generation is brought up in a climate where they do not believe in progress and things getting better. It is important for us to get rid of some of that fear and be more hopeful about what will come.” But will this boy’s dreams be dashed? Elmgreen and Dragset present an upper-class boy without a worry in world, and with a confident exterior suggesting high self-expectations. To me, this represents a society where the rich have an advantaged start in life, especially with increases in tuition fees and through the “who you know” method of finding employment. Maybe my interpretation is based on my own cynicism, but I don’t think the boy will ever be overly concerned with the global economy or global warming as many of us do. It is revealing that he is not make-believing that he is a cowboy involved in fast-paced action and struggling through life, but rather that he is pretending to be high-rank military man or royalty where he is admired. I feel that the prototype model does enforce the statement, “rather than dealing with topics of victory or defeat, [Powerless Structure] honours the everyday battles of growing up,” which was written on a text panel beside the model, but this is lost in the finished sculpture when youthfulness and determination is stripped from the boy. I believe it somewhat references Rococo art where upper-class children are small adults, for example, in James Ward, The Rocking Horse, c.1793, the girl’s dress stays pristine white through her restrained behaviour.

The issue of masculinity is brought to question in Powerless Structures, as the figure is a boy with a feminine stance. The boy wears short-shorts with braces, he has a feeble wrist gesture and he is thrusting forward. Elmgreen and Dragset are lovers as well as art collaborators, and their homosexuality is reflected in works such as Go Go Go (2005) a nightclub pole next to a bucket of dirty water, and Gay Marriage (2010) a Duchamp parody where two urinals are linked by plumbing. Their work reminded me of Felix Gonzalez-Torres, as both artists express their homosexuality in a way that is not shocking but instead “normalises” their lifestyle to the public. Both artists use the language of minimalism but conversely create subjective and emotional works. In an interview between Elmgreen and Dragset and Hans Ulbrich Obrist ‘Performative Constructions’ (http://www.nicolaiwallner.com/texts.php?action=details&id=64) Elmgreen explains how he met Gonzalez-Torres, and how they shared views about using Minimalism to be accepted into the canon, but then infiltrating high-art with issues of homosexuality. This ‘campness’ was not obvious in the prototype model I mentioned earlier. This boy seems self-indulgent, at ease, and maybe performing to spectators, whereas the original model presented the boy as determined and maybe more aggressive. Was this a conscious decision to infiltrate the plinth with a suggestion of homosexuality? This questions the role of statues in presenting archetypal heterosexual men who are recognised for manly things such as leadership and military achievements.

You may be wondering, if my interpretations have some truth behind them, why would the artists allow their work to be interpreted as chocolate box art? I think their ideas coincide with Daniel Buren, who insists that you can only question the frame from inside the frame. Powerless Structure fulfils the Fourth Plinths aim to appeal to the general public, and art geeks like myself will enjoy digging deeper.