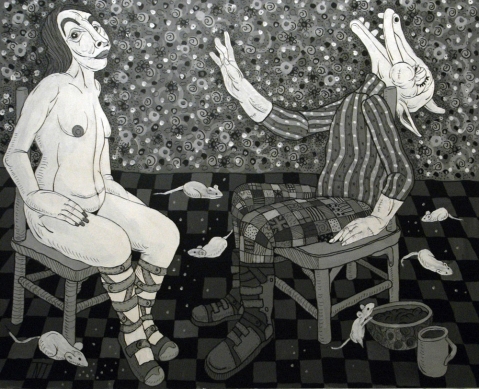 “who can I tell my private nightmares to, if I can't tell them to you?” asks Samuel Beckett, and this forms the title and context of Nazir Tanbouli's first solo show in London. The Egyptian-born artist has assembled a monochrome universe of domestic disquiet and disfunctionality, in a series of six large paintings and twelve pencil drawings.

“Metamorphoses” the painting series, depicts domestic encounters as an unsettling place where the man's wild natural instinct comes up against the lure of comfort and domesticity. Fabulously patterned crocodiles stalk chintzy living-rooms; a man with the head of a braying donkey laughs, pleased with himself, while his female companion looks knowingly out at the viewer. The scenes are intricately painted, deliberately ornamental and decorative, yet are totally without colour. Black, white, and shades of grey.

The drawing series “Private Nightmares”, while at first seemingly smaller and tamer, are even more subversive of the idea of “home comforts.” A post-coital couple lie half-asleep on comfy cushions as half a dozen rats gambol around them. A crocodile-headed man is tortured by two females; later we see the same man entertaining a naked woman on his lap; still later he's on his funeral bed. Encounters with feral animals, monstrous women, dragons. Private nightmares indeed! And then we get the central image, the core of the story: the artist, without a doubt, standing on the body of the dead dragon, again in a domestic interior, sword in hand, with the caption “one of us had to die”. Jodorowsky meets Los Caprichos, drawn in the finest nuances of Italianate pencil.

Perhaps best known in fact for his assertive murals, as recently seen in Milton Keynes Contemporary's Whitewall space, this exhibition shows us another side of Tanbouli: narrative work, fine line drawing, clever shading, subtlety of tone married to extremity of expression.

Whether in the murals, or in these deceptively quieter works, Tanbouli's work performs an excavation on the brain, releasing its monsters into the light of day.