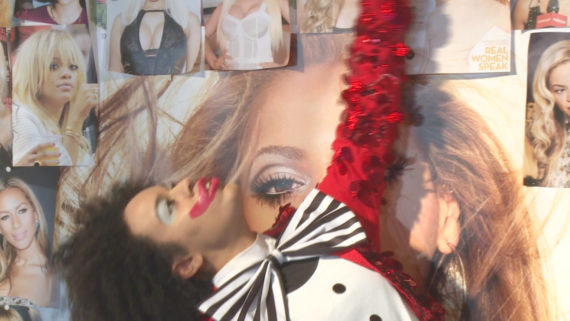 At MOCA London’s ‘Focus Zoom’ event, 11th July 2020, director of the gallery, Michael Petry introduced the contributing artists: Quilla Constance, Anne-Marie Creamer, Fernando Illezca, Jon- Michael Parry and Sheldon Scott, inviting them, and the on-line audience, to consider how their artworks might reclaim or contest the various histories (usually ‘fake’ white histories) and the (majoritarian) narratives we are led to believe as ‘truth’. This event provided an opportunity, especially in the current Black Lives Matter context to enter into a conversation which might provoke change; to attend to the importance of artworks not just to give alternative narratives but how, through an emotional bodily response, an audience might be able to situate their own experience for other possible narratives, especially to attend to issues of whiteness.

Quilla Constance introduced her video ‘Pukijam’ (2015) as an articulation of the constant activation between her black and white heritage; how her biracial subject position might enable more liberating modes of being.

In ‘Pukijam’ an exaggerated and erotic female sexuality is intercut with images of black female media identities and trappings of British colonial culture including the pernicious image of golliwog. The classic contortionist act as rag doll – the golliwog act – is performed to a relentless beat accompanied by sub linguistic gobbledygook vocals – as scatting – from Quilla Constance. This so-called cherished (lovable even) cultural artefact (and jam mascot) of a white western public of previous generations (defending it as nostalgic): The golliwog, a destructive instance of racism, is clearly a reminder of Britain’s racist colonial past (continuing into the present). An insidious feature of this image is that it is intended for consumption by children (white children), as part of their socialization into the adult world of race relations. The golliwog is performed – re-performed (and experienced) in this artwork as a historical and contemporary trauma; the threatening ‘other’ as harmless – as lovable – is now put into question. In ‘Pukijam’ Quilla Constance’s re-enactments – changing her black flat pumps for red high heels in order to pole dance – cuts into other shifting locations and times: colonial interior, tea time, artists’ studio, with a montage of other significant objects, pineapples, afro hair combs, fried chicken, cakes, in an endless repetitive flow. 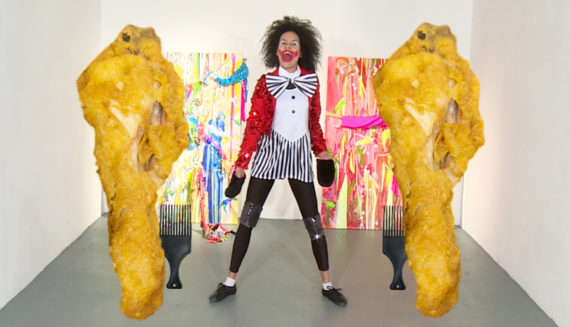 The cakewalk – to which this performance makes reference – as I understand it, originated on the barbaric Plantation. It involved an exaggerated mimicry by the slaves of the dress and manners of the white plantation owners in their large houses. Grotesque in its exaggerated mimicry, the cakewalk was a highly skilled and controlled parade often accompanied by what has been described as referring to the polyrhythmic or cross-rhythmic character of African music. At the time, the cakewalk was a source of amusement in the dominant white culture – and more recently as Minstrel shows – enjoyed as a spectacle by those white folk who missed the point of its subversive intentions: to mock the affectations of the slave-owners. 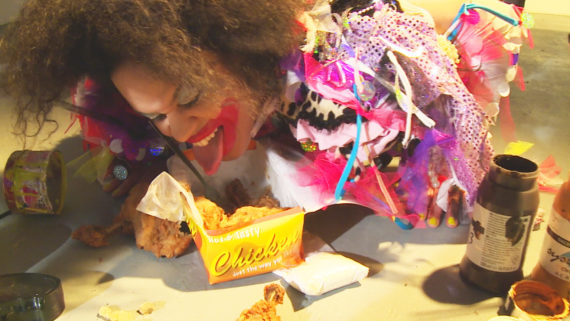 The amusement was possibly similar to that of seeing a parrot mimic human language, or the pleasure of seeing an animal imitate human behaviour – as though those creatures of a so-called lower species might actually love and revere their owners. It parodies a concept of the human as mirrored by the ‘other’ – as reflection. QC’s over-identificatory strategy (1) here exposes this shameful hierarchisation of colonial power structures.

Quilla Constance accompanies her movements with a-rhythmic, pre-lingual utterances. Pre-linguistic babble has also been advocated by Feminist theory as one of the options open to women – a refusal of the linguistic order which fixes women in a relation to lack. Julia Kristeva’s Revolution In Poetic Language (2) describes the semiotic (the pre-linguistic) as an eruption into the Symbolic Order as a necessary (though dangerous) rhythmic flow which is constantly disrupting notions of truth and fixity, (with a warning to women as an especially dangerous space to occupy). Quilla Constance, in re-enacting the mimetic act, now exposes these repressive structures not as fixed truths but as mere performances. This is a repetition which does not return us to the traumatic locations and identities which inscribe us through our various namings: those injurious categories cited by Judith Butler (3). It is a repetition which is truly creative – it allows for a re-location outside of this debilitating framework. The cakewalk in its exaggerated mimicry did not intend to re-affirm the dominant nature of the mannerisms that it copied; it did not seek to emulate and confirm the traumatic hierarchical relationship of master and slave but rather can be understood as exposing the constructed nature of identity in the first place.

The intention for this artwork is to re-present such accounts without returning us to this traumatic event; Quilla Constance is repeating these insults in a new register–she shifts the account of this traumatic othering to one of a creative re-location which refuses to be consumed as subjugated to the majoritarian location: as other, as minoritarian.

In acting out the prescribed role of the minoritarian these artworks refuse the dualistic hierarchy of this cultural heritage. These re-enactments I argue, serve to displace the concerns of identity politics – that of the subject: an insistence on a subject’s identity, experience, feelings, affects. Agency – as proliferations of subject positions (often hyphenated as class, race, gender and sexually specific) ignores the question of what is actually beyond the subject’s control.

The issue now is not to rely on how I am recognized – that which names me – but rather how to make new possibilities through action. Quilla Constance then could be understood as a presentation of our differences as vehicles for inventions of the new and could offer transformative possibilities that move beyond the goals of recognition – affirming our own positions and our own experiences – by moving into unknown territories beyond humanist objectives. 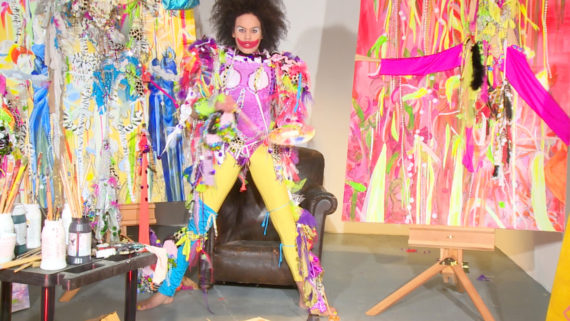 ‘Pukijam’ then raises the question of how to address identities that are rendered more complex through their intersectionality, their interlocking oppressions. The work proposes to undermine all notions of cohesion, unities and identities; to dissolve identity in forms of difference rather than pursuing utopian goals of sameness – the humanist perspective. This is not to overcome race, sex and class and other differences through the creation of or production of a universal term by which they can be equalized or neutralized – the humanist goal – as all the same. Sameness becomes an unrealistic and undesirable goal. We are presented with a possibility for a future as yet to be enacted – where past and present privileges are not repeated by merely shifting power and redistributing what we have.

Here we have an incredibly affirmative strategy to address debilitating operations of power. It is a strategy which contests the patriarchal as racist and Eurocentric. It moves beyond the goals of identity politics which seek to affirm what we are and what we know. Golliwogs, pole dancers, exaggerated female sexuality, pineapples, afro hair combs, cakes, glamour models, wigs, fried chicken, are all thrown in as cultural signifiers which shift and dislocate in a repetitive montage which undercuts any fixed meaning in this destabilization of identity.

Quilla Constance (abbreviated to QC) is clearly intent on addressing social and political problems. In this constant flow of pleasurable dis-identification – we come to recognize what feminism and gender theories have long asserted: the performative nature of any notion of identity. Quilla Constance’s performances are not traumatic essentialist re-assemblages of identities as fixed truths but rather, they put into motion the unfixed and prescribed nature of all forms of identity. 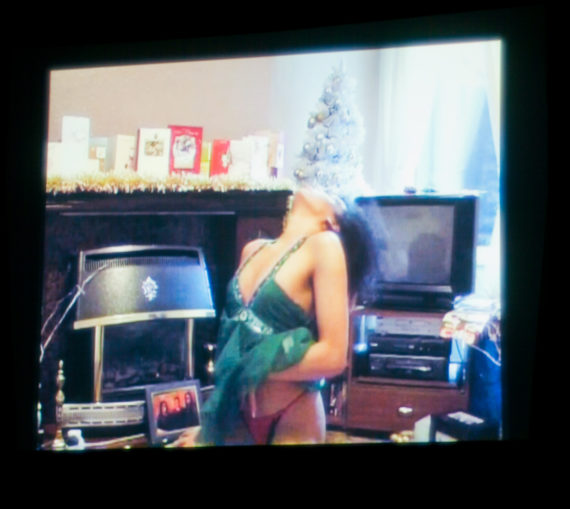 Quilla Constance is the persona of artist, Jennifer Allen, whose earlier video ‘Happy Christmas Mom & Dad’ (2006), features Allen making a seductive Christmas presentation of herself to her incredulous parents. For me this sets the scene for her intentions as an artist. Here we are presented with a daughter who refuses the taboos and restrictions/repressions bestowed on female identity – and she starts with its location: in the first relation – to the father and mother. (Predictably), the mother is outraged at the inappropriate display of her daughter’s sexuality while the father becomes (problematically) seduced by the spectacle of his daughter’s refusal of the incest taboo – the Oedipal. Allen’s unabashed exploration (of her own erotic potential), which might take place in the girl’s bedroom, is now taken into the living room as a shocking gift for her parents. The dutiful daughter, in a celebratory display of her sexuality, refuses the repression now enacted as hysterical performance. This is now dangerous territory – that which has necessitated the repression: cultural, physical and psychological. It is territory Quilla Constance aka Jennifer Allen continues to explore in her practice.

So, we can see that Allen is clearly intent on a blatant disavowal of the so-called Law of the Father, the Symbolic Order, the repressive Eurocentric and phallocentric system into which all subjects are inscribed. This blatant disavowal is extended in her performances/ enactments as Quilla Constance. This over-identificatory strategy as a repeating of these categories, these traumatic namings, these insults, makes other relations possible – they offer political and transformative creative new becomings (the Deleuzian concept) that overturn and go beyond that which merely perpetuates the system – a system which claims to represent all others.

Such practices, as sites and strategies for interventions to produce change, to produce new knowledge, continue to critique and invent alternatives to colonial, patriarchal systems and address new types of subjectivity. This is a practice which would undo all stabilities with the potential for change. Patriarchy and racism are rife but they are not fixed structures nor systems, but patterns and models that are imposed to create some kind of order – they are not some form of latent order or a cohesive system in the world. We can invent new patterns. Identity can shift from an idea of what we are: the multiple, overlapping categories that make us into subjects. Rather, we are what we do and what we make – what we might generate (4) – with the intention to undo false damaging hierarchies.

1. Over-identification as a strategy was first defined by Slavoj Žižek in ‘Why Are Laibach and NSK Not Fascists?’ 1993

Note: Quilla Constance’s aka Jennifer Allen’s video ‘Happy Christmas Mom & Dad’ (2006) is held in various private collections and is not available online. However, the video can be viewed on request.

Dr Mo Throp is a practising artist, curator, writer and researcher in the CCW Graduate School where she supervises a number of PhD students. She was BA Fine Art Course Director at Chelsea College of Arts until 2011 and was previously critical theory tutor on the MA Fine Art degree at Goldsmiths. Mo studied sculpture at St Martin’s College of Art followed by an MA and PhD at Chelsea College. With Dr Maria Walsh, Mo is co-convenor of the Subjectivity & Feminisms Research group at Chelsea.