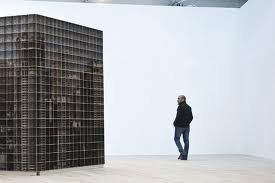 The problem with so much digitally generated art is that its technological ‘cleverness’ can dominate and eclipse the poetic potential and artistry of the artist. By this I mean the means of production should always be a contributory element to the work and not a substitution for the arguably more complex and sophisticated elements of art making. A few years back I witnessed some digital mosaics by one of my favourite lens based artists Joan Fontcuberta. These works very much fell into that trap and also failed to function much beyond a direct semiotic polemic. Images of Abu Graib and other gulf related media icons were made from digital mosaics of pornography. and other mass media imagery. Baudrillard’s concept of war porn dominated this show. Since then I have been waiting for someone to do something more sophisticated and intellectually challenging with the same technologies. Someone to take me to a higher plane of visual and semantic synthesis. The moment has arrived with Rashid Rana

Entering the space one is faced with an immaculate grid of mirrored squares which bounce your own image back at you in fragmented form. As you walk past the work it switches from iconic minimalism to reveal photographic images inset within the grid structure of high rise buildings from Lahore. They work sensitively together creating a sensual mix of high productive values and referent. Neither out shouts the other.

In another work ‘the world is not enough’ an unashamedly large and beautiful image is digitally stitched from images of landfill. It evokes a gargantuan pile up of waste, itself a visual paradox. The image can be equally read as a like a microscopic close up of fabric fibres from a forensic lab. Its flow and abstract elegance at first glance make the revelation of its content of wholesale waste all the more powerful and probing.

Upstairs a seductive and cosy large scale Persian carpet form is made up from mosaic images of animal slaughter houses and suffering. This mix of colonially encoded cosyness with gross viscerality has a well balanced semantic sting in its tail. Like the other works on show it is clearly offering possibilities for the viewer, whilst artfully avoiding a more blatant and overt prescription of meaning. It is talking not shouting, which for me is when one starts to listen and think.

The final work I will mention is called Veil VI. This an image of several women dressed in Burqas standing in a row looking towards the viewer. The encounter point is powerful, their strength in numbers, life scale and anonymity put the spectator on the back foot. The lack of information about the subjects behind their veils denies the onlooker any attempt at character analysis or deconstruction. Closer inspection reveals the images are made up from small internet porn images of women. Both these elements of the work image give little away. In one sense they are extremes, in another they share the parallel of being falsehoods. In neither does the issue of personality or notion of the individual identity come to the fore. This work triggers complex reflection on the objectification of women from a cross cultural perspective. This strategy of visual seduction balanced by a counterpoint of challenging content pervades the whole exhibition. Rashid Rana comes from Lahore in Pakistan. This is clearly relevant to the work, but above all Rashid Rana is a high calibre artist working with international concerns. A must see exhibition.