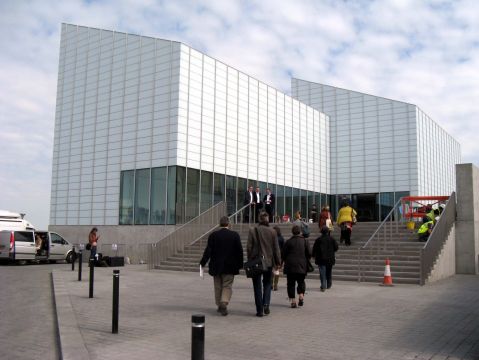 Amid the economic misery, the long-awaited opening of Turner Contemporary is a welcome good news story. Ten years in the making, it has survived changes of design, the abolition of one of its major funders*, and the usual range of bureaucratic processes, in order to open on time and on budget.

Surprisingly nondescript from a distance, it is not a landmark building as such, but one that is discrete against its background of sea and sky. Its interior is calm polished concrete, and the architects have managed to find the right nuanced balance between light greys, white and natural light to create cool airy spaces of both scale and intimacy. The building feels increasingly friendly the more time spent in it; although charmingly, it also has that ‘just moved house feel’ – as yet unlived in, it has a slight sense of emptiness and the over-neatness of the just built. Which of course, it is.

Daniel Buren’s installation Borrowing and Multiplying the Landscape hits full frontal from the main entrance. Yellow and white vinyl stripes frame an immense circle of sky and sea as you walk in, irresistibly drawing visitors to the window and spectacular view while emphasising the sun and weather patterns of the natural world. Of course this is the same view that JMW Turner looked out on, inspiring many of his seascapes: we are invited to remember and be similarly inspired.

The other works are upstairs. Inscribed on the treads is gnomic text apparently based on a phrase of Turner’s during his last illness “the sun is god” (or perhaps “the Son is God”). Transposed wordplay satisfyingly etched into concrete in black and white follows up the stairs: “good is the sun”, “the son is good” and variations upon.

On the upstairs mezzanine is the beautifully delicate Sfumato, by Teresita Fernandez. Made from graphite, referencing both geology and drawing, it makes an explicit link between earth and the transformative nature of good art. Translated, the Italian word means “to evaporate like smoke”, a title as evocative as the work itself. It’s a perfect use of space and light, with lumps of graphite glittering dully against the white wall and complementing the interior concrete tones.

The tour de force though is Ellen Harvey’s magnificent installation Arcadia. Recreating Turner’s Margate gallery to 71% scale, she has made a collection of 34 hand-engraved lightbox drawings of Margate, adopting the aesthetic of Turner’s engravings.

The drawing is wonderful in its detail and skill, full of industrial monochromatic atmosphere, the images Dickensian in their forensic analysis of form, movement and scale. Taken together this is a tremendous representation of Margate and the sea, romanticising the town and already mythologizing the new gallery as part of the landscape. Harvey describes it as “an OCD love letter to Margate”. It’s a re-presentation of Margate that fits very well into the regeneration context of the gallery and town.

Conrad Shawcross has created one for the boys, a beautifully engineered tri-armed machine – The Limit of Everything – that turns and extends with relentless rhythmic symmetry, creating moving shadows and atmosphere in a corner of the gallery. I think it’s very good but I can’t pretend to understand it, or his other piece. I do like curator Lauren Wright’s comment though. She told me “because it’s not useful it’s an artwork”. Fair enough.

For me, Russell Crotty’s installation is the weakest part of the show. Using drawing and automatic text, it lacks rigour in conception and execution. Plenty of other people seemed to like it though.

If I make this show sound easy and perhaps a little too literal in its interpretation of Turner, then there are reasons. The opening show for this gallery was always going to be a fairly tricky proposition. Turner Contemporary’s ambition is to stake a position in the national and international network of visual art institutions. In terms of content, this first show has to set the standard and indicate the future direction of the gallery. At the same time, it is crucial that it is accessible and relevant to the people of Margate and surrounding areas.

On a practical basis, it would have been impossible to plan a blockbuster show, given long lead-in times and the possibility of building over-runs. The opening show has therefore needed to be a flexible and manageable affair, one that could go ahead whatever eventualities came to pass. Hence the loan of one Turner – a sturm und drang affair of volcanic eruption (Eruption of the Souffrier Mountains). More significantly, four new works were commissioned from international artists, and two works are re-shown. It makes a modest but pleasing exhibition, covering the bases it needs to – the spectacle (Buren, Shawcross), the accessible (Harvey), the conceptual (Gordon, Fernandez) and the lighthearted (Crotty).

It’s a meaningful start that promises much more. For Turner Contemporary, this is the beginning of a long journey as a presenting venue, and this first show is enough to leave its diverse audiences wanting to come back for more.