Reverberlin and The Living Room - a-n The Artists Information Company 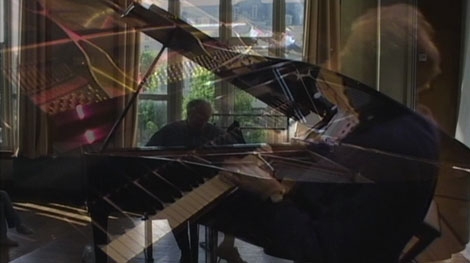 A central figure of the American avant-garde, Michael Snow is best known for the structuralist epics Wavelength and La Région Centrale. Considered one of the most influential experimental filmmakers of all time, the BFI presents a series of screenings of his seminal work to accompany the exhibition Yes Snow Show, which consists of several moving-image gallery works. The key facet tying these pieces together is the juxtaposition between sound and image, the fundamentals of which are, for Snow, inherently political.

Snow has an obsession with improvisational music – unsurprising considering his roots as a jazz musician. In 1974 he, along with Paul Dutton and John Oswald, founded the CCMC, a music ensemble dedicated to ‘spontaneous group composition’. Snow has often struggled to integrate the group’s music into a meaningful picture and sound cinematic dialogue and it was not until 2002 and the quality of a recording of a concert at Kunstwerke in Berlin that he resolved the issue.

The result is Reverberlin, a 55-minute film built on the editing and manipulation of images recorded of Snow and his collaborators. No footage was originally shot of the event and as such all imagery was constructed afterwards. The juxtaposition of sound and image ‘unlikes’ with ‘likes’ provides an array of fascinating synchronicities. These counterpoints draw attention to the music that one doesn’t actually hear. The concert is built of solos of about eight minutes long. Dutton – voice, first, followed by Oswald – alto sax, followed by Snow on piano. Images of each soloist, with manipulations, slowed down, speeded up, and superimpositions eventually become ensemble.

I found this displacement of space and time particularly interesting. The disjointed and confusing layering of Snow’s work is representative of the uncertainty of the current global situation, both at a macro and micro level. An almost Ballardian displacement of personal histories is in tension with the absolute knowledge we have, geographically speaking, of the wider world. What Nicolas Bourriaud refers to it as a ‘post-multiculturalist situation’, we are in a melting pot where a multitude of cultures are thrown together. There is no such thing as fixed identity, and the anxiety this produces – that one does not truly know oneself – can be found in Snow’s best work.

Next up is The Living Room, a 20-minute excerpt from the still incomplete Corpus Callosum, a film Snow has been working on for the past five years. As with Reverberlin the basic material was shot and then laboriously digitally transformed frame-by-frame producing a layering effect. Again the dialogue is ambiguous and disjointed yet totally engrossing. Featuring an eponymous living room decorated in horrendous blocks of colour, three figures are present each with their own ambiguities. Gradually digital storms overtake the room’s inhabitants and decorative objects, causing them to appear and disappear apparently at random.

Obviously notions of displacement and counterpoint are in keeping with Bourriaud’s conversations regarding the creolisation of cultures. The search for singularities within a context of standardisation is found within Snow’s films and is a vital component in their continued relevance and intrigue.