Reykjavik Slides (31,035) Every View of a City - a-n The Artists Information Company 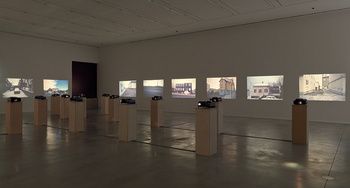 Talk about an Archival Impulse. Although Hal Foster didn’t write about this contemporary obsession with archives until 2004, Dieter Roth has been creating archives in all shapes and forms since the late 60s. Every View of a City is perhaps his most comprehensive one to date.

The Swiss-born artist is probably best known for his artist’s books and ephemeral sculptures (often made of cheese, chocolate and other organic matter prone to decomposition). He was part of the Fluxus movement, however the dark and political undertones of his practice distinguished him from the more light-hearted approach of the group.

This posthumous exhibition at Hauser & Wirth was put together with the help of his two sons, who together with artist friend Pal Magnusson helped Roth to conduct his recording of the city. When you visit the show, your first impression is that in a rather conventional way, it presents a set of slides of Reykjavik projected on the walls of the gallery. Nothing new so far. However, in what can only be described as an obsessive-compulsive twist, there are 31,035 slides – in other words, every view of the city, each one meticulously labelled and stored in projector rods.

Roth lived in the Icelandic capital since the 70’s and started this work in 1973, from what I can only see as a slightly obsessive fascination with the place. According to the gallery, the work spanned from 1973-1975 / 1990-1998, though one can only imagine, from the monumentality of the task, how long it must have taken. It is interesting that not one of the images shows the slightest sign of any living beings inhabiting the city except for plants, thus effectively ridding the images of the associations that we make when we view photographs of people. Instead we see 4 different views of a wooden house, deserted street views, an empty dockyard and many more snaps of what looks like a ghost-city.

Generally, Roth places his work outside of the linguistic approach used by Fluxus artists and seeks to question the formalities of art. Like Joseph Beuys (but with a very different methodology) he views life itself as art, where objects and experiences are not hierarchically prioritised. You could effectively say that Every View of A City is the perfect example – by “indistinctively” photographing as many views as possible of Reykjavik, he has created a new visual dictionary of the city.

My only criticism perhaps, is the lonely desk in the corner – an object, transposed form Roth’s studio, which shows part of the process of making this piece. However, like an archival shrine, it lies in the corner, unapproachable (you are not allowed to touch it) and unexplored. I’m not sure what Mr Roth would make of this.