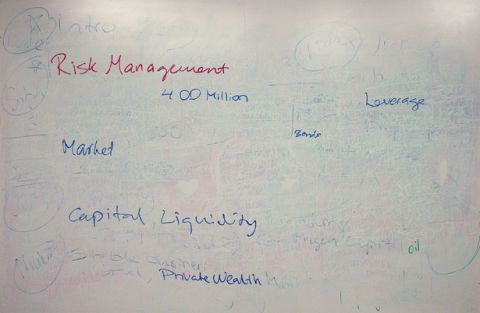 Art doesn’t usually look too hard at finance – it’s an uncomfortable relationship, and when artists such as Hans Haacke, with his work about the financing of American museums challenge this idea, it causes ructions; shows get cancelled. Risk Management, showing in a gallery inside a former Deutsche Bank office in London, doesn’t look as though it poses any such threat; but it did conjure up a friendly visit from Deutsche Bank’s department of Reputation Management. Art took a look at finance and finance came and looked back.

Bringing together the work of five artists, this show places the atmosphere of the exhibition within the bureaucratic corporate environment, and ensnares it within the realities of capitalism, and, kindly, the capitalists lend their multi-million pound empty building. The show’s coherence is in the connections between the works and their context inside the dysfunctional office. Abandoned words on a whiteboard display a business and banking vocabulary that speaks of current affairs – leverage, contigency capital, bonds, and the Risk Management that became the title of the show. A phrase comes to mind: “You manage the risks you take” – a recurrent line from a video piece by Berlin-based artist Ina Wudtke called “The Portrait of the Artist as a Worker” (2006) where she reflects on the financial complications that contemporary artists are obliged to deal with.

On the wall, a photograph of a middle-aged woman with her head covered, looks into the room, with an expression of straightforward scrutiny on her face. Her gaze, as captured by Swiss artist Beat Streuli in his photography series Bruxelles 05/06 I, seems to echo the question posed by curator Fatima Hellberg, in an event at the 2009 Arnolfini exhibition ‘Lapdogs of the Bourgeoisie’ – “Who can afford to be an artworker?”

The anonymous headscarved woman in Streuli’s photograph functions as a witness and an interlocutor in a room silently dominated by Deej Fabyc’s performance – See No Evil in the Mammon (2011). Fabyc makes a triple appearance in the space; once with a carefully staged desk and chair, now unoccupied, secondly with a video of the site-specific performance, at the same desk in the room; and thirdly echoed in the gesture in Dolores Sanchez Calvo’s oil painting, Incongruent Thoughts (2009). At a certain moment during the video piece, the works present identical images of a woman covering her face.

The portrait of a person covering their face with their hands is a portrayal of resigned despair of what the future holds, and of hiding from the truth or hiding from others the fact that one knows the truth. Sanchez Calvo’s painting brings to mind Van Gogh’s Worn Out: At Eternity’s Gate (1890) – a portrait of an old working man sitting in a chair, with face in his hands. In RB Kitaj’s painting of Van Gogh’s famous yellow chair, The Billionaire In Vincent’s Chair (1999), there sits the only person who can now afford to buy any work by Van Gogh, who, heavily influenced by the work of Millet, unflinchingly portrayed moments of true wretchedness and lives of poverty.

Daisy Delaney’s Sterling Destroyed (2010), a work disguising itself as an estate agents board, makes a powerful statement on the demise of the coin of the realm. The gryphon logo speaks of another realm; the City of London. The phone number on the piece puts you through to the Bank of England. And, if you’d like to call them, there’s a phone on the desk, reminiscent of Walter de Maria’s conceptual art work in 1968 where a telephone was placed on a gallery floor, with the message: “If this telephone rings, you may answer it”.

Marc Quinn’s icily beautiful Italian Landscape (2000), is a simulacrum of a continuous summer of flowers in full bloom, captured at the height of their beauty, and kept there forever as a depiction of a certain dystopic moment in time. The hyperreal death of these flowers is alluded to by the enormous vase of white lillies on the window sill. The heady aroma of the lillies’ signification of death completely fills the room, and meanwhile, at the window, you can look out at the cruel, unfair, silent landscape of the city.

Luminita Apostu (b. 1985) lives and works in Iasi, Romania. She is currently doing an MA in Interdisciplinary Visual Arts at the University of Arts in Iasi. Her research focuses on issues of public participation, audience theories and art studentship, as well as global and corporate identifiers in the art world. She is project coordinator at theartstudent.org - a platform for supporting initiatives by art students.Â