Script for a Close Review of Remote Places. - a-n The Artists Information Company 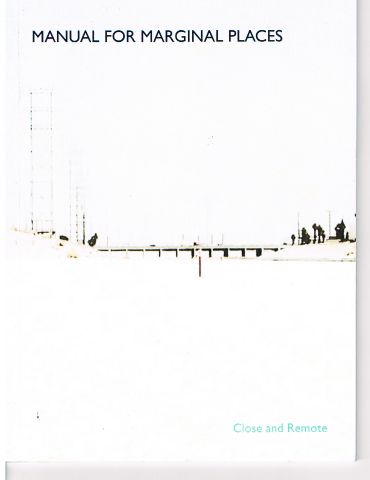 Script for a Close Review of Remote Places.

Close and Remote is a collaborative duo consisting of artists Sophie Mellor and Simon Poulter, for the purposes of Manual for Marginal Places Sophie Mellor has worked alongside Emma Cocker whom is a writer/artist and Senior Lecturer in Fine Art at Nottingham Trent University and whom Sophie has worked with on ‘Urban Wanderer’; a previous project from which a good deal of text has been re-used here. I only really mention this collaborative process as it becomes apparent that collaboration, or at the very least communication, is fundamental to the ideas put forward by the Manual and it is because of this insistence on communication that I am going to review the Manual for Marginal Places by creating a scripted conversation between the manual and some of its contemporaries within this sort of publication.

The Manual for Marginal Places is made up of four sections; an introduction, a collection of film stills again taken from a previous project (this time Close and Remote’s ‘Traverse’), there is Emma’s text Making Room for Manoeuvre; or Ways of Operating along the Margins and the collection of handwritten texts taken from ‘Urban Wanderer’ mentioned earlier. I find it useful to remember that

To be useful, a manual often needs to give the user an overview of how a thing works and then more detailed information on its application and maintenance.[1]

In this case the manual format is extracted from the mechanical and re-directed towards the desire or yearning for authentic experience.[2]

The other publications that are going to be participating in this conversation alongside the Manual for Marginal Places are:

A2B = Royal College of Art; From A to B (And Back Again): A Publication to Accompany the Exhibition Go Away: Artists and Travel; The Pale Green Press; 1999

And the Manual for Marginal Places’ abbreviation will appear as MMP. I will also have a voice in the conversation whereby I will act as an impartial voice and at times will speak as a practicing artist with an interest in the areas which are going to be discussed (this might become slightly less impartial – fair warning). The abbreviation for me will appear as RH.

This conversation takes place in a Hawthorne bush 1.5 hours walk from the northern English town of Barrow-in-Furness[3]. It is there we find Sophie Mellor as she starts the conversation.

SH – You can apply to your local council for housing if you are homeless or will be homeless soon. You are homeless if there is nowhere (in the UK or abroad) where you have the right to stay, or if that right will end in the next 28 days.[5]

MMP – I figured out it would be hard for a Vicar/Priest to turn me away as it’s a tradition for wayfarers and wonderers to turn for the church for a bed.[6]

RH – Were you correct Sophie?

RH – That was very kind. Is that similar to your average kit? What do you feel is missing?

Notepad, pens and stamps and envelopes

RH – After receiving the Manual for Marginal Places I left the house for a week, I took what I thought I may need and was surprised by what I didn’t use, I returned with several tins of food I didn’t eat!!! Is there anybody here who can think of anything that maybe useful when ‘roughing it’ that we have not yet mentioned?

EF – Venturing out on to the camp’s perimeter, we quickly learn to tread gingerly, in order to avoid the excrement amid the bracken, and the toilet paper hanging from gorse bushes. A big placard commands ‘Bury Your Shit’, but unlike the seasoned travellers, urban ravers haven’t come armed with spades.[9]

SH – It’s worth trying to borrow or hire a long ladder to fix roof problems. Ladders are always useful so it might be worth investing in one of your own.[10]

RH – I have noticed all of our participants here use fairly different language when discussing this selection of issues. You all also use different terminology to describe who you are and what you do, between you, you have presented us with guides, handbooks and as we are here to discuss a Manual. I wonder if those differences in terminology can be telling. I spoke with the Collins English Dictionary earlier today and it offered up the following definitions for the terms:

guide vb guides, guiding, guided. 1 to lead the way for (a person). 2 to control the movement or course of (an animal, vehicle, etc.) by physical action; steer. 3 to supervise or instruct (a person). 4 (tr) to direct the affairs of (a person, company, nation, etc.). 5 (tr) to advise or influence (a person) in his standards or opinions: let truth guide you. n 6a a person, animal, or thing that guides. 6b (as modifier) a guide dog. 7 a person, usually paid, who conducts tour expeditions, etc. 8 a model or criterion, as in moral standards or accuracy. 9 Also called: guidebook. a handbook with information for visitors to a place. 10 a book that instructs or explains the fundamentals of a subject or skill. 11 any device that directs the motion of a tool or a machine part. 12 a mark, sign, etc., that points the way. 13a Naval. a ship in a formation used as a reference for manoeuvres. 13b Mil. a soldier stationed to one side of a column or line to regulate alignment, show the way, etc.[11]

Handbook n a reference book listing brief facts on a subject or place or directions for maintenance or repair, as of a car.[12]

Manual adj 1 of or relating to a hand or hands. 2 operated or done by hand. 3 physical, as opposed to mental or mechanical: manual labour. 4 by human labour rather than automatic or computer-aided means. n 5 a book, esp. of instructions or information. 6 Music. one of the keyboards played by hand on an organ. 7 Mil. the prescribed drill with small arms.[13]

Although relatively dull; I do feel those definitions have enabled us to see why some of you refer to yourselves in the manner you do and more importantly why Close and Remote opted to use the word Manual. More than the other words used it implies a physical action. I feel had they written a handbook or guide we, as an audience, would have required much more solid instruction. Emma, could you please give us an example of the instructions you offered in your text from the Manual?

Wandering operates tangentially; it detours, dallies, takes its time. To wander is to drift, becoming a little aimless or unanchored; it is a tactic for getting lost. Its disorientation subjects the commonplace or unnoticed elements of one’s familiar environment to the estranged scrutiny of a stranger’s glance. Navigational aids and maps might be misused for wilful disorientation; guidebooks become tools for defamiliarization and mis-direction as much as for finding one’s way.[14]

RH – I think we can all agree that what Emma, and indeed Close and Remote as a collaborative team, wants of the publications audience is fairly clear, we are to take in the marginal, uninhabited and unloved spaces of the world and operate within them with due care and attention. However, I think we can also agree that the language used is far from being definitive instruction. If we look at some of the handbooks with us today, of which there are three, we’ll see that there is often a much clearer sense of what we are expected to do than that of the points put forward by the Manual for Marginal Places. We have already heard from Squatters Handbook who have given some very formal, to the point advice which I am sure will be useful for many. If we take a moment to look at Handbook for a Mobile Settlement and its approach to instructive text which is quite different to the others we have looked at and spoken to thus far we may be able to pick up some points where the Manual for Marginal Places could have become more useful. Firstly Handbook for a Mobile Settlement is considerably smaller than the Manual for Marginal Places, this means that it can actually be taken to marginal sites (in relation to the ‘art world’) and was indeed even produced in one; Grizedale Arts, located in rural Cumbria. It then proceeds to talk its audience through a series of very direct actions. If you could give us a few examples please Handbook.

RH – Admittedly some of those points do not seem quite as direct as I suggested but when viewed alongside the diagrams they become very clear. This is something the Manual lacks; a very close connection between image and text (with the Close and Remote pieces the text and images were even taken from different projects). The format of the Handbook for a Mobile Settlement is equally more relevant to the themes present within each publication; it takes the form of an unfold-able series of pages bound with an elastic band. When each page is opened up its double sided spread explains each step of the procedure to building a mobile settlement, much like a set of instructions from an IKEA bookcase, it also become reminiscent of a map which is completely suitable given the content. The levels of detail present here makes Close and Remote’s publication seem a little dull, even without this comparison the low resolution film stills used throughout Manual for Marginal Places make the publication seem slightly duller than it is when fully engaged with; although this may be a prejudice I hold against film stills in general. I’d much rather see actual footage.

The other Handbook we have present here today is the Interrogation: Walsall Handbook, closer in format to Manual for Marginal Places than Handbook for a Mobile Settlement was but visually more engaging than the Manual. It was however produced after a series of events had unfolded and is hence very documentation heavy, this makes me wonder if its position as a Handbook is actually deserved, after all it would be difficult to re-stage many of the events discussed. For example could you please explain the Uniform’s you used Anna?

IW – On arrival, each of the selected artists were issued with a uniform. The uniform was designed with 3 objectives in mind. The beret referenced ‘The Activist‘ while the moustache was ‘The Disguise‘ and finally the T-Shirt was meant to make the artist feel part of ‘The Team‘. Overall the idea of asking the artists to change out of their normal clothes and into the uniform was that the artist might leave their usual coat at the door – and perhaps their usual working methodologies.[16]

RH – So what happened then Anna, when the artists had got into their uniform?

IW – The night before each mission, the artists received a text message containing instructions.[17]

RH – So in fact it would be impossible to re-stage these events. The other Handbooks and the Manual provide possibility that things can happen in the future, which as we saw earlier is fundamental to this sort of instructive text or publication.

[14] Cocker, E; Making Room for Manoeuvre; or, Ways of Operating along the Margins; taken from Manual for Marginal Places; Close and Remote; 2011; pp.40