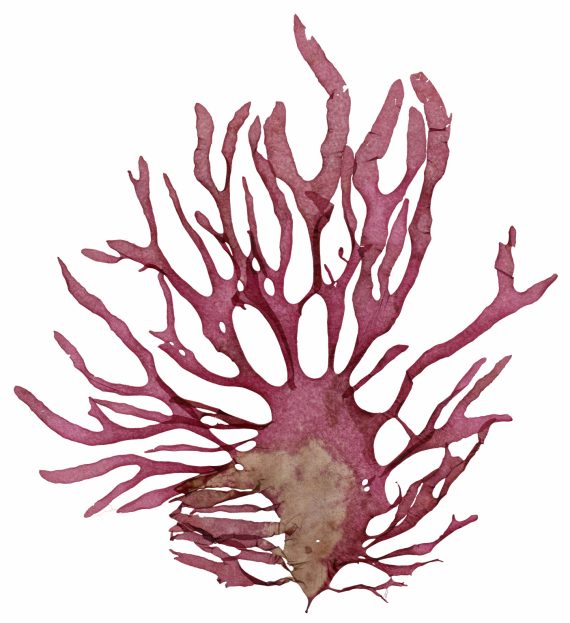 Flattened, vivified illustrations of seaweed and other aquatic flora crowd my vision. I am face to face with ’Into the Sea Forest’, Sarah Gordon’s floor-to-ceiling printed cotton work. It hangs, curtain-like, though it cannot be drawn. Instead it moves only in response to the opening and closing of the gallery’s nearby automatic door, giving the illustrations the appearance rippling in the current. As I turn away to reset my focus, my eyes skim across the exhibition and rest in the opposite corner of the room, on ‘Wrack Zone.’ Jo Crook’s wall-mounted seaweed piece is named after the tidal range along a coastline where seaweed is cast ashore. ‘Wrack Zone’ employs a similar layout to ‘Into the Sea Forest’, flattening the seaweed against the wall where it appears to reach upwards in search of the ceiling; the surface of the sea; sunlight. The seaweed is hung in a manner reflecting the historic seaweed collection on the adjacent wall; a manner that runs perilously close to distracting attention from the natural beauty of the subject. Nevertheless, Crook successfully elevates her subject from what she describes as its ‘usual place as part of the background rather than as compelling individual objects’.

It is no coincidence that Sea Garden, an exhibition made in response to the 19th century seaweed collection at RAMM, contains work made almost exclusively by women artists. At that time, women were in the main denied access to education and were not encouraged to contribute to scientific study, the field of botany was an exception to this, offering women a way in to science through recording, collecting, and sorting samples from the field. One of the two male artists included here is John Wedgwood Clarke whose collaborative work with Susan Derges is ‘Ocean Flowers,’ a one-off artist’s book. ‘Ocean Flowers’ is a sensitively rendered piece of work whose uniqueness places it behind glass, though it is at least framed in a way that offers the book protection while showing every page to the viewer.

Bryony Gillard’s 15-minute film, ‘Unctuous Between Fingers’, follows a group of women as they gather, sort, and press seaweed. The film applies an up-to-date context to the stories behind RAMM’s seaweed collection and in doing so pulls together the many strands that make up this exhibition. While primarily documenting a process, ‘Unctuous Between Fingers’ shines a light on seaweed gathering as a social practice; a ritual whose deeper purpose is one of bringing together a disenfranchised, under-represented group of women, while also enabling that group to connect with nature. In 21st century Britain much is made of the pursuit of such outcomes in the name of mindfulness, and what could be more mindful than this delicate work of separating frond from lobe, fanning leaves, and making a judgment call when overlapping occurs? Gillard’s film captures the essence of RAMM’s collection, one to which the soundtrack is women working, talking, and laughing together.

Of the remaining work in Sea Garden, Dorothy Cross has three pieces, each of which considers human interaction with nature in its own way. Her film ‘Jellyfish Lake’ offers a mesmerising six minutes of underwater footage in which countless small (from cumquat to grapefruit-sized) jellyfish swim around the artist’s neck and shoulders. As they pass over the surface of her skin and through her hair the jellyfish appear to be inspecting this newcomer into their environment. I’m sure it is only in my mind that one of them hovers far longer than the others, before quickly propelling itself onwards once it has deemed this alien visitor non-threatening. This scene, in which a semi-naked woman is surrounded by myriad jellyfish, ought to be fraught with tension but is in fact one of serene tenderness. Cross’s second piece, ‘Finger Crab’ is more light-hearted, comprising a small crab cast in silver, one of its claws replaced by a human finger. Again, Cross is playing with our basic human instinct of fear around an animal we are told could be dangerous. To replace the crab’s claw with a finger is to rouse that overriding fear one has when confronted with a live crab, i.e. that it might nip off one’s finger and do away with it.

Cross’s third piece in Sea Garden is ‘Nightdress’, in which she has placed a dead jellyfish over the stomach and groin area of a cotton nightdress and left it out in the sun to dry. The resultant crimson print is one that again speaks of the human relationship with nature and of fertility, menstruation, and that deep connection within our species that goes far beyond the understanding of science. The nightdress in the image floats at an angle not quite upright. Its insides – its front, back, and seams – are at once all visible. ‘Nightdress’ is both a nightdress bearing the image of a jellyfish and a jellyfish itself. Only the tiniest of leaps is required to imagine the gown bobbing along beneath the surface of the ocean before propelling itself out of the frame. A feature of Cross’s work is that there never seems to be any room for a ‘what if?’ The ideas carried within each piece are exemplified in both the medium and the method of delivery, and that is true of all three of the pieces of hers that have been included in Sea Garden.

While taking in further examples from the collection and other contemporary work such as Mikhail Karikis’s wonderfully circular ‘Breath Portraits’, in which he paints portraits of elderly female pearl divers, each one completed in the time he can hold onto a single breath, I find myself repeatedly drawn back to ‘Wrack Zone’. On the beach and around rockpools seaweed is such a slippery nuisance to me and my small children that I realise I have never taken time to stop and inspect it. At times the colours cause me to forget that what I am looking at is a plant. I find myself perceiving a collection of subtle watercolour representations, each one slightly different to the last. It is no surprise when, later in the day, I see similar work framed and on sale in the museum’s restaurant. It is only when I recognise a darker part of one of the larger specimens to be its own shadow that my perception is pulled back into three dimensions.

From across the room I spy the opposite view to that which I had on entering the gallery, as Sarah Gordon’s ‘Into the Sea Forest’ comes alive again when repeatedly brushed against by a crowd of visitors that all seem to want to enter the gallery at the same time.

The climate crisis is implicit in work that deals with this subject matter, if not directly addressed by the work. The topic was more evident in Fertile Thinking, a discussion event at the beginning of the show’s run which included Professor Mike Allen, the world’s leading seaweed scientist. Perhaps seaweed will play a less peripheral role in our lives in the years to come as rising sea levels move coastlines further inland. Susan Derges’ ‘Tide Pool Series’, a photographic series of hyperreal studio-built images of rock pools, is perhaps the most poignant work in this regard, as it focuses on these transitional, inter-tidal environments. The tidepool is by its very nature a transient place, but in a warmer world today’s tidepools will not only empty and refill twice daily, they will be completely submerged as new pools emerge along new shorelines. The seaweed collection at RAMM may have been collected in the name of science, but Sea Garden successfully builds an art exhibition around this collection that says more about our relationship with nature than it does about nature itself. And that is something that can be guaranteed amongst all this climate uncertainty; we will continue to record and document the environment, adding, as Sea Garden does to this often overlooked area of marine life, ever more interpretations to the story of humankind’s relationship with and within nature.

This review was commissioned by Lara Goodband, Contemporary Art Curator and Programmer at RAMM.