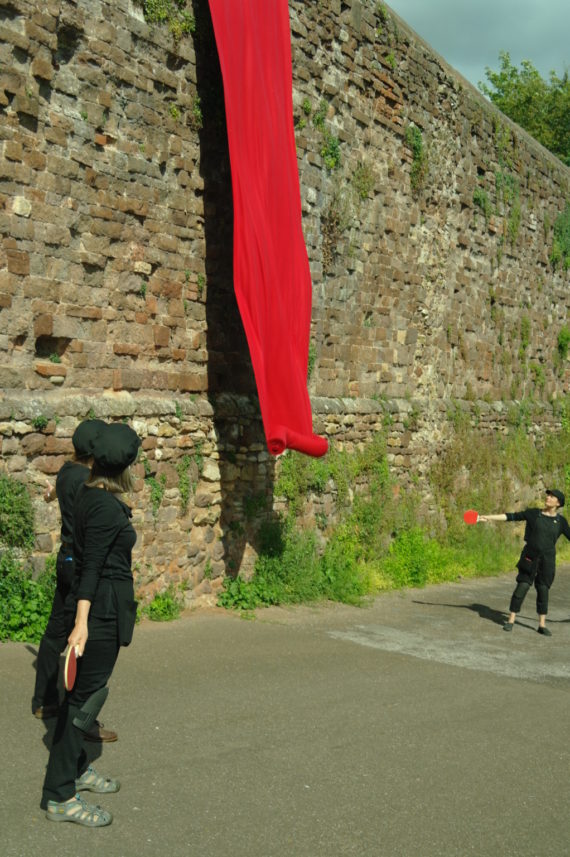 It’s 1pm on a beautiful day in early summer, and a small crowd has gathered around an inconspicuous spot in Exeter’s Northernhay Gardens which, at just over 400 years old, is the oldest public open space in England. We are here to see the first of four iterations of SERGE/SURGE, artists’ collective Preston Street Union’s answer to a call from Exeter’s Royal Albert Memorial Museum (RAMM) for a response to the theme of migration in relation to items within its collections. Preston Street Union were particularly interested in the trade of artefacts and skills related to Exeter’s historic wool trade.

A signal is risen; a red paddle against the green and grey backdrop of the park and city walls and in a loose march, five players arrive. Stopping in front of their overseer with their backs to the ancient wall, they await further direction. Dressed all in black, they all wear the inimitable soft, flat-topped mariner’s cap worn by prominent 1910s Bolsheviks and made famous by the Beatles half a century later. With paddles raised to cover the right breast, the five stand in line long enough to make you think about looking around for clues, but before too long the central figure is signalled forward by the overseer. She turns to face the remaining four figures, and after another long pause, raises her paddle. The four turn to face the wall, at the top of which additional members of the group have appeared, and together they raise their paddles briefly, before parting to form two opposing ranks of two, creating an aisle perpendicular to the wall.

A brief pause, a one second whistle. Then action. A shock of red, at once bright and deep, spills over the wall and pours down towards the floor, which it hits with a thump, before unravelling out between the standing figures. Shortly after that the remaining fabric follows, and as the entire 15 metres of it falls to the floor, the wall is restored.

Then a slow and meticulous cleaning and gathering of the red, which turns out to be the titular serge, a thick, felt-like fabric most recognizable from its use in ceremonial military uniforms. The group has now swollen to ten members, some of whom are on their knees, picking loose grass and flecks of dirt from the cloth as others hold it tight and roll it. The performance concludes as the serge is hoisted onto the shoulders of two of the cleaners and marched out of the park in silence. An audience member is heard asking a friend ‘can you translate that for me please?’ and her request is not unreasonable. Devoid of the context of the press releases of Preston Street Union and RAMM, this and the other three of today’s subsequent performances felt as much a political protest as anything else. To ask for a translation, though, is to deny yourself the opportunity of reading the events that have unfolded in front of you.

The Wall was breached and a red curtain surged over it. In the day’s final performance, the curtain became a red carpet, laid down as a runway before a table at which Exeter Pudding – a suet, tapioca, and jam concoction that wouldn’t have been amiss in the school dinners of my 1980s childhood – is shared with anyone that wishes to partake.

In art as in cooking, the importance of provenance has risen significantly in recent years. When art is placed or performed outside a white-walled gallery space, it must now respond to the place in which it is located or occurring. Site-specificity is where it’s at, both literally and figuratively speaking. Preston Street Union’s response to RAMM’s commission is no exception to this, taking the museum’s theme for 2019, migration, and locating their project around the city wall. This one word – migration – is worn heavily by this piece, and its influence on my real-time response to the work, for good or ill, is too great to overcome. Later, the press release tells me why this event is happening, and how PSU were drawn to a type of woollen cloth whose uses ranged from military dress to trading in order to build relationships with indigenous people of North America. The provenance of this piece is important, then, tying in with both the theme of migration and that of exchange; of war and peace, and of the ‘generous heart and open hand’ inscribed on the statue of 19th century Devonian MP Sir Thomas Dyke Acland, who watched over the initial performance here in Northernhay Gardens where we all began four hours earlier. That same tribute was embroidered in red on the tablecloth for the closing event.

What did passers-by make of SERGE/SURGE, though, and particularly those who didn’t request a ‘translation’ of the day’s events? These public performances played out to a knowing crowd, but each occasion was not without its share of walk-up viewers, drawn in by the attendant crowd and the lofted red paddle. The spectacle, ten figures dressed in that subversive pseudo-military style, wearing the flat-topped mariner’s cap that screams left-leaning activist, unfurling a giant red banner over a city wall, is loaded with political imagery. At a time when both sides of mainstream British politics have parted with the centre-ground, when Brexit has dominated the political agenda for three years, and a week before Donald Trump’s state visit to the UK, a political reading of SERGE/SURGE is unavoidable. These acts by Preston Street Union, which were in each location identical, only varying in the height of the wall and the effect that had on the fabric, speak loudly of that which is in their name, ‘union’. They had me considering the value of teamwork and collectivism, of defiance, and of resolution. And perhaps even revolution.

This review was commissioned by Preston Street Union to both document and engage critically with SERGE/SURGE.
See individual photo captions for credits.