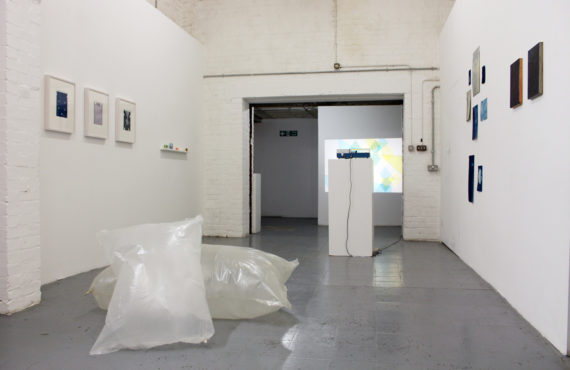 A review by Tim Barnes

The problem we have in expressing a concept like the void is that we can only express something absolute by using a language that can only present the ideas of nothingness or the infinite within the framework of our own familiar existence. A good definition is impossible to pin down especially in a modern world now understood in largely secular terms.

Perhaps a concern for contemporary artists is to make art in the knowledge that the world is not always what it seams to be, that it’s complicated and the relationship of how we make images of it should always be called into question. Artists today may even be searching for an equivalent to something as authentic as a religious experience would have been in the ages before the enlightenment and in the absence of some divine figure ask, with what do we fill the vast emptiness left behind?

Like the active silences plotted in music or the pauses punctuating a sentence, the gaps and spaces seem loaded with significance in Hannah Luxton’s paintings. Her vacant compositions are perhaps characters belonging to a wider visual lexicon. Markers or pictograms might seek to open a conversation with something distant and mysterious, reminding us that we are language animals. Our humanity is uniquely defined by the dignity of speech, communication and the expression of images but in the face of the void, the power of eloquence in speech drops to a naked cry and from that cry, would eventually ebb into silence.

The breath of empty space can be felt in everything. Two paintings by Linda Hemmersbach, ‘Towers’ and ‘Alone in the Storm’, do something and nothing at the same time. As though we are confronted with an object too large to comprehend, her subject makes a departure from the frame. Isabel Moseley’s ‘Window’ bounces between presence and absence. A sculptural installation consisting of two transparent plastic pillows filled with air may playfully suggest a piece of the void has been conquered and captured or even might present the whole problem to us in microcosm.

Fiona Grady’s egg tempera wall drawing mimics the shapes and angles found on a nearby concertina lift shutter. ‘Spatial Shift’ is a geometric composition invigorated and animated by projecting an alternate composition over the top of the original drawing. Something observed from the space and something more ephemeral share in a reciprocal, conversational exchange. Is there a structure in formlessness? Are we related to something infinite or not?

All these artworks must emit a presence in order to reflect something absent. It’s a paradox which allows artists to thrive on methods of un-building, of deconstruction and of counter-creativity. A thirst for something absolute has been a constant in human affairs and sometimes in this creative rift, artworks can seem more like coins lost in a bottomless fountain. Artists operating today under a long since shattered delusion of religion, now approach the void by being creative with the fragments of language and image left behind. The results of which have exploded into a multitude of different forms.