She Lay Down Deep Beneath the Sea, Tracey Emin - a-n The Artists Information Company 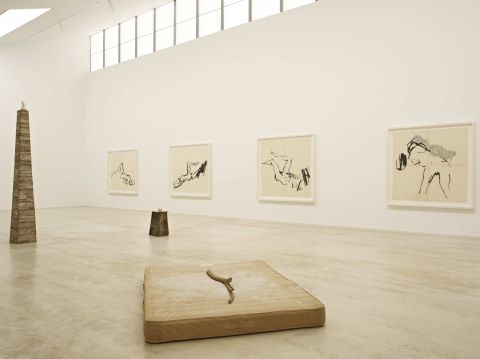 Margate was sunny the day I visited, the sea blue and green. These are the colours of Emin’s first solo exhibition in the town, She Lay Down Deep Beneath the Sea. Emin has produced a new body of work for the exhibition which comes a year after her comprehensive survey exhibition Love Is What You Want at The Hayward Gallery. The work, mainly wall-based with a few neons and several sculptures, is shown alongside a selection of female studies by JMW Turner and Auguste Rodin. Rodin’s The Kiss has been on display in the foyer of Turner Contemporary for a year now, on loan from Tate, and will be returned in September, marble white against the enormous windowed backdrop of the coastal waters outside. This is one of the specialities of the gallery- the ability to work with the natural environment and have the viewers consideration of the artwork roll and pitch with the mood of the sea.

She Lay Down Deep Beneath the Sea opens with a green neon of a reclining woman on a sofa or bed and a small acrylic with the words ‘I said no’ painted mossy green. The loose lines of the neon turn the image into a sketchy landscape, a postcard juxtaposing the flat horizon outside the window facing it. The first gallery is white, with multiple paintings, ink drawings and strokey-soft embroidered calico’s, words and poem phrases in blue and black- ‘Relax’, ‘I’m Telling You It Hurt’, ‘She said there is nothing left. nowhere to go but here’. The sprawling woman recurs, sometimes masturbating, skin and bone rendered in lines. Some are gaudy, a wobbly balloon blue heart with ‘When I was last in love’ written inside, naive and watery, sincere and heartbreaking. These works look like they have been made quickly, automatically, with misspells and a gushing quality. The Hayward retrospective out of the way, it is almost as if, now, with old work considered and chewed upon, Emin’s work has been allowed to move away from the brash and refine itself, simplify itself, abstract itself. The work feels matured in many ways. I have never noticed, for example, subtlety of colour with Emin and this has an effect on the kind of emotions that are displayed, soft blue, fern, forest, teal-greens. Less visceral, the violence and anger understated. The colours evoke another mood in Emin’s new work, one less calm, uneasy and slighty un-nerving, undertones of a horror-film.

In the second gallery, objects are introduced to the work, props of some sort. The walls are painted light murky green. A plinth of wooden tiles holds a clay figure or a stumpy collapsed penis-like tree branch (Dead Sea, 2012). Plinth-top sculptures are continued in the final room also, one holds a pomegranate object and the other a squashed thumby head. A browning mattress, the label marked ‘Heal’s’, lies on the floor. In the centre is an indented mark of a tree branch, the colour as if the branch has seeped out into the fabric. Dead Sea is the obvious partner to the previous room’s metal bath with rusty stain up the back and union jack flag inside. The works title, The Vanishing Lake,is both the title of Emin’s new novel and a reference to a lake near her home in France. This biography continues in self portraiture, with several monoprints on paper- Emin as Picasso’s muse Marie-Theresa Walter. Grecian and angularly beautiful, multiple eyes, ears, vagina’s and cross x-kisses.

It’s understandable that Turner Contemporary would want to historically contextualise the, sometimes explicit, use and actions of female figures in the exhibition. The darker corridor-like Irene gallery, where the Turner and Rodin drawings are located however, is the least successful part of the exhibition. I would have liked to have seen Emin’s work in direct conversation with these drawings, they feel relegated. There are, however, moments of illumination in these works, Rodin’s Sapphic Couple Embracing (1890) shows a couple’s awkward embrace, the figures look like they have been dug from Pompeii or caught in a Heathrow body-scanner. This capturing of a blurred bodily moment emphasises both the movement and stillness of, in particular, the four embroidered panel flags of the final room, Cave Woman, these lines show a woman falling through space, abstracting as she goes. I don’t think this shows Emin in freefall, instead there is both a security and a freedom. I get the feeling that Emin has never been more sure of herself.