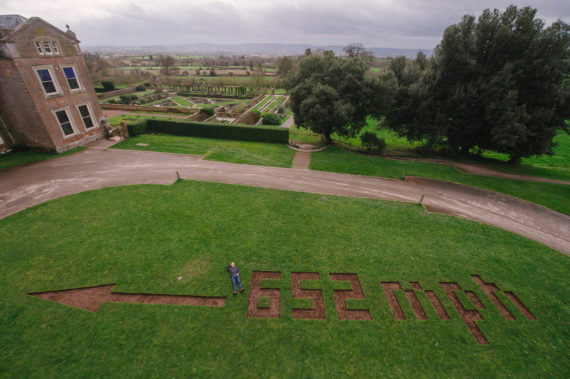 At 51 degrees north – the latitude of Hestercombe House and Gardens – the speed at which the surface of the earth is moving through space is 652mph. I know this because for his earthwork Earth Spin #2: Hestercombe, Simon Faithfull has cut the number into the front lawn, preceded by an arrow pointing eastwards. It’s a bold incision, and a spectacular foretaste of what lies ahead in this collection of works from across Faithfull’s 25-year career.

In an online video in which he discusses the work on show at Elsewhen, Faithfull says, ‘Within my work, more and more, I’ve been thinking about my place on this planet…in a global context.’ I imagine a furiously political body of work, though from what I already know about Simon Faithfull, his practice is anything but political; he is concerned more with location than place. That is to say that he uses his practice to locate and relate himself as a figure on this unimaginably huge ball of rock and water as it spins and hurtles through the blackness of space at unimaginable speed.

Faithfull addresses the sheer scale of the planet that he ‘finds himself on’ by travelling across its surface. He has crossed continents while adhering to the Greenwich Meridian; he has travelled from Liverpool, England, to Liverpool, Nova Scotia via container ship, and he has taken a two-month trip to Antarctica. While on these journeys he collects his thoughts in diary-style entries that he says, ‘describe places and moments around the planet’. Collected in various iterations, Places (2019) includes four such journeys, they are the Liverpool and Antarctica trips, the Greenwich Meridian walk, and ‘Postcards from Berlin’. Entries are presented in stacks of A5 printouts, placed around the perimeters of four large, white, plinth-like tables. The contents varies from factual ‘The sun has stopped setting and Christmas is approaching’, to poetic, ‘The sun chased after us through the sky…Pulling night across the ocean behind it’, and the single, overtly political moment in the entire show, from his journey down the Greenwich Meridian across Western Africa, ‘I am advised that the jihadist war (in Mali) has left (it) too dangerous for a white European to travel through.’ Written on an aeroplane high above Mali.

Viewers are invited to take the printouts, and their differing heights indicate that some pilfering has occurred. I took half a dozen of my favourites and later wondered what I would do with them. Do I frame them? Put them away in a box? Perhaps I should recycle them.

Places shares its space with Sahara (The Sound). This audio work, from 2016, is an attempted replication of the soft whine of the Saharan Desert wind. A short description explains that Faithfull soon realised that the sound he could hear was caused by the cavity of the ear itself. A photograph is displayed showing a home-made recording device constructed from a woolly hat, a Coke can with holes punched into it, and a plastic bottle into which the microphone is inserted. Each of the works in this room share the common fact that they are depictions of that which can only be recorded by alternative means. Faithfull’s written accounts of his many journeys only scrape the surface of his lived experience, and he has found a unique solution to the question of how to describe the gentle but constant sound of the wind in the Sahara Desert.

The playful curiosity that impelled him to make that wind replicator is at the heart of much of what Faithfull does, but is more conspicuous in his early works, through which we are given glimpses into the mind that settled on ‘artist’ as a job title (way of life). Inverse Map (1999) is a map of Europe in which the landmass has been recoloured and renamed in the style of bodies of water, while the oceans and seas that we know have been divided up and given nation-like names. Going Nowhere 1 (1995) is a short film in which a figure sets down a camera and walks towards the horizon until he disappears. A few minutes later he reappears on the horizon and spends a couple of minutes walking back towards the camera. The project was sparked by the question, ‘how can you know the light in the fridge turns off if you’re not there to see it?’ and so, early career Simon Faithfull tested this by couching it as ‘how can I know if this part of the world is still here when I am not?’ and made this film. Works such as these may not resonate in the same as a journey across an ocean, but they are fun and look like they were fun to make, too. Not to say that mid-career Simon Faithfull isn’t prone to indulging that child-like curiosity from time to time, though. His 2014 project, Quenanville as Antipode is evidence of that. The Antipodes Islands were so named because they are the closest land mass to the antipode (opposite point on the globe) of London. Faithfull turned the theory on its head and discovered that the true antipode of the Antipodes Islands falls off the coast of northern France, near Cherbourg, with the exception of one 500metre long uninhabitable rock which, when projected through the centre of the earth, actually maps onto dry land. Quenanville as Antipode is a slideshow that charts Faithfull’s progress as he walks the perimeter of the island, through farmland exactly one Earth’s diameter away from its location. We watch as he, with phone in one hand and ladder in the other, traverses fields of cabbages, green pastures, and dirt tracks. He climbs through hedgerows and scales houses and farmyard outbuildings.

That same curiosity is present in 30KM (2003), a 30-minute film projected onto a circular screen on the floor of the gallery space. As I entered the room I saw on the screen the familiar patchwork of fields that one associates with aerial views of the English countryside. The occasional rash of visual interference and white noise coupled with the circular image on the floor in otherwise darkness gave the impression of being in a capsule bound for space, only the image of the fields was barely changing. Were we moving at an imperceptibly slow speed? Eventually, though, the fields diminished in size and merged into a single green entity while our slow rotation revealed intermittent flashes of coastline. The information card on the wall told me that the film ends with ‘a glimpse of the curvature of the earth and the blackness of space’. This moment is brief – there are a few glimpses of space before the film cuts out. Back to the beginning and a lone figure stares up towards me. He releases me and before long is a dot in a field, one field becomes two, then five, and then, after a few minutes, the patchwork reappears. The film’s concept alone would have been enough for me, but nowhere near as moving as the film itself, even if all the action is in the first and

Only once was the on-going climate crisis evoked in this exhibition of work addressing the relationship between one human and ‘the planet he finds himself on’. Going Nowhere 1.5 is a film from 2016 featuring Faithful circling the perimeter of an anonymous sandbar in the North Sea off the coast of Norfolk. The tide rises as Faithfull circumnavigates this tiny island in ever-decreasing circumferences until eventually he is standing in water, almost spinning on the spot – the film cuts to black via an ever-decreasing circle that reflects the shrinking sandbar before eventually engulfing the entire image. On the wall outside the room there is a single digital photograph of Faithfull, taken from the lifeboat that was standing by to rescue him from the rising tide, up to his chest in water inexplicably continuing with his task, despite there being no perimeter left to circle.

The works collected for Elsewhen give a timely survey of the work of an artist that has been engaged in his singular pursuit of one question for over two decades. With Quenanville and Earthspin, Faithfull bridges the gap between science and art, and successfully treats the planet like the object he says it is. These experiments have little time for abstract concepts like nation-states and borders, but they do crop up from time to time, and while Elsewhen includes much to wonder at, I can’t help feeling that I this kind of work should have made me smile more than I did. Faithfull’s early works betray a humorous side that seems to have been lost somewhere along the way during his many travels.