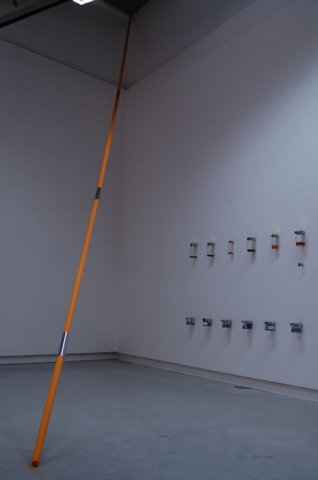 Megan Calver has been standing in her garden at dawn, holding up a yolky-yellow pole almost as tall as her house. She’s been using it to mark a period of attention to birdsong: "The song is the flag, the colour that the pole hopes to match."

As part of this process she collected her own urine and, before it discoloured, looked for matches in objects to hand. Some, such as leaves and flowers, decayed. Others such as a metallic egg, a bone-handled knife or a small bottle of perfume have lasted. All objects were scanned and matched in DIY-store paint mixes. In the gallery she lines up jam-jars of urine, objects (or absent objects) and tins of household paint. And props the pole across the gallery, where it looks like a misplaced fishing rod.

She didn’t make a sound recording, she didn’t film herself, she didn’t make notes. In fact this whole exercise seems to say a lot about restraint – the unused colours, pristine in their pots. What we can do and perhaps more importantly not do as artists. How we deal with the difficulty of making sense of the world.

This work is systematic, ritualistic, like science. But it isn’t science (or even one of those odd role-plays of science that artists sometimes get embroiled in). Instead, like poetry, it conjures up fluid associations from within a rigid structure (it even has lines). Much of the meaning ends up in between what’s physically there.

As the result of a sequence of events that gently coaxed the world into becoming art, there’s the sublime and the ridiculous, the academic and the domestic, all on one white gallery wall. Birdsong and wee. The liquid song and the stream of piss. Art (or song) as a kind of necessary excretion.

Calver’s work sits alongside that of five fellow 2008 MA graduates. All seem concerned in some way with the recording the present, yet finding it already absent. Val Bogan explores memory and consciousness through the meeting of anaesthetized patient with surgeon. Carol Harvey has documented the closure of a local maternity unit in collaboration with its staff. Ines Azagra has gathered piles of dust from the homes of distant friends and family and arranged them in a corridor where they are vulnerable to passing feet and draughts. Susie David shows us a dialogue with water – lapping, falling, flowing, condensing.

Sue Coulson’s work focuses on the (dis)continuity of identity. In one piece, she’s filmed herself doing a slow hand-clap amid a mess of white powder which explodes between her palms at the moment of impact. She’s gloved, masked and wearing extreme eye make-up. I don’t know precisely why she’s doing this and, for once, I don’t want to.

I like it just the way it is – mysterious.